We have to wait till Sunday to see that which team will emerge as the winner but for now, let’s have a look at biggest fights between the two teams on the cricket field 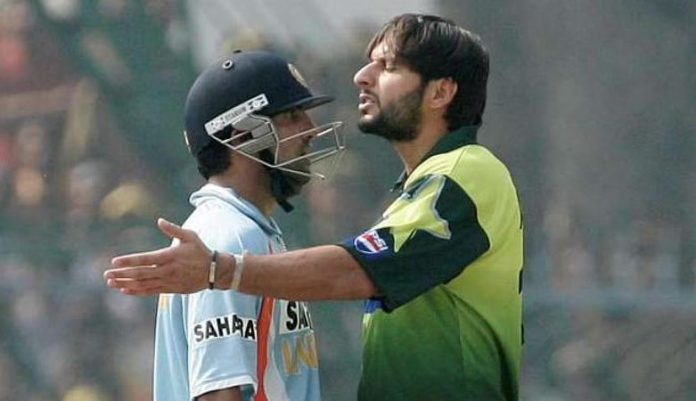 Dubai is geared up to experience an epic clash between the arch-rivals India and Pakistan on October 24 in their opening match of the T20 World Cup. Both the teams are sweating it out hard to seal a victory here at any cost.

We have to wait till Sunday to see that which team will emerge as the winner but for now, let’s have a look at biggest fights between the two teams on the cricket field-

This was a World Cup match in Australia where the Indian wicket-keeper Kiran More was appealing a bit too much behind the stumps to create pressure on Javed Miandad. Later, he was too frustrated and angry that he stopped the bowler by showing his back to the bowler and had a war of words with more.

Miandad also complained to the umpire and got ready to play next bowl. To make fun of More’s appealing, he started jumping after pushing the ball towards the offside.

In a world Cup match against India, Pakistan stand-in captain Aamer Sohail was smashing Indian bowlers to all parts of the ground. In an over of Prasad, he came down the track and hit a boundary.

After hitting the boundary, Sohail gestured towards Prasad that he would hit him through the same region off the next ball as well, but as it turned out, Prasad actually cleaned up Sohail on the next ball and gave him an angry send-off.

Batting at no. 3 first time, Mahendra Singh Dhoni had hit out 4 at Pakistani leg spinner Shahid Afridi’s delivery. Following which, he didn’t like it and said something to Dhoni in quite an angry fashion. In response, Dhoni smashed a 6 in the same region again.

Afridi and Gambhir have not been seen playing against each other after the bilateral series in 2007 where they got involved in an ugly argument with each other.

Afridi was not happy with Gambhir’s running towards him while coming to the non-striker’s end, while Gambhir felt that he was running in the straight line and Afridi had to move aside. The argument between the two was eventually stopped by the on-field umpires.

In an under pressure match in Asia Cup, Pakistani pacer Shoaib Akhtar was bowling with an extreme pace to wipe out India’s tail as the game was pretty close with India having lost a few wickets.

But, at a very crucial juncture of the game, the Indian tail-ender Harbhajan Singh hit Shoaib for a huge six which definitely didn’t go down well with the Pakistani speedster, as he had a verbal altercation with Harbhajan.

the decision was not very clear as it seemed that the ball first hit the bat before hitting the pad. However, even after review by the third umpire, it was given out as, the review didn't clearly confirm whether the Indian skipper is out or, not out.
Read more
Load more