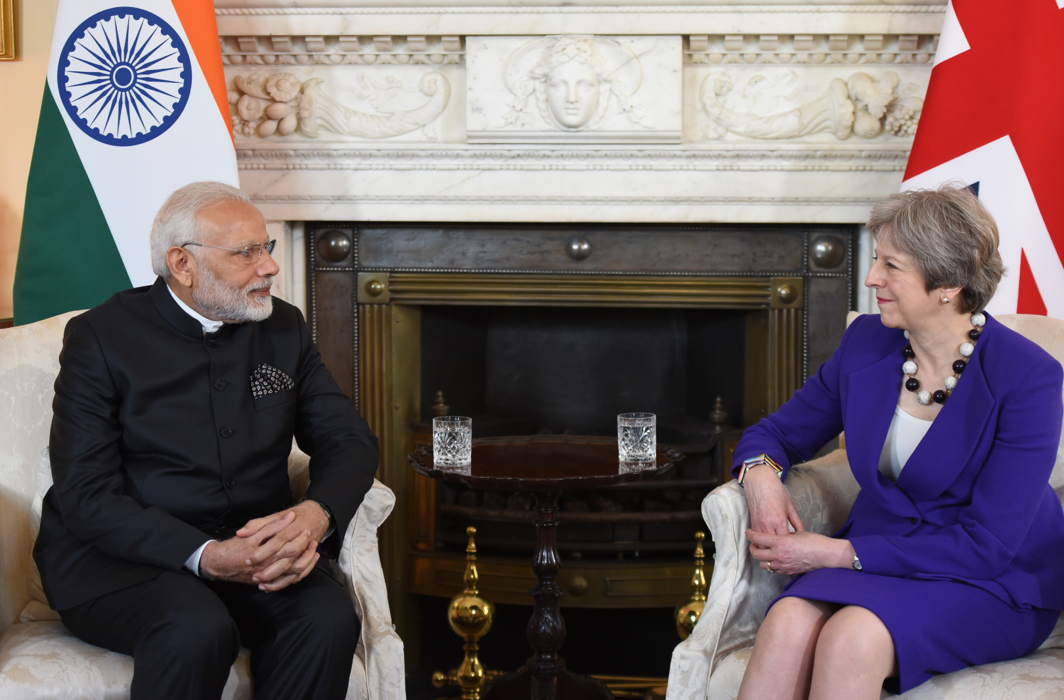 Modi held a breakfast meeting on Wednesday with Theresa May who greeted him with customary handshake saying “Very welcome to London, Prime Minister”.

Meanwhile, Raveesh Kumar, spokesperson of Ministry of External Affairs, who is travelling with the PM, told Indian journalists that the two leaders had wide-ranging talks on redefining and infusing new energy into the bilateral engagement post-Brexit.

A statement issued by the office of British PM after the meeting said that the Syria air strikes, counter-terrorism, radicalisation and online extremism were among some of the key topics covered by both leaders.

A Downing Street spokesperson said, “Prime Minister Modi said there would be no dilution in the importance of the UK to India post-Brexit. He said the City of London was of great importance to India for accessing the global markets and would remain so.”

“The Prime Minister (May) updated Prime Minister Narendra Modi on the progress of the UK’s withdrawal from the EU, saying the implementation period agreed in March gives Indian companies and investors the confidence that market access will continue on current terms until the end of 2020,” the spokesperson said.

British PM reiterated the UK’s position on Russia’s recent “destabilising behaviour”, underlined by the attack in Salisbury on former Russian double agent Sergei Skripal and his daughter Yulia and the protection provided for the Syrian regime’s repeated use of chemical weapons against its people.

“They reflected on the progress made on bilateral defence and security cooperation since the Prime Minister’s visit to India in 2016 and the agreement to a number of Defence Capability Partnerships in key strategic areas, with closer military-to-military ties underpinned by a succession of high level visits and exchanges,” Downing Street said.

However, the joint statement described the Salisbury incident as an “appalling nerve agent attack” without mentioning Russia anywhere. India reiterated its stated position that it “oppose(s) the use of chemical weapons anywhere, at any time, by anybody, under any circumstances”. This was articulated by Indian envoy to the Organisation for the Prohibition of Chemical Weapons on April 4.

Prime Minister gave a shocker to Indian Diaspora at Central Hall in the Westminster, while responding to a question as to “What is the secret of your stamina” he said, “There are many ways of answering the question.” He further explained,    “Pichle kareeb kareeb 20 saal se main daily 1kg-2kg gaaliyan khaata hun” (For the last nearly 20 years, I have been on a diet of 1kg-2kg abuses daily).

The audience was shell shocked with the response. For some, it was part of his strategy for connecting with audience, not only out of the country but with the people back home. He took questions from the audience at the venue and from around the world sourced through social media.

His speech was much different than Madison Square Garden in New York in 2014 and the Wembley Stadium in London in 2015, mindful of the fact that four years have passed and he has only an year left before seeking a return mandate in 2019. He described the jobs he has done in the past four years.

At one point while describing the people’s expectations from his government, Modi said, “In any home, parents love all their children equally but when there’s a job to be done they give responsibility to the one who works hard and delivers, knowing that the job will get done, don’t you agree?”.

He further said, “people have apeksha (expectation) because there is bharosa (faith). I am happy people expect more from us. They do so because they trust me to take India forward… They are no longer happy with incremental change.”

Before reaching London, PM Modi visited Stockholm, Sweden where he held bilateral meetings and participated in the Nordic Summit, where leaders from Denmark, Finland, Iceland, Sweden and Norway gathered.

In London, apart from his meetings with PM Theresa May and attending the grand meeting with Diaspora, he is attending CHOGM summit in the British capital. On his return he will have brief stopover in Berlin, Germany.