The result has the potential to end Tim Paine's reign as Australia captain having lost back-to-back home series against India. 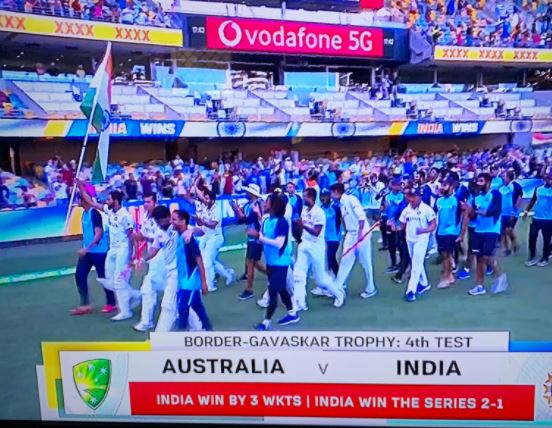 In the absence of Virat Kohli and their first-choice bowling as well as batting lineup, India chased down 328 losing seven wickets in the fourth innings of the fourth Test against Australia and claimed the Border-Gavaskar Trophy by winning the series 2-1. Despite being battered and bruised by injury concerns, India has pulled off a spectacular result, which will be remembered as one of their greatest result in Test cricket history.

With this historic win, India won their first-ever Test series on Australian soil. Moreover, for the first time in more than three decades, Australia has beaten at the Gabba.

India got off to a poor start, losing opener Rohit Sharma in the early stages of Day 5. Shubman Gill scoring 91 stitched a strong partnership with Pujara, bringing India back into the game. Stand-in captain Ajinkya Rahane played a quick knock of 24 runs off 22 deliveries, before getting dismissed by Pat Cummins. Rahane’s wicket was followed by Pujara’s dismissal scored a valiant half-century.

Rishabh Pant was promoted to Number 5 as India looked to go for the win in the afternoon session. At Tea, India were 183/3, needed 146 to win in the final session. Pant took charge towards a historic win in the last hour of the Test. Australia had not lost a Test at the Gabba in 32 years before this.

With the win, India also continued their unbeaten run in Australia for 6 years. The series will be remembered for ages and the impact that Ajinkya Rahane’s team had on the cricketing fraternity and the fans in general will be written in golden words when a fresh history of Test cricket after 2000 is written.

The result has the potential to end Tim Paine’s reign as Australia captain having lost back-to-back home series against India.