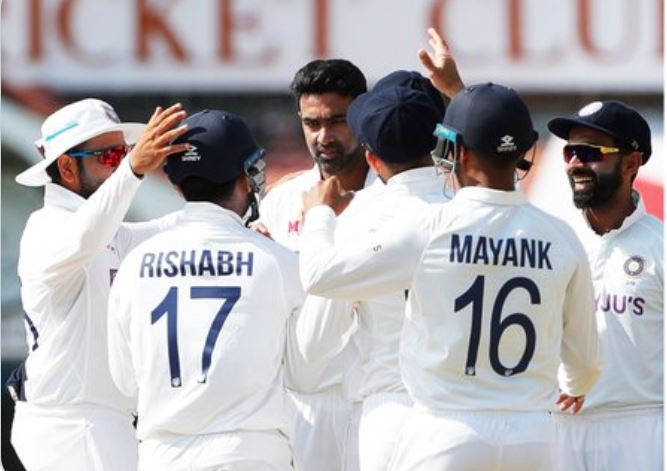 India thrashed England by 317 runs on Day 4 of the second Test match on Tuesday at the MA Chidambaram Stadium in Chennai. With this win, India levelled the four-match series by 1-1 after losing the first Test match in the same venue by a massive 227-run margin.

Ravichandran Ashwin, who hit the century and dismissed eight wickets, was the hero of the match.

Defending a big total of 482 runs, India bundled out England for 164 in their second innings with more than four sessions to spare in the match. Chasing a total of 482 runs, England lost their last 7 wickets in 35.2 overs on Day 4 while India began Day 4 on a strong note dismissing quick wickets with the visiting batting order crumbling against Ravichandran Ashwin and Axar Patel.

England resumed Day 4 at 58/3, India needed 7 wickets to win the Test on a track that was aiding spinners a lot. Ashwin started the day perfectly for India, removing Dan Lawrence in his very first over. He ended Ben Stokes innings on 8 runs before Axar Patel and Kuldeep Yadav took a wicket apiece before lunch.

After the break Axar and Kuldeep (2/25) quickly picked up the remaining three wickets to wrap up the match in the 55th over. Indian spin bowling attack shone on Day 4 at Chennai and dismissed the entire England team in 55 overs. Axar with figures of 5 for 60 became the sixth Indian to take 5-wicket on Test debut for India.

The victory was crucial for India in the context of World Test Championship as they need to win the series at least with a 2-1 margin or better to make the cut for the title clash against New Zealand.

Both sides face each other again in the third Test match in Ahmedabad which will start from February 24, and the visitor will be aiming to bounce back to winning ways. Meanwhile, the home side will be hoping to take the lead in the series.