Home Special tv shows Mudda (debate show) “Is India so weak that Pakistan will decide the CM of Gujarat?” 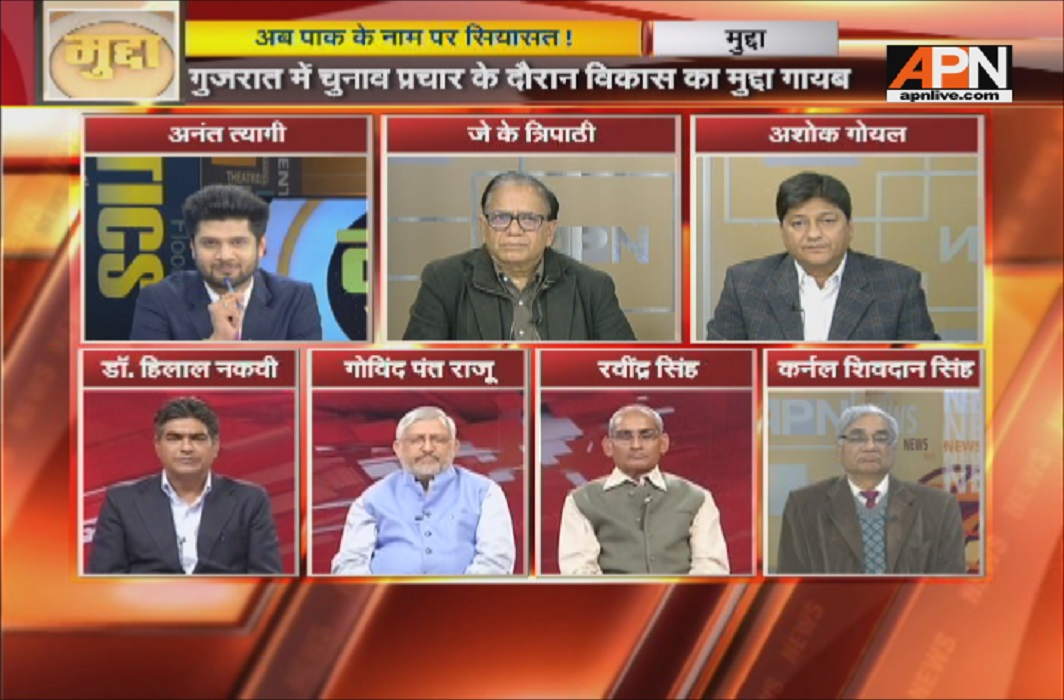 As secret meeting allegations raise the pitch of the polls, Mudda panellists feel gimmicks are overtaking real issues, with both parties going below the belt to take down one another

At an election rally in Gujarat, Prime Minister Narendra Modi, referring to unverified reports, claimed a “secret meeting” with Pakistani officials was held at Mani Shankar Aiyar’s residence and that former PM Manmohan Singh was part of the meet. Addressing voters in Palanpur, the prime minister raised questions over the alleged appeal by former director general of the Pakistan Army, Sardar Arshad Rafiq, that senior Congress leader Ahmed Patel be made chief minister of Gujarat. This entry of “Pakistan” in Gujarat polls has deepened the cracks among parties. This issue was brought up at APN’s popular debate Mudda by anchorperson Anant Tyagi. Panellists included Ashok Goyal of the BJP, Hilal Naqvi of the Congress, Ravindra Singh, political expert, Col Shivdan Singh, defence expert, JK Tripathi, former diplomat, and Govind Pant Raju, journalist.

Goyal asked why Pakistan wants to see Ahmed Patel as Gujarat CM. He said that the “meeting” held secretly at Aiyar’s home was completely unacceptable to India.

Naqvi said Aiyar is no longer in the Congress since he was removed after his “neech” remark against PM Modi; so for whatever he says or does, the Congress is not responsible any longer.

Raju said that the Gujarat elections have been witness to an extremely low level of debate among parties. He said that if the meeting at Aiyar’s home was so objectionable, how come reaction against it came five days later? He wanted to know if the intelligence had been caught napping. “How come senior Pakistani officials visit India, hold a so-called secret meeting and the intelligence is not aware of it?” he asked. He said there was nothing secret about it as visas must have been issued by the Indian government. “Is India so weak that Pakistan will decide the CM of Gujarat?” he asked.

Aiyar said that the needle of suspicion pointed at the Congress, as Aiyar was very much part of the Congress when the meeting was held.

Tripathi mentioned that Aiyar had at one point been the consul general in Pakistan, so he might have called his Pakistani friends over to his house.

Col Shivdan Singh pointed out that Pakistan and ISI will be active in their agendas, and the intelligence should not be permitting such meetings.

Naqvi said the BJP has run out of ideas to keep voter interest alive in the party, which is why it has been raking up such useless issues at poll meetings.

Goyal said that the Congress has earlier raised the Patidar issue in Gujarat, then it was the OBC issue, and now it has taken up the issue of minority appeasement.

Tripathi said that both the parties are hurling below-the-belt remarks at each other, and real issues, like those of development and price rise, are getting sidelined.

Raju said the Gujarat polls are prestigious for both the Congress and the BJP since they will directly affect the poll strategies of both the parties for the 2019 general elections.

Both Col Singh and Tripathi were of the opinion that the ISI does not want the BJP to remain in power which is why it will be behind the scenes to stoke trouble.