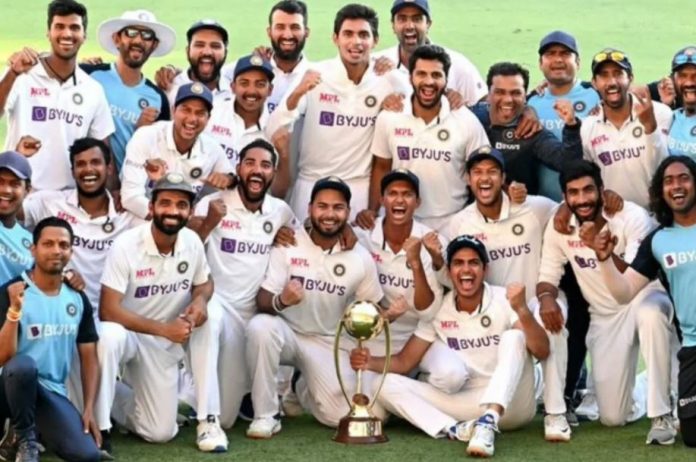 After a memorable victory at Gabba, India’s head coach Ravi Shastri on Tuesday delivered a motivational speech in the dressing room after registering victory against Australia by 2-1. Shastri praised the team spirit that the India showed to come back from the Adelaide debacle and win the series to retain the Border-Gavaskar Trophy.

During his speech, Shastri praised Shubman Gill for his fluent 91 and Cheteshwar Pujara for his 211 off 56 in India’s second innings as the ultimate warrior and also called Rishabh Pant an outstanding. Shastri also praised debutants Washington Sundar and T. Natarajan, as well as Shardul Thakur, saying that Thakur and Sundar’s 123-run partnership in India’s first essay which was broke Australia’s back.

In the absence of Virat Kohli, team India outclassed Tim Paine’s Australia in the fourth test at Brisbane after 32 years. Interestingly, the Australia had last tasted a defeat at the Gabba in 1988 when the Viv Richards-starrer West Indies thrashed Australia by nine wickets. As Team India capped off a historic win, let’s take a look at the top performers from the Border-Gavaskar Trophy.

The rising young talent Shubman Gill successfully played the role of stand-in opener making his Test debut against Australia. At the age of 21, Gill became the youngest visiting batsman on Australian soil and finished the series as the fourth-highest Indian scorer with 259 runs in the three Tests, including two half-centuries at an average of 51.80.

Indian pacer Mohammed Siraj had revealed the news about his national selection to his late father. At a time when Siraj was keen on making his debut for India in Australia, he lost his father back home but the pacer has decided to stay in Australia during these testing times and the rest became history. The Indian pacer not only made his debut but finished as the leading wicket-taker of the series for India also led the pace attack from the front and ended up with a maiden five-wicket haul in the Gabba test.

Test specialist Cheteshwar Pujara has become the new wall for team India in the modern era Just like Rahul Dravid. In the fourth test, Pujara’s wicket was became a jackpot for the potent bowling unit of the mighty Aussies. Pujara’s batting vigils opened various avenues for his colleagues to counterattack the Australian bowlers. Pujara copped several blows to the body for his 211 off 56 in India’s second innings as the ultimate warrior. With scoring 271 runs, Pujara was the 2nd highest scorer in the series.

Wicket keeper batsman Rishabh Pant turned out to be one of the most consistent performers for team India in this series. For Pant, this series unlocked a new level of his batting where he remained keen on playing fearless not careless cricket. Earlier, Pant was constantly facing criticism for careless cricketing technique.

In an important clash, Rahane, scoring a match-winning knock of 97 guided Rahane’s men to a stunning win at the Sydney Cricket Ground. In the series decider, Pant scored an unbeaten 89 to make sure India finish ahead of the hosts and breach their fortress with great panache.

Leading team India’s spin bowling attack, Ravichandran Ashwin bagged 12 wickets despite not playing the series decider at Gabba. As a middle-order batsman, Ashwin played the innings of his life in the whites for India at the Sydney Cricket Ground. The partnership of Ashwin and Hanuma Vihari during third test laid the foundation of India’s series win.

Despite of these rising stars, the debutants Washington Sundar, T. Natarajan and Shardul Thakur were among those who performed beyond the selector’s expectations in the series. Thakur has been really impressive and had finished his spell with figures of 3/94 and then played an outstanding knock of 67 runs which make the fourth test alive. The duo of Sundar and Thakur added 123 runs for the seventh-wicket stand after 186/6. Their impactful partnership in the middle-order helped India post 336 in reply to Australia’s first innings total of 369.