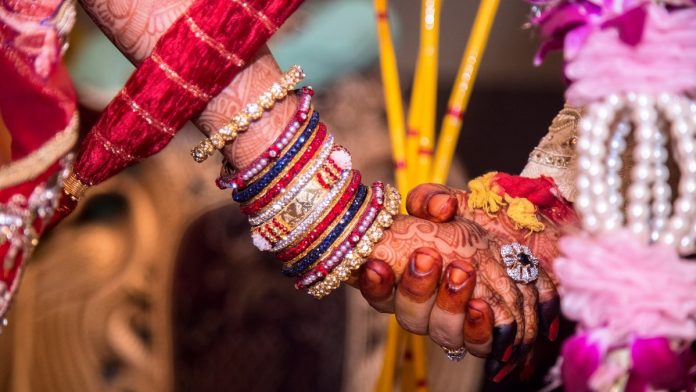 Uttar Pradesh Police on Wednesday stopped a wedding ceremony between a Hindu woman and Muslim man, a week after Uttar Pradesh Governor Anandiben Patel approved the ordinance against unlawful conversion. The wedding was scheduled to take place in city’s Para area. However, the police reached the venue right before the start of ceremonies and took both the parties to the police station where they were asked to seek clearance for marriage from District Magistrate of Lucknow.

Speaking to media, senior police officer Suresh Chandra Rawat said the police reached the venue of the wedding after receiving information that a woman from one community was getting married to a man from another community. He said both the parties were called to police station where police handed them a copy of the new ordinance and asked them to seek approval from the DM. He added that both the parties have give written consent that they will move ahead with things only after DM’s permission.

According to reports, the wedding was taking place with the consent of both the families and neither side had any plan to convert for the purpose of marriage. the reports further stated that the families plan to go ahead with the wedding after completion of all formalities.

Last week, an FIR was launched against a man in Bareilly for forcibly trying to convert a woman to Islam for the purpose of marriage. This was the first case registered against love jihad in the country and it came just a day after Uttar Pradesh Governor Anandiben Patel approved the ordinance against the practice.

According to the ordinance, a marriage will be declared null and void if a woman converts solely for the purpose of marriage. The maximum punishment for violators can be a jail term of up to 10 years. Under the new law, those who are willing to change their religion will have to apply to the district magistrate two months ahead.

India and Pakistan militaries have strictly agreed to observe a ceasefire along the Line of Control in Jammu and Kashmir and other agreements, according to a joint statement on Thursday.
Read more
Load more