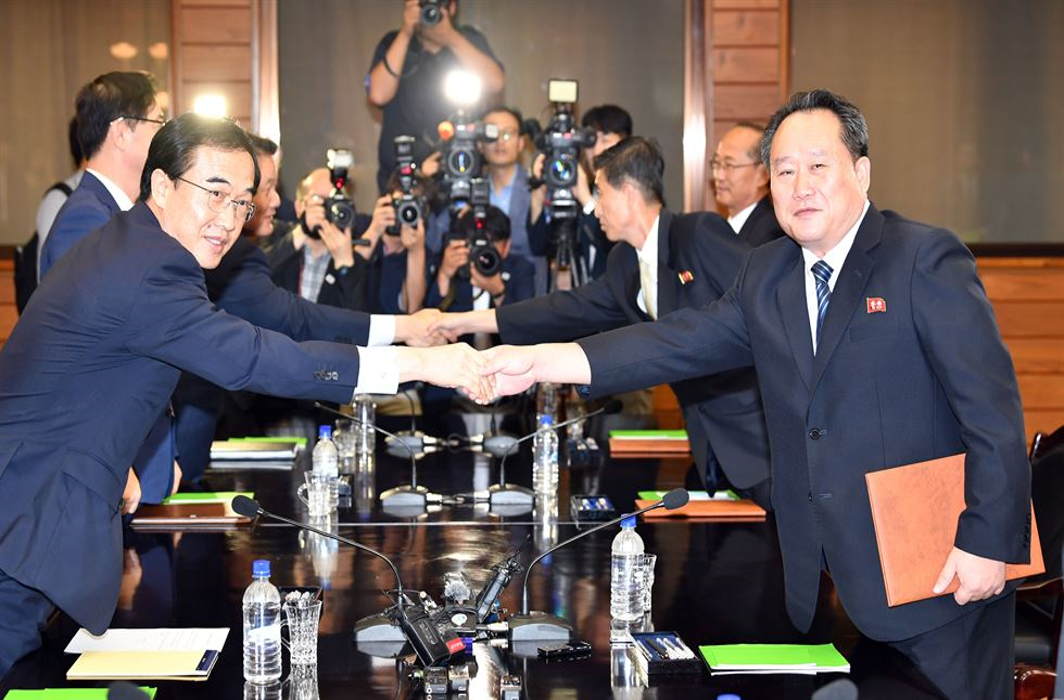 In a major development North and South Korean officials have agreed for third summit between their leaders Kim Jong-un and Moon Jae-in, to be held in North Korean capital Pyongyang in September. Representatives of the two countries said in a joint press statement Monday.

According to the statement issued at the end of the meeting “South Korea and North Korea agreed to hold the summit in September in Pyongyang.” The exact date for the summit was not announced.

The agreement was made during a ministerial-level meeting at the request of North Korea held on the North’s side of Panmunjeom within the Demilitarized Zone (DMZ) held on Monday morning.

The talks were led by South Korea’s unification minister Cho Myoung-gyon and North Korea’s Ri Son-gwon, the chairman of the committee for the peaceful reunification of the country.

“During the meeting, the two Koreas discussed issues that need to be actively dealt with. They also talked on how to implement follow-up measures to the Panmunjeom Declaration,” said the statement.

“Further specifics relating to the upcoming summit in Pyongyang will be discussed at working-level meetings. Seoul asked Pyongyang to speed up its nuclear disarmament talks, which have seen little progress, since the Washington-Pyongyang summit in Singapore. Regarding the request, the North said the country was pushing forward with steps agreed to by the United States,” Cho said.

Meanwhile, North Korea’s Chairman of committee for the peaceful reunification Ri Son-gwon said that two Koreas also agreed to quickly finish establishing a liaison office in the Gaeseong Industrial Complex; and that the South would provide supplies and materials to modernize the North’s railway infrastructure.

Two Koreas have agreed for a summit amidst growing doubts over Pyongyang’s “sincere intention” toward denuclearization that North Korean leader Kim Jong-un and President Donald Trump agreed to at their June 12 summit in Singapore.

The “complete” denuclearization of the Korean Peninsula was reportedly agreed to in exchange for security guarantees from Washington. At earlier inter-Korean summit in April, Seoul and Pyongyang also agreed on denuclearization.

After North Korea-US summit held in June in Singapore this year, Pyongyang has destroyed a nuclear test facility, begun dismantling missile test sites and returned the remains of U.S. troops killed during the 1950-1953 Korean War as concessions to the United States.

North Korea now wants reciprocity from US administration such as a partial lifting of economic sanctions.

The US has not responded to the North Korean gestures. However, U.S. State Department spokeswoman Heather Nauert said it has communication with North Korea both by phone and text after Secretary of State Mike Pompeo and White House National Security Advisor John Bolton expressed “uneasiness” with the lack of progress on denuclearization.

Recently North Korean Foreign Minister Ri Yong-ho criticized the US for maintaining economic sanctions and not responding to the North’s request to officially declare an end to the Korean War.

A South Korean official has reportedly said, “The third summit is aimed at maintaining momentum on various fronts based on mutual trust. Talks must focus on narrowing differences between all interested parties to establish a permanent peace.”

The ministerial meeting lasted for 71 minutes after starting at 10:00 a.m. Expectations were high that it would be successful as South Korea’s Ri made “goodwill gestures” to North’s Cho.

“I realize that now is an era in which we hold hands to go forward together,” Ri said in his opening remarks, according to pool reports.