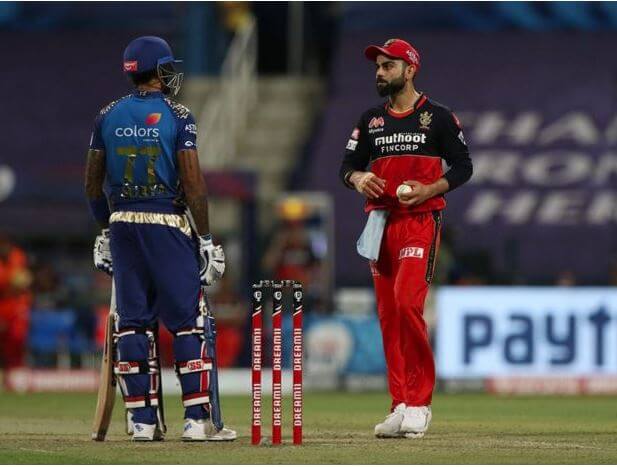 A classy half-century of Suryakumar Yadav (73 not out, 43 balls) helped Mumbai Indians to secure a five-wicket win over Royal Challengers Bangalore in Abu Dhabi on Wednesday. With this win, the defending champion Mumbai Indians became the first team to reach the playoffs. Mumbai Indians with 16 points from 12 matches has sealed the playoff berth.

The encounter between table-toppers Mumbai Indians and Royal Challengers Bangalore had everything from Devdutt Padikal’s knock to Suryakumar Yadav’s 360 hittings, and Jasprit Bumrah’s masterclass. RCB’s debut opener Devdutt Padikkal smashed 74 off 45 against Mumbai’s full-fledged bowling unit. With this half-century, Padikkal added 400 runs in his debut season for their team and is all set to end the tournament as the emerging player of the year. Padikkal’s knock took RCB to 129 for 2 in 15 overs. However, RCB reached a good total of 164.

Chasing RCB’s challenging total of 165, the defending champions lost their in-form opener Quinton de Kock early in their chase. Ishan Kishan and Saurav Tiwary also proved to be ineffective in the game but Surykumar Yadav led the inning with Krunal Pandya as he did on many occasions. With Yadav’s not out 73 in just 43 balls Mumbai Indians leads to the victory in 19.1 overs.

Yadav was showing 360 degree shorts with a touch of sheer class in their inning of 76 runs. Yadav has scored 362 runs at a strike rate of 155 In 12 matches while he has scored 424 runs in 16 games during Mumbai’s title-winning campaign. His first-class average is 44. Despite having such records, Yadav hasn’t played for India in any format.

On Monday, when the Sunil Joshi-led national selection committee announced the Indian squads for the upcoming Australia tour, they did not consider him for team India.

With the win, Mumbai Indians become the first team to make the playoffs. RCB and Delhi Capitals need a win to register in the top four as Kolkata and Punjab are engaged in a tough fight for a top-four finish.