Test specialist Cheteshwar Pujara pick by CSK surprises many on his base price of Rs 50 lakh. 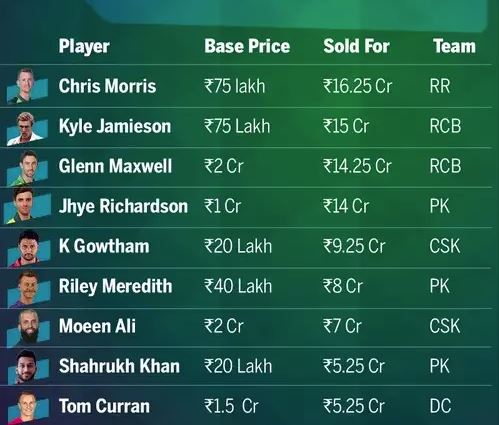 While Morris became the most expensive player ever in the history of IPL, Krishnappa Gowtham became the highest uncapped Indian buy at the auction table.

Morris came in to the auction at a base price of Rs. 75 lakh. The most expensive overseas buy before Morris was Pat Cummins, who was bought by Kolkata Knight Riders ahead of IPL 2020 for Rs. 15.5 crore.

Morris, a right-arm fast bowler and a lower-order hitter, has played 70 IPL matches and scored 551 runs and also dismissed 80 wickets. In 2012, Morris has made his international debut for South Africa in a T20I against New Zealand. Since then he has played only 23 T20Is and has scored 133 runs and dismissed 34 wickets. However, Morris hasn’t played any international cricket since 2019.

Test specialist Cheteshwar Pujara was bought by Chennai Super Kings on his base price of Rs 50 lakh. Another uncapped player Shahrukh Khan, who had a scintillating Syed Mushtaq Ali trophy campaign also grabbed big bucks and was bought by Punjab for Rs 5.25 crore. New Zealand all-rounder Kyle Jamieson, who had listed his base price as Rs. 75 lakh, was bagged by RCB for Rs 15 crore.