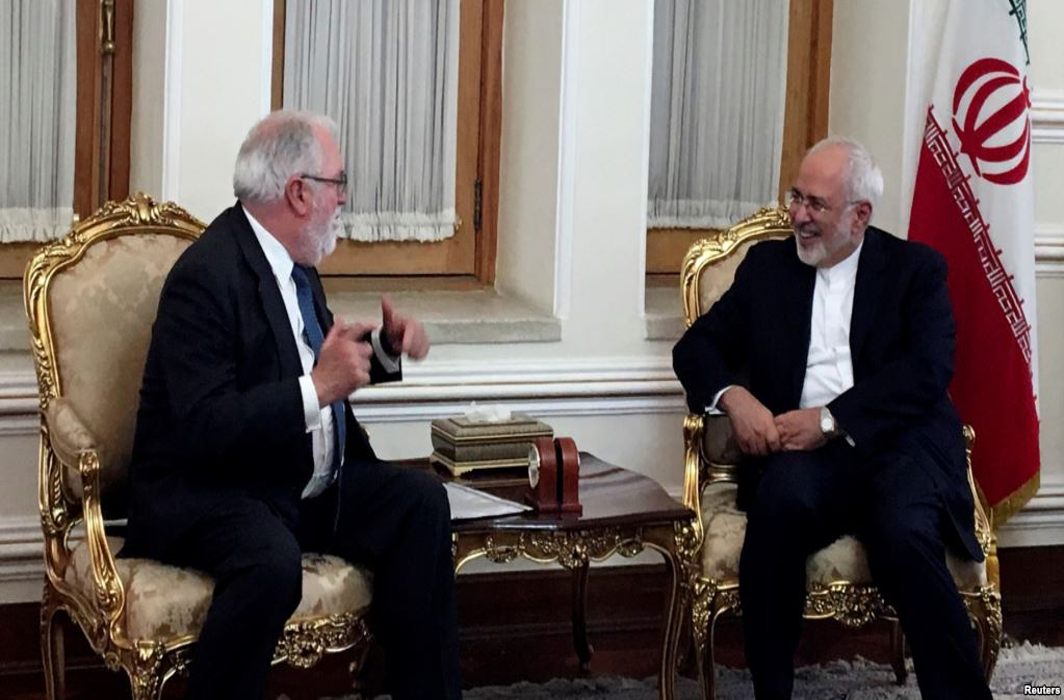 The damage control exercise after US President Donald Trump’s withdrawal from Iran nuclear deal known as JCPOA seems to be moving on a slow pace where Iranian officials have been complaining that EU has to take practical steps to boost economic cooperation with Tehran instead of extending just political support.

Iranian Foreign Minister Mohammad Javad Zarif has reportedly made such remarks while meeting European Commissioner for Energy and Climate Miguel Arias Cañete and his accompanying delegation in Tehran on Sunday, a few weeks after US President Donald Trump announced his decision to withdraw from the landmark deal.

Iran’s foreign minister Javad Zarif has recently visited Beijing, Moscow and Brussels to interact with the other signatories of the landmark 2015 Iran nuclear deal.

Zarif said that the European Union’s “political support” for the nuclear deal was not enough and  urged to take more practical steps to boost economic cooperation with Iran.

Zarif said, “With the US exiting the JCPOA, public opinion’s expectations from the European Union have increased to save the JCPOA’s achievements. The [European] Union must take more practical steps to continue its economic cooperation with Iran and boost its investment in Iran.”

He emphasized that the 28-nation’s commitment to implementing the nuclear accord was not consistent with the announcement of the possible withdrawal by major European companies from cooperating with Iran.

Arias Cañete, for his part, said European countries had reinforced their determination to maintain the JCPOA’s gains. He further said that the EU was resolute on implementing the nuclear deal and helping European firms continue their cooperation with Iran.

Kochi, who heads the parliamentary reconstruction committee, said that the session was attended by Parliament Speaker, Supreme National Security Council Secretary and Chief negotiator. He said that “Zarif confirmed in a closed session that this “Deal is in the intensive care and going through a very tough situation.”

Meanwhile, Ali Akbar Velayati, a senior adviser to the Supreme Leader Ayatollah Syed Ali Khamenei, has said that he was highly skeptical about Europe’s support for the nuclear deal with Iran. He said that he does not trust their current manner of dealing with it.

He has reportedly said, “Some members of the European Union say they are committed [to the deal]. Some also say that they are developing economic relations [with Iran]. Meanwhile, some European officials have stated that they cannot offer guarantees in the face of US sanctions.”

Velayati, who served as foreign minister for a very long time after Islamic revolution, expressed his hope that the Iranian officials will be able to gain the necessary guarantees in the negotiations with Europeans.

Abbas Araqchi, the Deputy Foreign Affairs Minister for Political Affairs, who is also one of the senior Iranian nuclear negotiators, has also expressed his doubt that the European parties would remain in the deal without the US. He further elaborated saying that Europeans do not want to enter a political and commercial war with the US.

The US president announced on May 8 that Washington was walking away from the nuclear agreement, which was reached between Iran and the P5+1, the five permanent members of the UN Security Council and Germany in 2015. He has also made his intention clear to reinstate US nuclear sanctions on Iran and impose “the highest level” of economic sanctions against Iran.

Immediately after the US withdrawal from the nuclear deal, Iran has said it would remain in the JCPOA for now, pending negotiations with the other signatories before making a final decision on its future role in the agreement. Tehran wants the Europeans to give it clear-cut guarantees about fulfilling their obligations.

The three European signatories, including Britain, France and Germany, have expressed their determination to preserve the deal.  However, Trump’s administration said last week that the US president is prepared to impose sanctions on European companies that do business in Iran.

John Bolton, Trump’s national security adviser, claimed that “the Europeans will see that it’s in their interests to come along with us” rather than continue with Iran nuclear deal, under which major European corporations have signed billions of dollars of contracts with Iran.