Home Latest world news Iran to US: Who are you to decide for Iran and the... 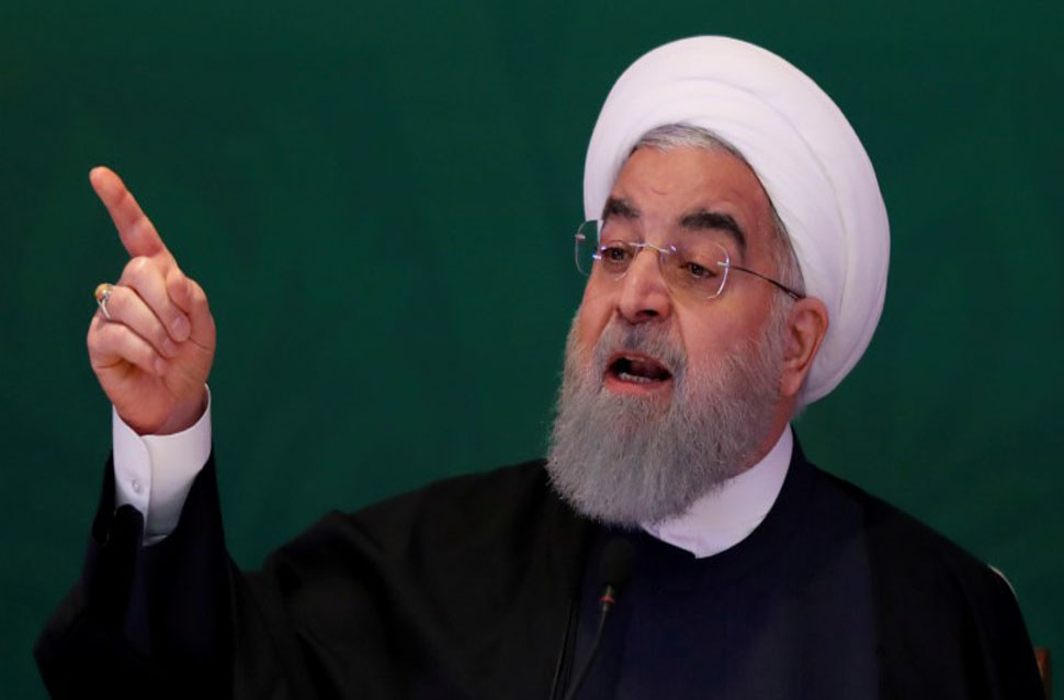 Reacting to US threat of the “strongest sanctions in history” Iranian President Hassan Rouhani has said that Washington cannot make decisions for Iran and other independent countries asking straight “Who are you to decide for Iran and the world?”

The US Secretary of State Mike Pompeo, who earlier headed CIA, while delivering his first policy speech in Washington on Monday outlined a list of 12 “basic requirements” for a new treaty, including that “Iran must stop enrichment of uranium and never pre-process plutonium, as well all “unqualified access to all [nuclear] sites throughout the country”.

Pompeo said, US “will apply unprecedented financial pressure on the Iranian regime. The sting of sanctions will be painful if the regime does not change its course from the unacceptable and unproductive path it has chosen to one that rejoins the League of Nations.”

While referring to Iran’s growing influence in the region, Pompeo said Iran would have to end its interventions in regional affairs and conflicts, including in Lebanon and Yemen.  “We will track down Iranian operatives and their Hezbollah proxies operating around the world and crush them” he added.

Iranian President said on Monday, “All world countries want independence in their decisions and perhaps Americans are able to advance their agenda in some places through pressure, but logic does not accept them making decisions for the world.”

He further said, “Today, we must help each other more” because the current US administration has regressed to 15 years ago and is repeating the same remarks made by former US president, George W. Bush, in 2003, he added.

Rouhani emphasized that it is “not acceptable at all” that a man who worked at an espionage service for many years is now making decisions for Iran and other countries after assuming the position of US secretary of state. “Who are you to decide for Iran and the world?” he asked.

On May 8, US President Donald Trump announced that Washington was withdrawing  from Iran nuclear deal reached between Iran and the five permanent members of the UN Security Council – the US, Britain, France, Russia and China – plus Germany in 2015.

Trump had also announced that he would reinstate US nuclear sanctions and impose “the highest level” of economic bans on Iran.

However, Iran has said it would remain in the JCPOA for now, pending negotiations with the other signatories, before making a final decision on its future role in the agreement.

Iranian foreign minister Javad Zarif has recently travelled to Beijing, Moscow and Brussels for interacting with China, Russia and three major European countries including Britain, France and Germany. He has also held discussions with European Union officials wanting clear-cut guarantees about fulfilling their obligations if it remains in the accord.

Meanwhile, British foreign secretary Boris Johnson, while talking at the sidelines of G20 foreign ministers meeting in Argentine capital Buenos Aires on Monday, has questioned the practicality of the tough conditions set by the US for a new “jumbo” Iran deal after Trump administration’s withdrawal from the deal.

Johnson referred to allegations suggesting that they could not be incorporated into one single agreement. He said, “The prospect of a new jumbo Iran treaty is going to be very, very difficult.”

Johnson said, “I think if you try now to fold all those issues – the ballistic missiles, Iran’s misbehavior, Iran’s disruptive activity in the region and the nuclear question — if you try to fold all those in to a giant negotiation, a new jumbo Iran negotiation, a new treaty — that’s what seems to be envisaged — I don’t see that being very easy to achieve, in anything like a reasonable timetable.”

Moreover, EU’s foreign policy chief Federica Mogherini has stressed that there is no “alternative” to the Iran nuclear deal, after Pompeo vowed “painful” sanctions against Iran.

In a statement issued on Monday Mogherini said, “Secretary Pompeo’s speech has not demonstrated how walking away from the JCPOA (nuclear deal) has made or will make the region safer from the threat of nuclear proliferation or how it puts us in a better position to influence Iran’s conduct in areas outside the scope of JCPOA.”