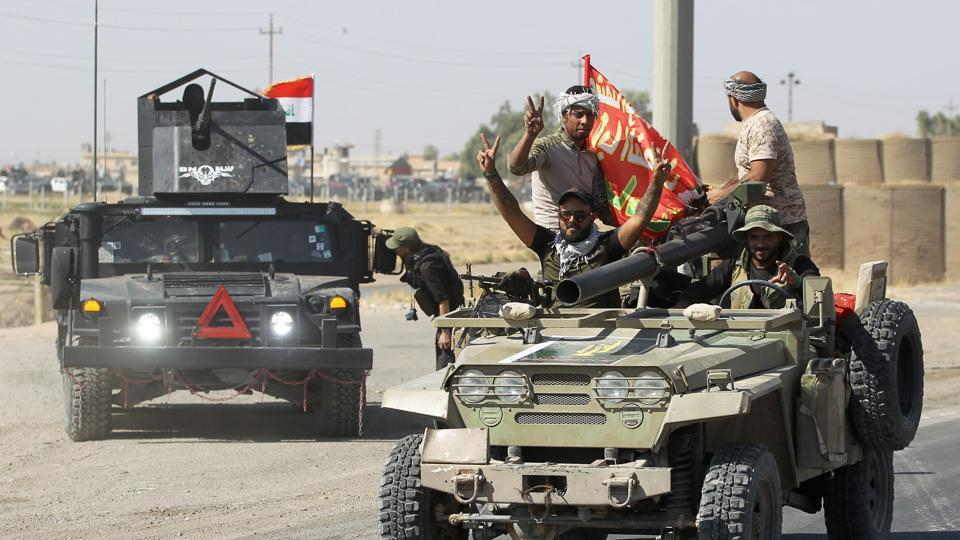 In a smooth but important development in the post Saddam era, Iraqi forces have, on Saturday, claimed full control of  oil rich Kirkuk province after intense fighting against Kurdish Peshmarga, the forces of Kurdistan Regional Government (KRG) in northern Iraq.

According to Doha based Aljazeera TV network, the Araqi army and the mobilization forces captured the last town Altun Kupri, near Erbil, the headquarters of KRG on Saturday.

The Kurds took up new positions three days after they were pulled out of Kirkuk in the aftermath of a dramatic push by Iraqi army.  More than 100,0000 people have fled to the KRG areas since the operation began.

Iraq’s Prime Minister Haider al-Abadi had ordered army not to enter Erbil’s city limits, saying they will protect civilians and their property respecting the 2003 perimeters of the disputed area.

Meanwhile, Nazm Hrki, Kurd Peshmarga Commander of their 10th Division, complaint against Iraqi government saying, “In reality, when we used to fight ISIL everyone praised the Peshmerga – ‘they are brave they are fighting for the world’. But now they are attacking us. As I see it, everyone is turning their backs on us.”

During 1991 to 2003, (in the post Kuwait invasion) Kurdistan was functioning independent of Baghdad and was supported by oil revenues under UN monitored oil for food plan.  The Americans groomed the region against Saddam regime and helped build infrastructure to enable them to rule their “region” as and when required. During that period Kurdistan had circulated its own currency, attracting more dollars than the currency issued by Baghdad government.

Since 2014, Iraqi forces, along with the mobilization forces dominated by Shias, and Kurd Peshmarga were fighting against Daesh (IS) terrorists shoulder to shoulder. But the independence referendum in the KRG region including oil rich Kirkuk last month, had created severe rift between Baghdad government and Erbil based KRG headed by Masoud Barzani.

The referendum was seen as the final straw for the Iraqi government and neighboring countries that oppose Kurdish independence. Iraqi government had asked all nations to stop international flights operations to the KRG controlled region. Iran and Turkey had threatened to stop all supplies trough land borders while Syria had also expressed its displeasure.

Meahwhile, Tehran based Press TV has reported that Israeli PM Benjamin Netanyahu is lobbying world powers to support the independence of the semi-autonomous Kurdistan region from the rest of the Iraqi territory. This was disclosed by an unnamed source saying Netanyahu raised the Kurdish plans for independence with German Chancellor Angela Markel last week and the Russian President Vladimir Putin on Wednesday.

The Israeli official, who declined to be named, stated that the Tel Aviv regime has security interests in Kurdistan. He was quoted saying as, “This (territory) is a foothold. It’s a strategic place. It would be best if someone gave them weaponry, and whatever else, which we cannot give, obviously.”

Recently Reuters had reported that “Israel has maintained discreet military, intelligence and business ties with the Kurds since the 1960s, viewing the minority ethnic group — whose indigenous population is split between Iraq, Turkey, Syria and Iran — as a buffer against shared Arab adversaries.”

In another development, the foreign minister of Kurdistan Regional Government (KRG) Falah Mustafa had on Thursday said that they have never intended to engage in a confrontation with the Iraqi military.

In an interview with CNN he underlined the need for dialogue between the KRG and Iraqi government in an attempt to achieve a common goal.

Meanwhile KRG has postponed the proposed elections for President and Parliament in their region. They had earlier plans to follow the steps towards complete independence. These elections were supposed to be pressure tactic against Baghdad government.