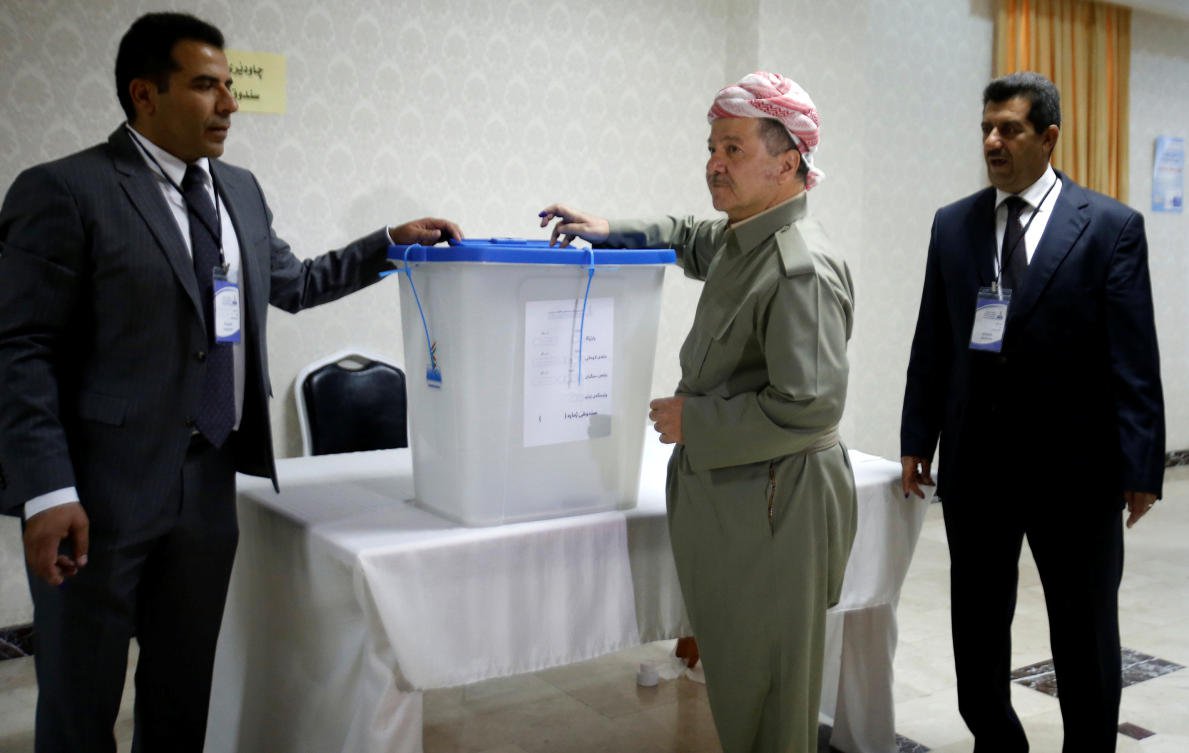 Exerting pressure on Iraqi Kurds for not insisting for a separate country, Turkish President Recep Tayyip Erdogan has, on Tuesday, warned Kurdistan Regional Government (KRG) President Masoud Barzani that pushing for independence risked sparking an “ethnic war” in the region.

President Erdogan, while speaking in a televised address on Monday night, said, “If Barzani and the Kurdish Regional Government do not go back on this mistake as soon as possible, they will go down in history with the shame of having dragged the region into an ethnic and sectarian war.”

He has also threatened to seal borders with Iraqi Kurdistan and stop oil sale through its territory.

Meanwhile, Aljazeera reports that Iraqi army has joined with Turkish forces to conduct joint military drills on the two nations’ shared border. Earlier Baghdad had called KRG for handing over all the international border posts.

The Iraqi soldiers arrived in Turkey late on Monday, the day when Iraqi Kurds voted for independence referendum, ahead of exercises the two armies carried out on Tuesday in Habur border crossing.

Masoud Barzani, President of KRG, said on Sunday, that he would seek talks with Baghdad on how to implement the outcome of the poll. “If we have a constructive dialogue, then we can give it even more time, in order to secure better relations between Kurds and Baghdad.

However, Iraq’s Prime Minister Haider al-Abadi, on Monday night, said that his government will not talk with the Kurdistan Regional Government (KRG) about the results of the Monday’s “unconstitutional” referendum on independence.

He said that “Most of the problems of the (Kurdish) region are internal ones, not and not with Baghdad, and will be increased with the calls for separation.” He further said, “The economic and financial problems the region is suffering from are the result of corruption and misadministration.”

Meanwhile, Iran’s parliament speaker Ali Larijani has expressed regret on Tuesday that the plebiscite had been held even as the Daesh (IS) terrorist campaign had yet to be fully taken care of in Iraq.

Larijani referred to the formation of terrorist groups in Iraq and said certain countries had come to assist those groups in order to deprive the Iraqi people of their right to determine their own fate. Iran has been alleging US, Israel, Saudi Arabia and other regional allies for supporting various terrorist groups in the region.

On Sunday, Iran had discontinued air-link with Iraqi Kurdistan and denied use of its air space by any aircraft taking off from the territory. Earlier Tehran had threatened to stop all trading through the border crossings connecting Kurdistan Regional Government (KRG) controlled territory.

Meanwhile, The US Department of State, in a statement issued on Monday, said that it was “deeply disappointed” by the Iraqi Kurdistan’s “unilateral” independence referendum saying that it would increase “hardships” for people in the region.

However, Israel is the only country in the region supporting referendum in Iraqi Kurdistan. Israeli Prime Minister Benjamin Netenyahu’s office sent remarks to the foreign correspondents based in Jerusalem on September 13 saying, “(Israel) supports the legitimate efforts of the Kurdish people to achieve their own state.”

Reuters reports, “Israel has maintained discreet military, intelligence and business ties with the Kurds since the 1960s, viewing the minority ethnic group — whose indigenous population is split between Iraq, Turkey, Syria and Iran — as a buffer against shared Arab adversaries.”