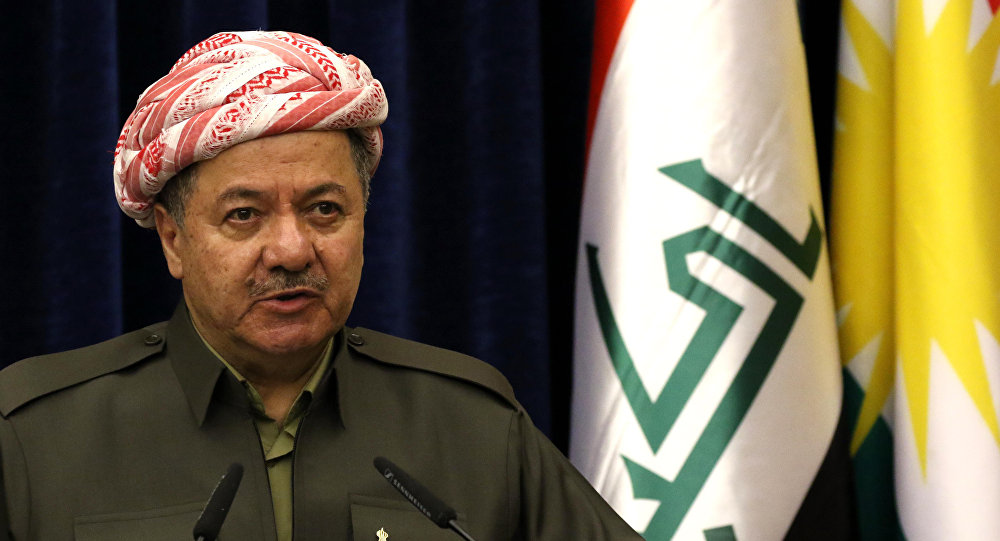 Iraq, Iran, Turkey and Syria are against separate Kurdish state

In a major development after the overthrow of Saddam Hussein regime in Iraq in 2003, semi-autonomous Kurdistan region in the country is holding an independence referendum, on Monday, against strong objections from central government in Baghdad and in defiance of urgent calls from international community to scrap the exercise.

According to reports from various sources, Erbil, the capital of the present semi-autonomous region, witnessed lots of enthusiasm among the residents. Kurdish leader Masoud Barzani voted in a polling station near the city. Polling was in progress in Erbil, Sulaimaniyah and Dahok provinces. Votes were also polled in disputed bordering zones such as the oil-rich province of Kirkuk. Initial results are expected in 24 hours. Polling began at 8 a.m. and will continue for 12 hours.

Earlier President of the Kurdistan Region Masoud Barzani  had urged “all Kurds” to go to the polls, saying “his people’s partnership with the central government in Baghdad had failed.”

Iraq’s Prime Minister Haider al-Abadi, on Sunday, said that Baghdad will not allow the creation of an “ethnic government” in the country. In a televised speech, Abadi said “Taking a unilateral decision, which can affect the unity of Iraq and its security and the security of the region, through a referendum on separation, is unconstitutional and against civil peace. We will take the necessary measures to preserve the unity of the country.”

In a fast moving development, Iran, considered to be the best friend of Iraq in the region, closed its airspace to all flights to and from the semi autonomous Kurdish region in Iraq at Baghdad’s request on Sunday.

Keyvan Khosravi, spokesman of Iran’s Supreme National Security Council (SNSC)  was quoted by Press TV saying, “At the request of the central government of Iraq, all flights from Iran to Sulaymaniyah and Erbil airports as well as all flights through our country’s airspace originating in the Iraqi Kurdistan Region have been halted.”

Iran has, once again, asserted its support to Iraq’s sovereignty and integrity on Monday.  President Hassan Rouhani, in a telephonic conversation with Iraqi PM Haider al-Abadi, said that Iran was against any move that would undermine Iraq’s territorial integrity and national unity.

“In this important issue concerning Iraq, we will stand by our neighbor and the Iraqi government,” Rouhani said.

Meanwhile, Turkish government, on Sunday, lined up its tanks at border crossing with Iraq’s Kurdish region, sending clear signal of their opposition to the Kurdish Regional Government’s independence referendum.

Turkish President Tayyip Recep Erdogan, while addressing UN General Assembly on Tuesday said, “New crises in the region, such as bids for independence, could spark new conflicts and must therefore be avoided at all costs … We urge Iraq’s Kurdish Regional Government to abort the steps they have taken in that direction.”

Syrian foreign minister Walid al-Moallem said on Sunday in New York that his country doesn’t recognize the Iraqi Kurdish referendum on support for independence from Baghdad, which could break up the neighbouring country. He said, “We reject any measure that leads to dividing Iraq.”

Syria, like turkey and Iran, opposes the vote in Iraqi Kurdish region fearing that Kurdish communities within Syria might eventually do the same.

Prior to the referendum in the Kurdish region, Iraq’s Supreme Court ruled in favor of suspension of the independence referendum and country’s parliament voted to reject the proposal. PM Abadi has even threatened military intervention in case the referendum leads to violence.

Despite fierce criticism from neighboring countries and US, Masoud Barzani, the president of Iraqi Kurdistan went ahead with referendum. Israeli Prime Minister Benjamin Netanyahu had recently supported creation of a separate Kurdistan state in the region. Israeli flag was also spotted during a pro-referendum rally in Erbil last week.