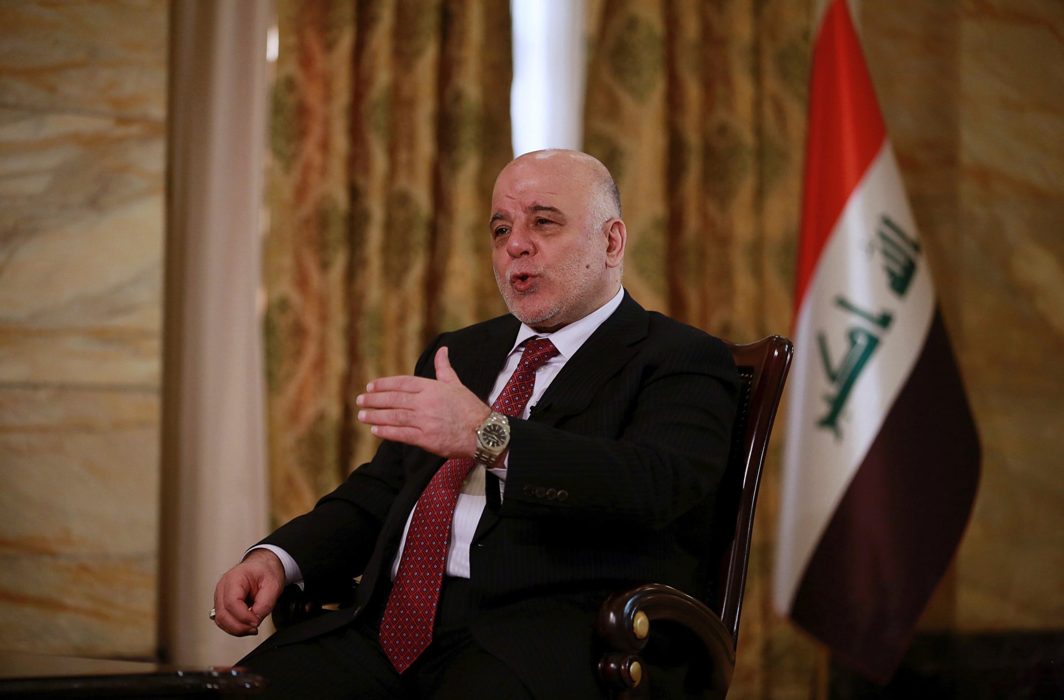 Reacting to Masoud Barzani, the head of Kurdistan Regional Government (KRG)’s defiant attitude sticking for “ending ties with Baghdad,” Iraqi Prime Minister Haider al-Abadi has, on Tuesday, threatened to impose international air embargo if he does not hand over control of its airports in Erbil and Sulaymaniyah within three days.

Iraqi Prime Minister, while addressing his weekly press conference in Baghdad, said international flights to and from the Kurdish region would be suspended in three days. Precisely, KRG has until 3:00 pm local time (12:00 GMT) on Friday to transfer control of the airports to the Iraqi government.

Abadi reiterated that Baghdad would not negotiate with Kurdish authorities about the results of the provocative and “unconstitutional” referendum saying that whole nation would suffer from its repercussions.

Iraqi prime minister alleged corruption among the Kurdish leaders saying that the revenues collected from exporting the region’s oil had been transferred to personal bank accounts abroad. He also criticized the Kurdish authorities for not paying salaries to  the employees and workers in the region despite taking some 25 percent of country’s oil revenues.

Iraq’s central government called on all countries to stop direct flights to the international airports of Erbil, the capital of KRG and Sulaymaniyah last week. However only Iran has complied with Baghdad’s suggestion by halting direct flights to the region and also closing its air space for the flights originating from or destined to the Kurdish region. Iran had also threatened to stop trading through its borders with Iraqi Kurdish region.

Meanwhile, Masoud Barzani, in a televised address on Tuesday, urged Baghdad to engage in “serious dialogue instead of threatening.”  He said, “I call on Mr. Haider al-Abadi and the others not to close the door to dialogue, because it is dialogue that will solve problems.” He further said, “We assure the international community of our willingness to engage in dialogue with Baghdad.”

He was quoted saying, “We may face hardship, but we will overcome.” Barzani urged the world powers “to respect the will of millions of people” who voted in the referendum and adding that the “Yes” vote had won in the plebiscite.

According to Kurdish authorities, the turnout in the independence referendum was 76 percent, with 3.3 million of the total 4.58 million registered voters having participated in the exercise.

Kurdish Regional Government (KRG) was groomed during 12 years of UN sanctions imposed against Saddam Hussein regime after Gulf war-one triggered after Baghdad chose to invade and occupy Kuwait in 1990. Iraqi Kurds were getting 16 percent of country’s oil revenue directly through UN agencies till 2003, the fall of Saddam regime.

The Iraqi Kurdish border with Turkey is manned by Peshmarga. Therefore Baghdad chose to participate in joint military drill with Turkish forces on the other side of the border. This is peculiar situation where official army of the central government is forced to guard its border from the territories of neighbouring country.

The independence referendum was held on Monday in open defiance of Baghdad and much to the consternation of the international community warning it could most likely create more trouble in the country engaged in fight against Daesh terrorists.

On Monday, Iraqi Defence Minister had announced that its armed forces had begun large scale military drills with Turkish army along the common border.

On Monday Turkish President Recep Tayyip Erdogan said he would seal the Turkish border with the Iraqi Kurdish region over the controversial referendum and threatened for blocking their key oil exports.

On Tuesday, Erdogan said that Ankara would consider all options, including economic sanctions and military measures and warned that Iraqi Kurds would go hungry if Turkey decided to stop flow of trucks and oil across its border with northern Iraq.

On September 18, one week before the referendum, UN Secretary General Antonio Guterres had urged Iraq’s Kurdish leaders to scrap the vote saying it would undermine the ongoing battle against IS(Daesh).

Meanwhile, J. Michaeal Springmann, former US diplomat in Saudi Arabia, has told Tehran based Press TV on Tuesday that US and Israel have vast influence in Iraq’s semi-autonomous Kurdistan region and have great interest in the secession of Kurdistan from Iraq.

He said that “US encourages the Kurds to rebel against the government of Iraq”. He was quoted saying, “The United States and Israel have been doing their best for quite some time now to divide Iraq.”

“What they’ve got now is a holy partnership between the United States of America, the Kurds and Israel,” he said. The US diplomat further said, “Israel has great investment, great control and great influence in northern Iraq. They are looking at it as part of Greater Israel.”

Springmann was the head of American visa bureau in Jeddah from 1987 to 1989. Information available at Wikipedia says that he was “ordered by high level State Department officials to issue visas to unqualified applicants”. He states that these applicants were terrorist recruits of Osama Bin laden, who were being sent to the US in order to obtain training from CIA.

Kurdish people are ethnic group spread in the Middle East spanning in the south-eastern Turkey, north-western Iran, northern Iraq and northern Syria. Their total population is approximately 30 million. The governments of Iraq, Iran, Turkey and Syria have been opposing establishment of an independent Kurdistan in Iraq, apprehending it would encourage Kurds in other countries for similar demand.

Common perception among the people in the Middle East is that creation of a separate independent Kurdistan would in fact be the “creation of another Israel” in the region.