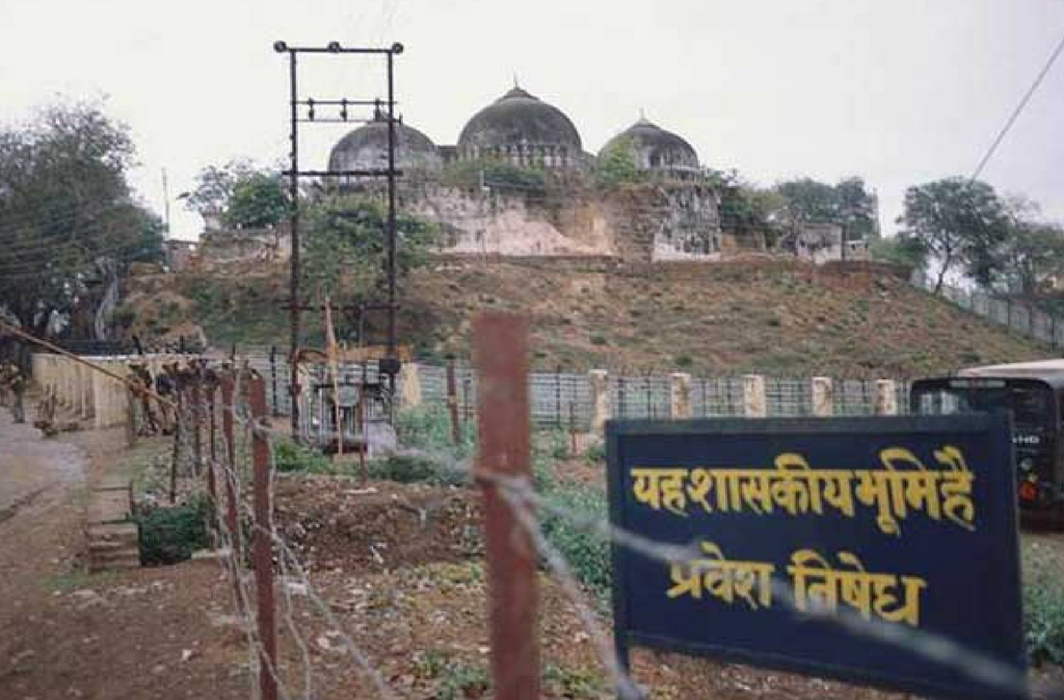 A three-judge bench of the Supreme Court, headed by Chief Justice Dipak Misra, today (Thursday,September 27), ruling that the Ismail Faruqui verdict in 1994 – that mosques are not integral to Islam – will not affect a decision on the Ayodhya title suit and refused to refer it to a larger bench for further clarification.

The judgment was delivered by a Bench of Chief Justice Dipak Misra and Justices Ashok Bhushan and S Abdul Nazeer.

Justice Bhushan wrote one judgment on behalf of himself and CJI Misra. Justice Nazeer wrote a dissenting judgment.

The Ismail Faruqui verdict, delivered by a Constitution Bench, had been challenged by a bunch of Muslim outfits during proceedings in the Babri Masjid Ram Janmbhoomi title suit. They had argued that the Faruqui case verdict – that mosques are not integral to Islam and thus not a prerequisite for offering namaz – was too “sweeping” and could influence the verdict in the Ram Janmabhoomi land dispute.

In the 2-1 verdict, Chief Justice Dipak Misra and Justice Bhushan held that there was no need to refer the Ismail Faruqui verdict to a larger bench.

The statement in Faruqui case was in the limited context of immunity claimed by the petitioners for the mosque from acquisition, Justice Bhushan said, adding that “it need not be read broadly to mean mosque can never be essential to practise of Islam”.

“The present case shall be decided on its own facts, the Ismail Farooqui judgment would have no impact on it,” Justice Bhushan added.

Justice Nazeer gave a dissenting opinion, stating that whether a mosque is integral to Islam or not is a matter that requires to be considered by a Constitution Bench. He said “questionable observations” in Faruqui ruling were “arrived at without undertaking comprehensive examination” and ‘have permeated” the judgement in the main Ayodhya title suit. He further stated that it needs to be brought in line with the Shirur mutt case. The next hearing has been slated for October 29.

Months after the demolition of the Babri Masjid in Ayodhya in December 1992 by Hindu radicals supported by the RSS-BJP combine, the Congress-led central government enacted the Acquisition of Certain Area at Ayodhya Act, 1993. A year later, in October 1994, a five-judge bench of the top court had, in the M Ismail Faruqui Vs. Union of India case, upheld the validity of the Act, vesting jurisdiction of the disputed land in Ayodhya to the Centre.

The fine print of the top court’s verdict, however, gave rise to a new legal conundrum that could, it was argued, be a critical legal precedent that has the potential of determining which way the judgment in the Babri Masjid-Ram Janmbhoomi title suit could go.

As reported by India Legal, Paragraph 82 of the Ismail Faruqui verdict states: “there can be no reason to hold that a mosque has a unique or special status”. The interpretation of this line has been taken, especially by the Hindu right that wants control of the disputed land to build a Ram Mandir, to be that the presence of a mosque was not a prerequisite for Muslims to offer namaz.

Additionally, it meant that the government was free to acquire the disputed land on which the Babri Masjid once stood and that a mosque – irrespective of its heritage value or the significance and faith attached to it by the Muslims – held no importance in Islam.

Several Muslims groups who are now party to the long running Babri Masjid-Ram Janmbhoomi title suit had petitioned the Supreme Court to review the Ismail Faruqui verdict on grounds that its reference to the irrelevance of a mosque for offering namaz was a “sweeping observation” and needed reconsideration as “it will have a bearing” on the final outcome of the land dispute.

The Uttar Pradesh government, along with Hindu outfits that are party to the title suit, have opposed the petitions that seek referring Ismail Faruqui to a larger bench. Their resistance is based on the argument that the Muslim outfits were raising the matter belatedly – nearly 25 years after the Ismail Faruqui verdict was delivered – with the sole purpose of delaying the judgment in the land dispute.

Among the arguments, made by counsels for the UP government and the Hindu outfits placing reliance on Ismail Faruqui, is that while the birthplace of Lord Ram cannot be shifted to another site, a mosque with no particular religious significance to the Muslims can be shifted as doing so will “not affect the right to practice religion by offering ‘namaz’ in other mosques”.

Countering these arguments, senior advocate Rajeev Dhavan, appearing for some Muslim petitioners in the title suit, had told the Supreme Court that the Ismail Faruqui verdict had failed to take note of the two critical issues – one, that the idols of Ram Lalla were placed in the disputed premises through an illegal act of trespass and two, the 1986 order by the Rajiv Gandhi-led central government to open the locks of the Babri Masjid premises and allowing the shilanyas was based was on the plea of a person who was not a party in the case and should not have been entertained. Dhavan had also submitted that the Ismail Faruqui verdict was “bad in law” as it denied members of one religious community their fundamental right to the freedom of practicing their religion while upholding the same right for the members of another faith.