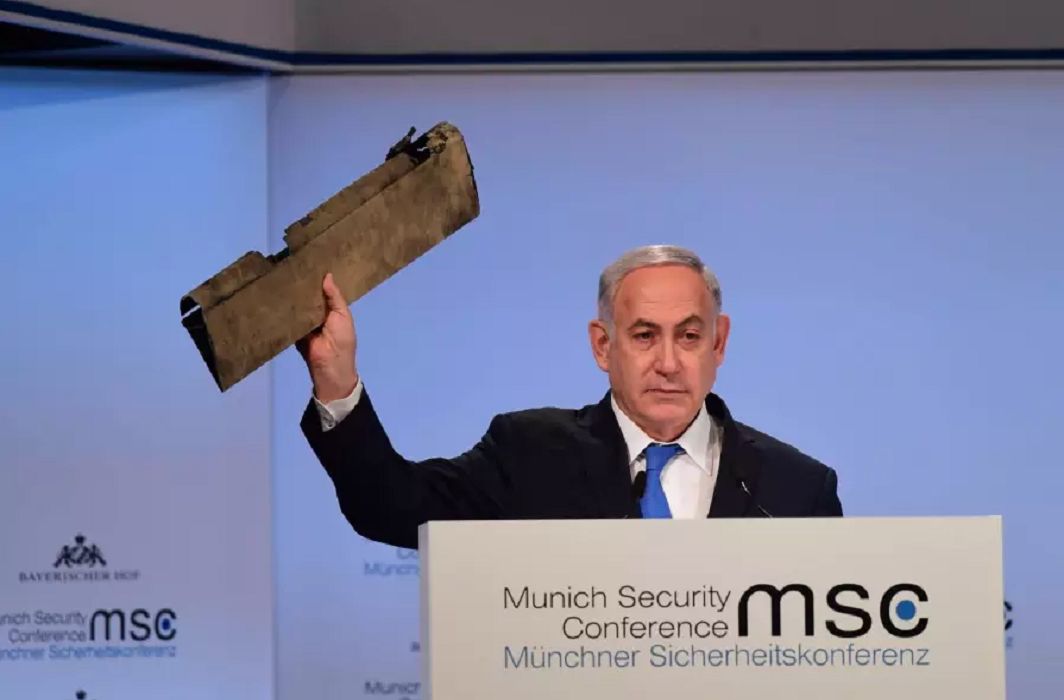 The situation in Middle East has once again escalated with Israeli PM Banjamin Netanyahu displaying piece of  an alleged Iranian drone (downed by Israel a week ago) in Munich Security Conference which was responded by Iranian foreign minister Javad Zarif dismissing  the allegations it as a “cartoonish circus, which does not even deserve a response” on Monday .

Jerusalem Post reports, Netanyahu brandished a piece of the  Iranian unmanned aerial vehicle that Israel downed a week ago after it entered Israel’s airspace and warned Iran “not to test Israel’s resolve.”

Netanyahu further said, “Iran also denies that it committed an act of aggression against Israel last week, that it sent a drone into our airspace to threaten our people.”  He pulled out the alleged Iranian prop from behind the podium and held it up with one hand.

“Well, here is a piece of that Iranian drone, or what’s left of it after we shot it down. I brought it here so you can see for yourself. Mr. Zarif, do you recognise this? You should. It’s yours,” Netanyahu said.

He said “Israel will not allow the regime to put a noose of terror around our neck.”We will act if necessary not just against Iran’s proxies but against Iran itself,” he added.

Netanyahu also tried to convince the conference participants against Iran nuclear deal.  He said that the inspection regime is incompletely insufficient. He said that at the end of 10 years agreement time Iranians will have an “open highway” to build not only one nuclear device, but an entire nuclear arsenal.

He pleaded saying “they should be stopped and slammed with the most crippling sanctions to prevent them from continuing the development of these [nuclear] delivery systems, these guns”.

Furthermore, Israeli PM said that the countries of the world “would have to decide whether they prefer dealing with the US or with Iran, which- despite the fact it has some 80 million people as compared to Israel’s 8.5 million- has an economy about the size of Israel’s.

Iranian foreign minister Javad Zarif, was among the audience who dismissed Netanyahu’s allegations. He said it as a “cartoonish circus, which does not even deserve a response”.

Zarif also said that the recent shooting down of an Israeli F-16 after it bombed an Iranian site in Syria had shattered Israel’s so-called invincibility.”

He said, “About Netanyahu’s unwise words, I should say that if they carry out the slightest unwise move against Iran, we will level Tel Aviv to the ground and will not give any opportunity to Netanyahu to flee.”

The Friday prayers in Tehran and other cities are marked with anti Israel and anti-US slogans round the year. Iran played important role in defeating Daesh (IS) in Iraq and Syria.