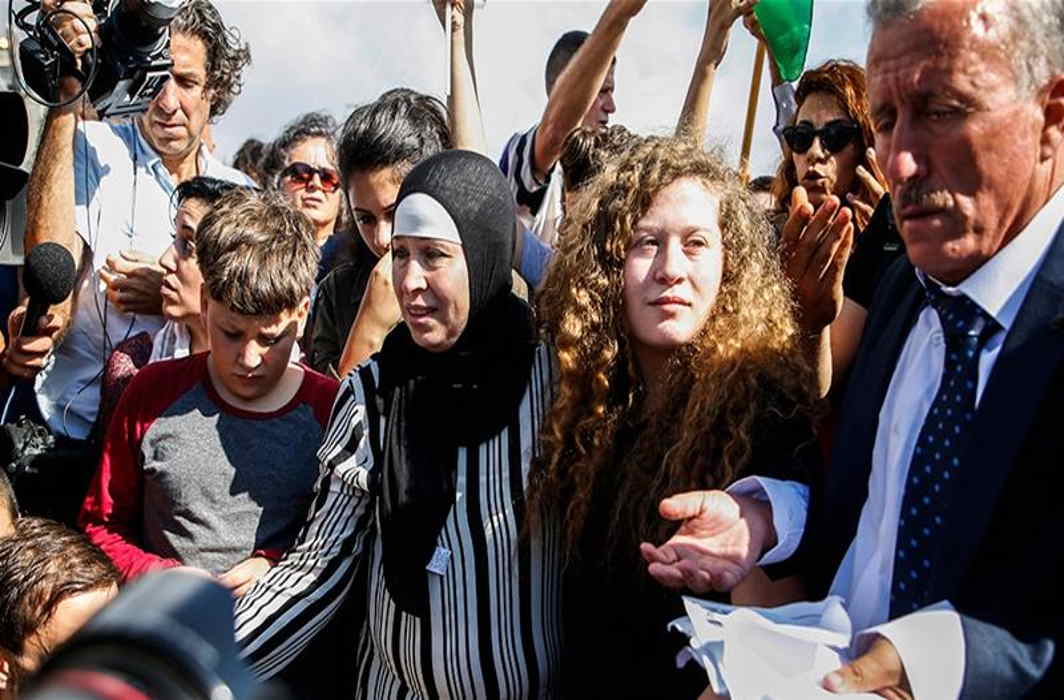 Israel has released 17-year-old Palestinian protest icon Ahed Tamimi from prison early on Sunday, after she, along with her mother, has served eight-month sentence for slapping and kicking Israeli soldiers in front of her family home in Nabi Saleh locality in December last year.

According to Saudi owned Al-Arabiya news, Ahed, the young icon who received support from sympathisers worldwide, and her mother Nariman Tamimi, were then transferred by Israeli army to the Palestinians territories, where a festive homecoming awaited them in their hometown village.

Her mother filmed Ahed Tamimi slapping Israeli soldiers and posted it on Facebook, where it went viral and instantly turned her into symbol of resistance. With her unruly mop of curly red hair, the Palestinian teen quickly became an icon.

In Nabi Saleh, supporters welcomed Tamimi home with banners and Palestinian flags planted on the roof of her home. Hundreds of chairs were set up for well-wishers in the courtyard.

Her father, Bassem Tamimi, said he expects her to take a lead in the struggle against Israeli occupation. Ahed was 16 when she was arrested and turned 17 in custody. Her case has trained a spotlight on the detention of Palestinian minors by Israel. Some 300 minors are currently being held in Israeli prisons, according to Palestinian figures.

Israel captured the West Bank, Gaza and east Jerusalem in the 1967 Mideast war. Palestinians are increasingly disillusioned about efforts to establish a state in those territories, after more than two decades of failed negotiations with Israel.

The chances of establishing state of Palestine has gone dim after US President Donald Trump has recently recognised Jerusalem as Israel’s capital and moved its embassy to the holy city. Earlier, Palestinians were being assured that East Jerusalem will be their capital under two state solutions.

US have been, for decades, mediating the unsuccessful peace process where Palestinians were represented by PLO, who are considered to be hand in gloves with Tel Aviv and Washington. However, no territory was given back to Palestinians during all these years. Israelis were forced to withdraw from south Lebanon in 2000 by Hezbollah fighters, the only territory Israelis left after occupation.

Read More: Palestine to ask India to replace US as sole mediator in negotiations with Israel, says official