Home Special tv shows Mudda (debate show) “It is a government of events, not of works” 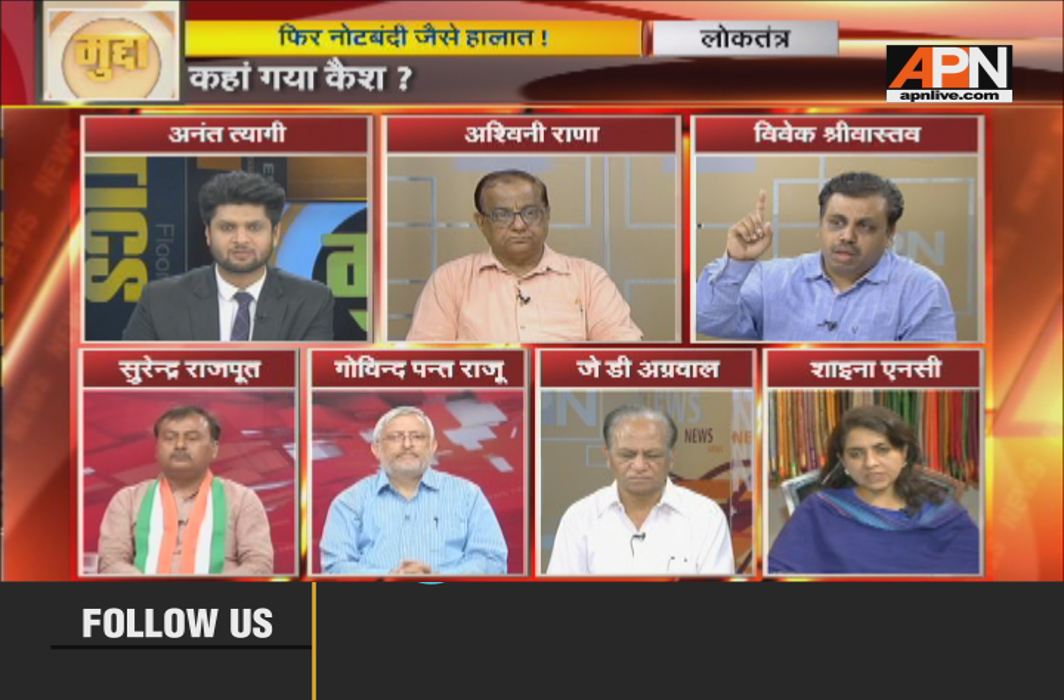 Mudda panellists feel that the government’s economic plans continue to falter, which is why banks are facing mounting NPAs, and some states are running short of currency notes

After note ban, again there is currency shortage, and long queues can be seen outside ATMs in some areas, in states like Bihar, Assam, UP, Gujarat, Chhattisgarh, Uttarakhand and so on. APN’s popular debate took up the issue. Where are the acche din? Where is the promised economic welfare? Anchorperson Anant Tyagi asked the questions to panelists including BJP’s Shaina NC, Congress’s Surendra Rajput, CPI’s Vivek Shrivastava, economist JD Aggarwal, banker Ashwani Rana, and APN consultant Govind Pant Raju.

Rana said: “There is no cash shortage. The RBI has put in sufficient money in market. The problem is that new notes have not been printed. The cropping season is here, and businessman buying crops have money in hand, but that money is not in circulation. Elections also affect circulation of currency.”

Raju said: “The government has taken novel and breakthrough economic steps, but the common man is still suffering. The government must accept responsibility for this. Farmers are forced to undersell their produce.”

Shaina NC said: “Demonetisation has helped to weed out corrupt practices. Post GST, see how fast GDP is moving. Modiji is on the right track and we should support the government policies. We will have to trust the finance minister and the PM. There may be problems along the way, and patience is required.”

Aggarwal said: “Restrictions on cash withdrawal/ cash deposit etc shows that there is a liquidity crisis. The PM wants to move to a cashless economy. But right now, due to the cropping season, and elections, there is need to have money in hand.”

Shaina NC said: “People can feel frustrated, especially in view of the really massive economic changes that have been made. These changes were important to ensure that the country is safe and economically sound policies are in place.”

Shrivastav said: “Note ban was the biggest economic disaster of the country. It is a government of events, not a government of works, they are only good at event management.”

Rajput said: “Shaina NC is talking like she is reading out some katha-pravachan.  The government seems to be like a surgeon who performs surgery where it is not needed, and the problem remains the same. Shaina NC should do a reality check.”

Shaina NC said: “When we won in 2014, people wanted to see an honest government that works. Modi ji has the courage of conviction to take bold steps. Cash shortage is there, but please trust Arun Jaitley and the RBI governor. The government has taken strong steps vis a vis insolvency laws and bankruptcy laws.”

Rajput said: “The people need to see a government whose works are seen on the ground.”

Shrivasatav said: ”The finance minister comes from the law background. No doubt that this government is an expert in misgovernance.”

Aggarwal said:”I don’t agree with Shrivasatav that the government has failed. Might be that people somehow are feeling that banks don’t have the cash. This is because of bank restrictions.”

Rana said: “People are hoarding. Because of rumors, people are lining up in front of ATMs whether they need the cash or not.”

Shaina NC: “People should realize that Modiji’s policies and intentions are clear.”

Aggarwal said: “Shortage is due to hoarding and poor circulation. If bad loans are mounting, banks will face shortage. Loan recovery should be put on the fast track.”

Raju said: “There is a problem in cash flow. NPAs have also had an affect. PM should talk about this issue in his Mann ki Baat.”

Aggarwal said: “It’s not that implementation is shoddy. Banks have less money due to NPAs.”

The Delhi government on Thursday informed the High Court that no night curfew will be imposed in the national capital or parts...
Read more