Home Opinion & analysis It was Mountbatten who took the Kashmir case to UN, not Nehru:... 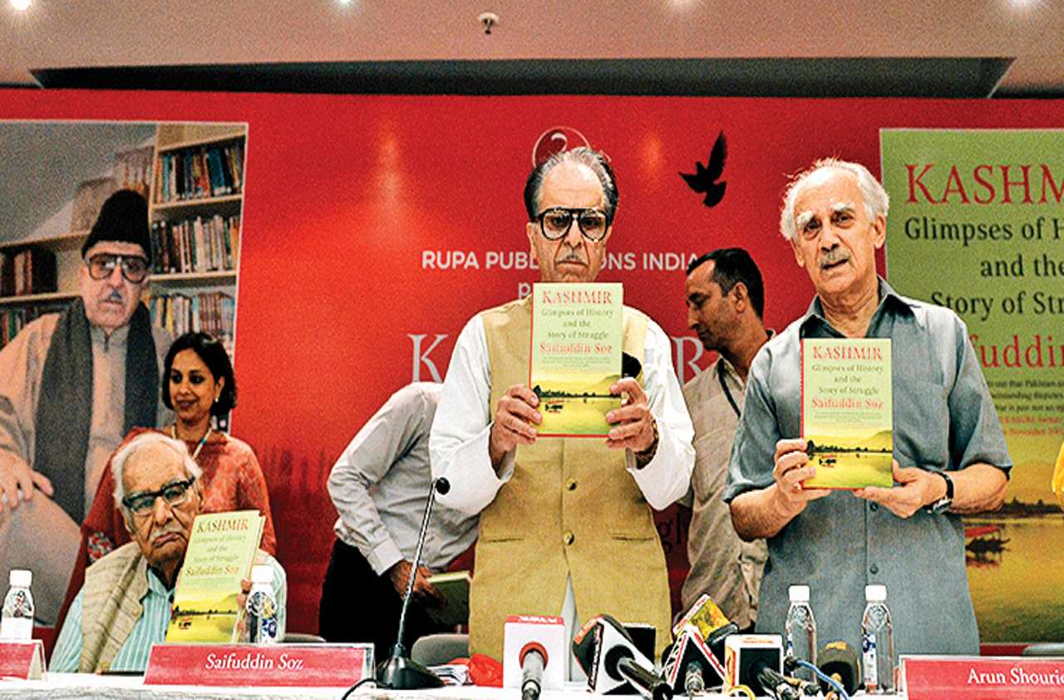 Former union minister Prof Saifuddin Soz book ‘Kashmir: Glimpses of History and the Story of Struggle’ strongly emphasises on the need for Pakistan and India to resolve their long standing disputes particularly over Jammu and Kashmir.

Kashmir may appear to be an intractable problem but there is little doubt in Soz’s mind that if the government launches a strong political initiative with the people in the valley, they will respond with reasonableness and cordiality.

He believes it has become a problem because Union of India could not handle Kashmir properly and entrusted work of political outreach to intelligence agencies who have “small minds” and “know only how to play petty politics”.

Nehru took a lot of interest in Kashmir. Nehru remained close to the National Conference and to Sheikh Abdullah. In 1945, at the Sopore Session of the National Conference when the New Kashmir doctrine was adopted which was to determine their policy for the future, Nehru addressed that session speaking before more than two lakh people.

Sheikh Abdullah kept National Conference away from Muslim League and he kept a distance from the Congress.  Nehru addressed that session and that is part of Nehru’s political legacy. Sardar Patel was more pragmatic. In the Partition Council debates he told Liaquat Ali Khan to  stop the bickering since till only yesterday we were one   country. He told him why are you talking of Hyderabad Deccan since it is not connected to Pakistan by either road or by rail. Take Kashmir instead he said. When Union’s (of India) army landed in Srinagar, the same afternoon Mountbatten was in Pakistan. He had a dinner meeting with Liaquat Ali Khan. He thought Liaquat was preparing for war.

In the books written by Shaukat Hayat Ali titled ‘A Nation Lost Its Soul’ describes how when Mountbatten had come to Lahore, the principle of how a state whose subjects make up a majority of a community and the state is contiguous to the adjoining dominion would accede to the adjoining country must be followed.  But Liaquat was not willing to give up his claim on Hyderabad leading him to state that Liaquat neither understood history, nor did he understand geography.

Nehru tried but then August 9, 1953 occurred. (the day Sheikh Abdullah was dismissed from office and put behind bars) From the very beginning intelligence people handled political work in Kashmir. Nehru was opposed to Sheik’s arrest but he was over ruled by his Cabinet. Gandhi had been a bridge of understanding between Nehru and Patel but on his assassination Nehru lost a big support. He lost his vigour to combat communal forces inside and outside parliament.

Musharraf subsequently built bridges with Manmohan Singh. Manmohan Singh is a sure footed person who proceeds carefully but does not create hype. Singh envisioned a situation where (he hoped) people could have breakfast in Amritsar, lunch in Lahore and dinner in Kabul. But this was not to be because of Pakistan’s own internal security issues. Lal Masjid happened causing violence and unrest all around and then Musharraf had problems with his own judiciary.

Muscular policy will not work here. Kashmiris will get killed but the problem will not be solved.  This will mean only more bloodshed.  The only thing that will work is a powerful political dialogue. The government must talk to the Hurriyat.  They must talk to the angry youth of Kashmir. Start a dialogue with them then move forward to other actors.

When you open a dialogue, then you must perforce speak to the parties that don’t agree with you. That is why speaking to the Hurriyat is important because they vocalise the anger of the youth. When Hurriyat calls for shutdowns, it occurs, so how can people say they do not have a following. In order to move forward, they must talk to people.

But I still say, civil society must also have a dialogue with the RSS.