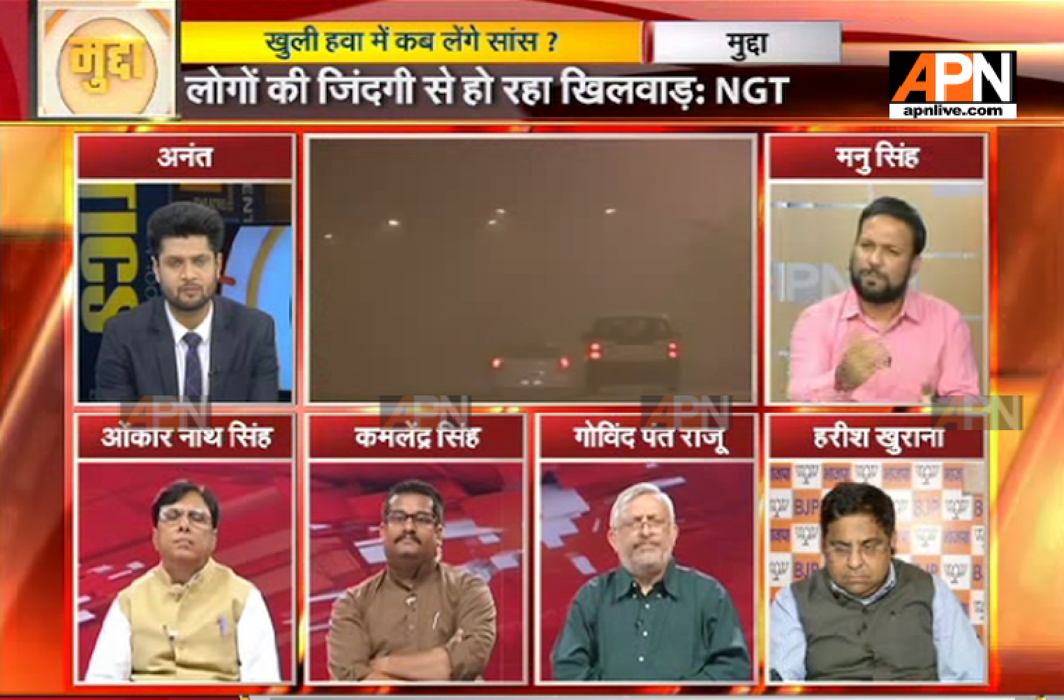 Mudda talking heads hunt for solution to Delhi air pollution crisis, puts it down to policy failure and call for greater use of public transport

Since Sunday, pollution in Delhi has risen to unprecedented levels. Thick smog has enveloped New Delhi and its neighboring areas, forcing schools to shut down, halting traffic and making people stay indoors. A “public health emergency” has been declared.

Kamlendra Singh said: “This is not only an issue of Lucknow or Delhi. This issue should not be politicised. Everyone should come together and work to solve it. We should first sit and understand the reasons. Why farmers are burning stubble? Why isn’t there any regulation of petrol and diesel cars? Plant trees in open spaces. The AAP government has taken a couple of steps to fight against pollution. We took steps so that dried leaves and residues that the safai karmcharis collect every morning from streets are not burned up. One of the main reasons of pollution is unregulated construction that takes place in numerous places in Delhi and Noida.”

Harish Khurana reiterated the same thought—that this is a medical emergency. He added: “Delhi has become a gas chamber. Sadly, instead of finding a solution, people are engaging in a blame game. This is not a BJP or Congress issue. It is about our future. The AAP is blaming the centre but what has the Delhi government done to tackle traffic pollution? Delhi’s traffic contributes to eighty percent of this pollution.”

Onkar Nath Singh talked about solutions. He said the farmers should be provided with an alternative to stubble burning. He further said: “This is a serious issue. Just by talking we cannot solve it. Every citizen should work with the government in tackling this. People should refrain from using cars as much as possible. Public transport should be such that people from every corner of the city should be able to use it conveniently.”

Govind Pant Raju called our present lifestyle and the attitude of the present government a “suicide mission”. He said: “More than a policy failure, this is a suicide mission. We are putting the future generation at risk. We all can see what the current government or the previous governments have done to solve this problem. Why should stubble burning be made a political issue? Why aren’t political leaders doing anything for it? Why haven’t we given such powers to the NGT so that it can take necessary steps? We should devise a plan and follow it religiously.”

Manu Singh said everyone knew about the problem but no one did anything about it. He said: “This is that time of the year when there’s almost no wind movement. Hence particulate matter accumulates in the air. This is dangerous to our health.”