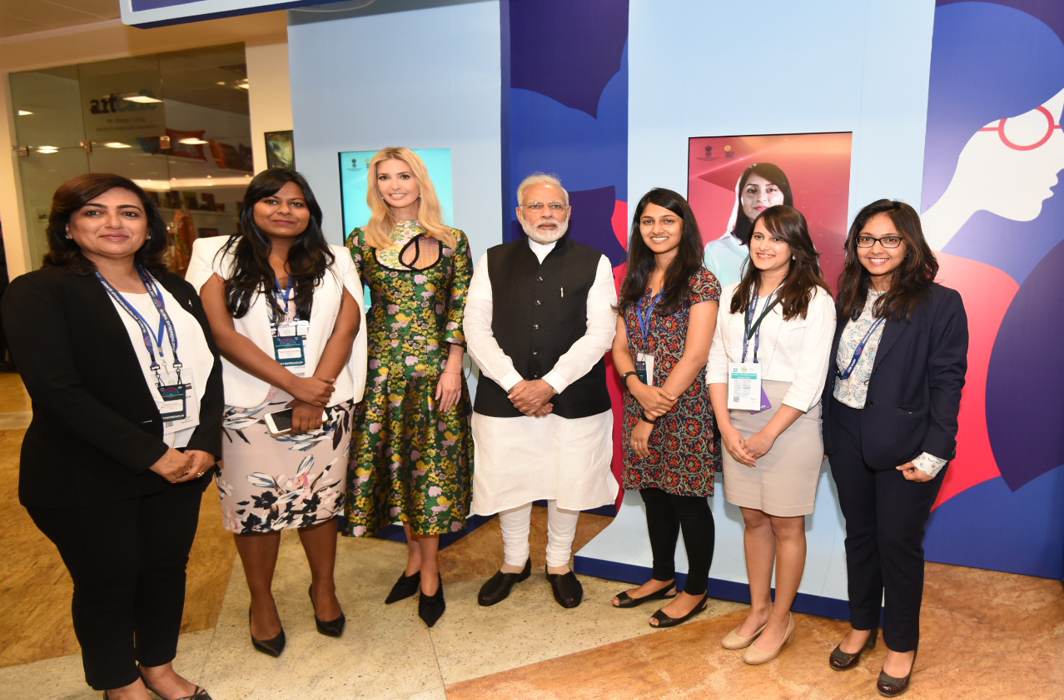 Advisor to her father, US President Donald Trump, Ivanka says Modi’s journey from a tea-seller to Prime Minister shows transformational change is possible

As she addressed the inaugural session of the Global Entrepreneurship Summit, 2017 in Hyderabad on Tuesday, Ivanka Trump – daughter and advisor of US President Donald Trump – unveiled a charm offensive for India in general and Prime Minister Narendra Modi in particular.

At a time when the Congress and BJP are embroiled in a bitter war of words over the former chiding Narendra Modi’s ‘chaiwala’ past, Ivanka began her address drawing on the same issue but in a manner that the Indian Prime Minister is not only likely to take pride in but also paraphrase to his advantage while campaigning for the upcoming Gujarat Assembly polls.

What you are achieving here is truly extraordinary. From your childhood selling tea to your election as India's Prime Minister, you've proven that transformational change is possible: Ivanka Trump at #GlobalEntrepreneurshipSummit pic.twitter.com/1nfAlCq6zR

Full of praise for Modi’s leadership of India – a country she described as a “beacon of democracy and a symbol of hope to the world” – Ivanka said of the Prime Minister: “From your childhood selling tea to your election as India’s Prime Minister, you’ve proven that transformational change is possible. And now you are bringing that promise to hundreds of millions of people across your country.”

This is Ivanka’s first major outing as head of a US delegation outside of her country, a fact that has reportedly not gone down well with the top brass of her father, US President Donald Trump’s administration, especially US Secretary of State Rex Tillerson. However, if her address at the GES 2017 is anything to go by, Ivanka Trump hasn’t let the machinations back home come in the way of her ambition of carving a global profile for herself.

Below are key excerpts from her address at the inaugural session of the three-day Global Entrepreneurship Summit, 2017 – the eighth version of which is being hosted by India in Hyderabad

–          “Through your own enterprise, entrepreneurship, and hard work, the people of India have lifted more than 130 million citizens out of poverty – a remarkable improvement, and one I know will continue to grow under the leadership of Prime Minister Modi.”

–          I want to applaud Prime Minister Modi for his firm belief that “The progress of humanity is incomplete without the empowerment of women.”

–          This is the first time India has hosted the Global Entrepreneurship Summit. It is a symbol of the strengthened friendship between our two peoples, and the growing economic and security partnership between our two nations. As President Trump said earlier this year: India has a true friend in the White House.

–          It’s wonderful to be in this ancient city brimming with transformative technology – now, your tech centers may even outshine your world-famous Biryani.

–          Today, we come together to celebrate what is happening here in India, what is happening in the United States – and all over the world: entrepreneurs are revolutionizing our economies, and improving our societies. You are rewriting the rules. You have the inspiration and drive to serve our communities through the projects you start and the businesses you build.

–          Each of you started with an idea. You’ve worked long days and nights to code the next robot, create the next app, find the next cure, and discover the next breakthrough to improve millions of lives.

On Women as Entrepreneurs

–          This year’s Summit is focused on a theme that is key to our future: WOMEN FIRST, PROSPERITY FOR ALL. I am proud that for the first time ever, women make up the majority of the 1500 entrepreneurs selected to attend. Only when women are empowered to thrive; will our families, our economies, and our societies reach their fullest potential.

–          As a former entrepreneur, employer, and executive in a male-dominated industry, I have seen firsthand that all too often, women must do more than their male counterparts to prove themselves at work, while also disproportionately caring for their families at home.

–          Globally, between 2014 and 2016, entrepreneurship activity among women increased by 10 percent. In the United States, within the last decade, the number of women-owned firms has grown by 45 percent. Even more promising, minority women have started nearly 8 in 10 new women-owned businesses. Today, more than 11 million women in the United States own businesses. They employ nearly 9 million workers, and generate over $1 trillion dollars in revenue.

–          Despite the soaring rate of female entrepreneurs, women still face steep obstacles to starting, owning, and growing their businesses… In developing countries, 70 percent of women-owned small and medium-sized businesses are denied access to capital. The result has been a nearly $300 billion dollar annual credit deficit for women entrepreneurs in the developing world.

–          In the United States, a Harvard Business Review report found that investors ask men questions about their potential for gains whereas they ask women questions about their potential for loss. This could in part explain why women entrepreneurs received less than 3 percent of venture capital funding in 2016. We are working to reverse this trend. The U.S. Small Business Administration, for example, increased its lending to women by over $500 million dollars this year alone.

–          This summer, at the G20 conference, the United States was a founding member of a bold, new initiative with the World Bank – the Women Entrepreneurs Finance Initiative, or WeFi… WeFi is the first facility to support women entrepreneurs at this scale, and we anticipate it will be able to leverage in excess of $1 billion dollars in public and private financing. This facility also seeks to address the legal and regulatory barriers that limit opportunities for women entrepreneurs.

–          When women work, it creates a unique multiplier effect.  Women are more likely than men to hire other women, and to give them access to capital, mentorship and networks. Women are also more likely to reinvest their income back in their families and communities.