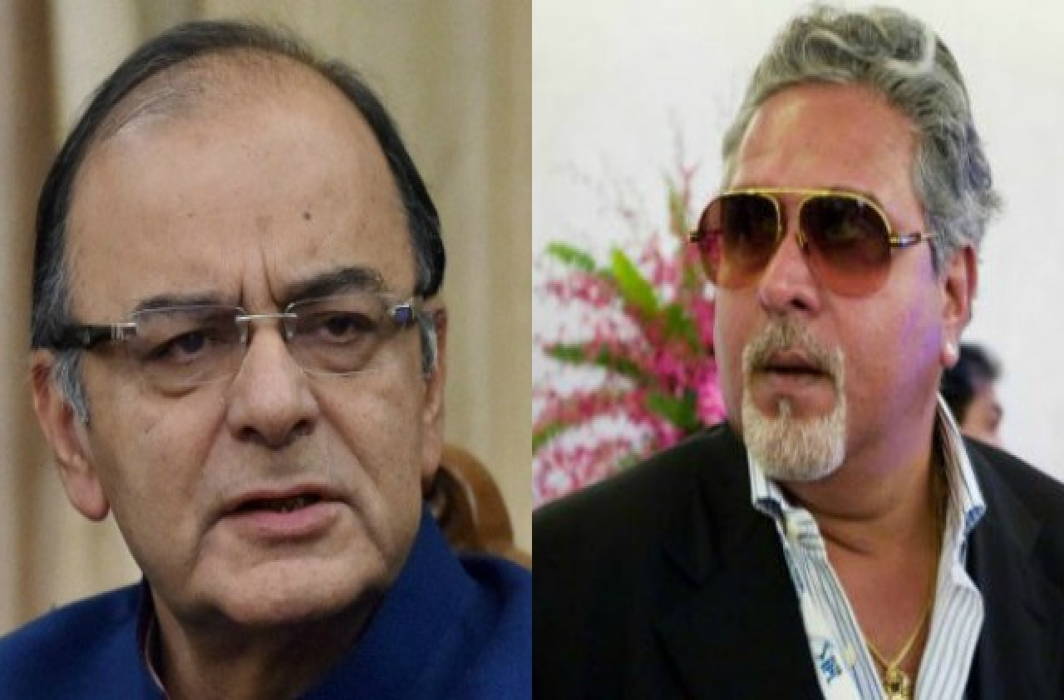 In an outright rejection of Finance Minister Arun Jaitley’s assertion of having met the fugitive millionaire Vijay Mallya, the Congress on Thursday, September 13, said the two had a meeting and discussion in Parliament just two days before the latter’s flight to UK and challenged the government to check the CCTV footage to check the truth.

A day earlier, the FM had rubbished Vijay Mallya’s claim that he had met him before leaving for London in 2016.

“It was a 15-20 minute, sit-down meeting…The finance minister has to explain to the country why he has colluded with the criminal and why was he having a meeting with a criminal, what was discussed?” Rahul Gandhi said.

PL Puniya said he had seen Mallya and finance minister Jaitley speak in the Central Hall of parliament in March 2016, days before the liquor baron left India and flew to the UK amid attempts to recover over Rs. 9,000 crore in unpaid loans from him.

“I was in the central hall of Parliament House. I saw Jaitley and Mallya standing and talking in the corner. After 5-7 minutes, they sat on the bench and started talking. Mallya had come for the first time just to meet Jaitley,”Puniya said. “It is my challenge. You can look at CCTV footage and see if I am wrong. If I am wrong, I will resign,” he declared.

“After that on March 3 – heleft for London on March 2 – myreaction was: he met Jaitley two days ago,” said Punia.

Arun Jaitly is lying. I saw him having prolonged meeting in Central Hall of Parliament about two days before he was allowed to escape from India. Choukidar is not only Bhagidar but also Gunahagar. @INCIndia@INCChhattisgarhhttps://t.co/VJkDk1ZCkK

Mallya, 62, flamboyant liquor baron and former parliamentarian, is being investigated for fraud and money-laundering. In the UK for the past two years, he has been fighting India’s attempts to bring him back to face trial.

Asked whether he was tipped off about the investigations, Mallya told reporters yesterday outside a UK court hearing a case on his extradition to India: “I left because I had a scheduled meeting in Geneva. I met the finance minister before I left, repeated my offer to settle with the banks. That is the truth.”

Mallya said he had also told the minister that he was leaving for London.

Arun Jaitley, who was the finance minister in 2016 when Mallya left India, emphatically denied his claims. “Since 2014, I have never given him any appointment to meet me and the question of his having met me does not arise,” he wrote on Facebook.

“He misused that privilege (of being an MP) on one occasion while I was walking out of the House to go to my room. He paced up to catch up with me and while walking uttered a sentence that ‘I am making an offer of settlement’ …Having been fully briefed about his earlier ‘bluff offers’, without allowing him to proceed with the conversation, I curtly told him ‘there was no point talking to me and he must make offers to his bankers’,” Jaitley said.

Speaking to news agency ANI, Jaitley said: “I have never given him an appointment. Never at my office, never at my residence. Nor have I ever offered to meet him. I do remember on one occasion he misused his privileges as member of Rajya Sabha and while I was walking out of Rajya Sabha to my room, he paced up towards me in Parliament building and suggested that he was going to make some offer of settlement. I did not even bother to get any detail from him. I curtly told him he must go and make it to the bankers because I was fully aware that he had been bluffing on several occasions in the past and he had no intention of paying back the banker’s money.”

“Besides this one-sentence exchange where he literally barged on to me while I was walking and tried to make some offer or suggestion which I refused to entertain, there is no question of my having met him, spoken to him… I even did not receive any paper from him at that time. And therefore, to convey an impression that he met me with an offer of settlement and if this is what he is referring to then this is not correct and he must come out with the complete facts,” Jaitley said.

Accusing Jaitley of colluding with fugitive business tycoon Vijay Mallya, Rahul Gandhi said, “He (Jaitley) had not informed ED, CBI. What does it mean? He has to explain why when a criminal has told him he is running away to London, he has done nothing.”

He also referred to questions swirling around the dilution of a lookout notice against Mallya by the CBI. “Who changed the notice on Mallya’s arrest? If Jaitley has done it himself, then he should confess. It’s an open and shut case.”

Demanding that Jaitley resign, Gandhi said: “Finance Minister is responsible to take action against economic offenders. Finance minister himself is meeting them. Finance minister has admitted that Mallya told him he is going to London. Yet the Finance Minister took no action. Did not inform CBI, ED or other arms of the govt. Why? What was the deal? There is a notice to restrain Mr Mallya. That notice is changed from a restrain notice to an inform notice. Who did it? There are only two people – Prime Minister and Finance Minister,” he alleged.

Not just the Congress and other Opposition parties, BJP’s Subramanian Swamy also unleashed an attack on the finance minister.

Mallya could not escape from India because of a strong Look Out Notice for him at airports. He then came to Delhi and met someone who was powerful enough to change the Notice from blocking his departure to just reporting his departure. Who was that person who dilute this LON?

I learn from my sources that the Lookout Notice issued by CBI for Mallya was modified from “Block Departure” to “Report Departure” on October 24, 2015 on orders from someone in MoF. Who?

We have now two undeniable facts on the Mallya escape issue: 1. Look Out Notice was diluted on Oct 24, 2015 from “Block” to “Report” departure enabling Mallya to depart with 54 checked luggage items. 2. Mallya told FM in Central Hall of Parliament that he was leaving for London.

On Wednesday, Rahul Gandhi had demanded an immediate investigation into the “extremely serious” allegations and Jaitley’s resignation.

“Given Vijay Mallya’s extremely serious allegations in London today, the PM should immediately order an independent probe into the matter. Arun Jaitley should step down as Finance Minister while this probe is underway,” Gandhi tweeted.

Party spokesperson Abhishek Manu Singhvi said that for the past 18 months, the Congress had been asserting that not only Mallya, but Mehul Choksi and so many others had been allowed to leave the country with impunity. And despite the hullabaloo to bring them back, the Narendra Modi government had failed to do so.

Congress media in-charge RandeepSurjewala in a tweet said that Mallya’s “consultation meetings” with the “Fiscal Management Blog Minister” makes it clear that the BJP is running “tour travels and immigration” for “loot scoot and settle abroad” brigade.

The Congress, which has since March 2016 consistently held that Mallya met the finance minister a day before he fled the country, said on Wednesday that the government’s complicity in facilitating the escape had now been established.

Within minutes of the revelation by Mallya, Congress communications chief RandeepSurjewala: “Vijay Mallya met Arun Jaitley, sought his permission and ran away with India’s money. Chowkidar nahin, bhagidarhai (Not a custodian, a partner).”

Rahul had first aimed the “chowkidar nahin, bhagidarhai” barb at Modi in Parliament, bringing up his promise to voters in 2014 that he would guard over India’s wealth and alleging that he had turned a partner in corruption instead.

On Tuesday, the Congress released the Modi government’s reply in Parliament that said the Prime Minister’s Office was aware of complaints against Nirav Modi and Mehul Choksi in 2016, long before the uncle and nephew fled the country.

The Congress has been alleging a Mallya-Jaitley meeting since March 2016, the month the liquor baron escaped.

On March 14, 2016, Surjewala had told a news conference that Mallya had met Jaitley before he fled. Surjewala had said: “Mallya was present in Parliament on March 1, 2016, where he reportedly met finance minister Jaitley and had a conversation with him. We all know what happened then, while CBI, banks, SFIOs, SEBI, IT, Service Tax, etc were looking for him, yet he left on March 2.”

Surjewala had further said: “People now understand the reason for converting a CBI look-out notice of detention to information only.”

CPI(M) general secretary Sitaram Yechury said Mallya’s revelation puts the Modi government in the dock. This only reconfirms how the government enabled big defaulters to loot public money and scoot.

Delhi Chief Minister Arvind Kejriwal too questioned that the Prime Minister Narendra Modi and his ministers need to explain their meetings with the economic fugitives. “PM Modi meets Nirav Modi before he flees the country. Finance Minister Vijay Mallya before he flees India. What transpired in these meetings? People want to know,” he said.

Not only Finance Minister, the entire BJP must come clean on its relations with Vijay Mallya, BJP rebel Yashwant Sinha said. Mallya was elected to Rajya Sabha with support of BJP.