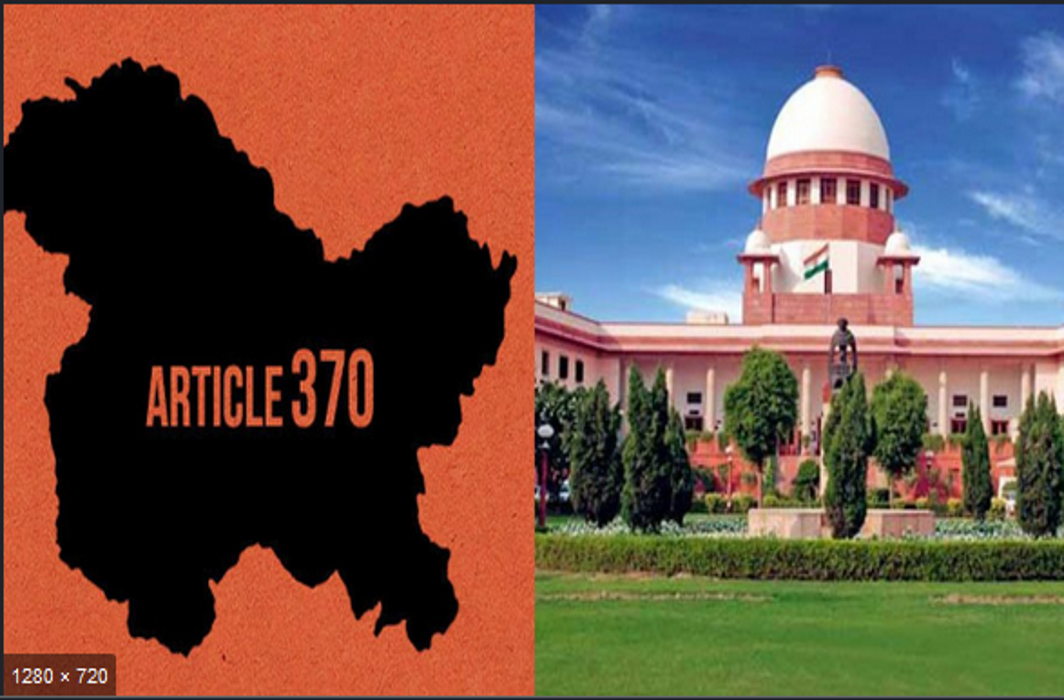 The Supreme Court today (Wednesday, Aug 28) referred to a five-judge Constitution Bench the petitions challenging the Narendra Modi government’s revocation of special status of the State of Jammu and Kashmir under Article 370 and bifurcation of the state into two Union Territories.

The bench of CJI Ranjan Gogoi, Justice SA Bobde and Abdul Nazeer issued notice in the matter while fixing the first week of October to hear it. The court also sought a response from the Centre and Jammu and Kashmir administration.

“We will refer the matter to a five-judge Constitution bench”, the bench said while not accepting the arguments that the issuance of notice will have a “cross-border repercussion”.

The government, represented by Attorney General KK Venugopal and Solicitor General Tushar Mehta, were urging the court to exercise restraint as far as orders and oral observations on Jammu and Kashmir were concerned.

“Notice is issued for the purpose of intimating parties to be present for the hearing. We are already here”, said Mehta, adding that “it had repercussions in other countries”. Ramachandran wondered how the court issuing notice in the normal course “can embarrass anyone”.

Mehta replied that it “doesn’t embarrass anyone, but other countries are taking advantage”. Attorney General KK Venugopal also urged the court not to issue a notice saying “this is a very serious issue”.

As the counsel appearing for both sides were involved in arguments and counter-arguments, the bench said, “We know what to do, we have passed the order, we are not going to change”.

“Let all the petitions on Article 370 issue go to a five-judge Bench for hearing,” Chief Justice of India (CJI)Ranjan Gogoi, heading the three-judge Bench, said.

The CJI indicated the Constitution Bench may start hearing the matter from October beginning.

On communication blackout in Kashmir

The bench also issued notice on the petition by Kashmir Times Executive Editor Anuradha Bhasin challenging what she claimed was the “communication blackout” in J&K.

Her petition sought a relaxation of restrictions and to allow journalists “to practise their profession and exercise their right to report freely on the situation prevailing in J&K after clampdown on the entire State on August 4, 2019”.

Bhasin, represented by senior lawyer Vrinda Grover, described the ground situation as that of “absolute and complete Internet and telecommunication shutdown, severe restrictions on mobility and sweeping curtailment on information sharing in the Valley, at a time when significant political and constitutional changes are being undertaken in Delhi to the status of J&K”.

She said the information blackout was “fuelling anxiety, panic, alarm, insecurity and fear among the residents of the Kashmir”.

The three-judge Bench also allowed Sitaram Yechury, general secretary of the Communist Party of India (Marxist), to visit Jammu and Kashmir to meet his party colleague MY Tarigami.

Yechury, represented by senior advocate Raju Ramachandran, said he wanted to meet Tarigami as there was no news of him. He wanted to know about the welfare and whereabouts of his colleague.

Mehta saidTarigami’s health was monitored every day and “he is hale and hearty”. “What can happen to him [Tarigami]? He is provided Z-category security.”

“Whether he has Z or Z Plus category, if a citizen wants to go and meet him, you have to let him,” Chief Justice Gogoi told Mehta.

Mehta said the government would make arrangements to escort Yechury.

The Chief Justice retorted, “You don’t escort, he [Yechury] will go on his own.”

Chief Justice Gogoi also agreed to Ramachandran’s assurance that Yechury would give an undertaking to limit his trip to J&K only to meet Tarigami and not travel around.

“If he does that, you report back to us,” the Chief Justice told Mehta.

Others petitions on Article 370 and J&K

National Conference leaders, and a Kashmiri lawyer are among the petitioners that have challenged the Centre’s August 5 decision to scrap Article 370.

The various petitions include one by the National Conference party challenging the Centre’s “unilateral” move to impose curfew and unravel the unique federal structure of India by dividing Jammu and Kashmir “without taking consent from the people,” IAS officer-turned-politician Shah Faesal, activist Shehla Rashid, Advocate ML Sharma and a plea by young lawyer Mohammed Aleem Sayed, worried about his aged parents in the Valley.

The petition filed by detained politician Shah Faesal and Shehla Rashid Shora contended that the August 5 Presidential Order and the Jammu and Kashmir Reorganisation Act of 2019 were arbitrary. They also challenged the proclamation of President’s Rule in the State in December 2018.

The three-judge Bench allowed the young lawyer Sayed to meet his parents. It asked the State to provide him adequate protection. The court took up his case first.

The main petitionschallenge the Centre’s sudden move to “unilaterally unravel the unique federal scheme, under cover of President’s Rule, while undermining crucial elements of due process and the rule of law”.

They said what happened to Jammu and Kashmir “goes to the heart of Indian federalism”.

The NC petition said, “National integration is best served by a pluralistic federal model. Under this model, one size need not always fit all.”

The petitions said the Presidential Order substituted the concurrence of the Governor for that of the State government to change the very character of a federal unit.

The Presidential Order took cover of a temporary situation, meant to hold the field until the return of the elected government, to accomplish a fundamental, permanent and irreversible alteration of the status of the State of Jammu and Kashmir without the concurrence, consultation or recommendation of the people of that State, acting through their elected representatives, they said.

They argued that the order used Article 370 to demolish Article 370. It amounted to the overnight abrogation of the democratic rights and freedoms guaranteed to the people of Jammu and Kashmir upon its accession.

The basic purpose of Article 370 was to facilitate the extension of constitutional provisions to the State in an incremental and orderly manner, based upon the needs and requirements, without dismantling the State Constitution.

The August 5 order, by replacing the recommendation of the ‘Constituent Assembly’ with that of the ‘Legislative Assembly’ in order to alter the terms of Article 370, assumed that the Legislative Assembly of the State of Jammu and Kashmir had a power that its own Constitution, under Article 147, denied to it. Thus, the August 5 order was ineffective, the petitions said.