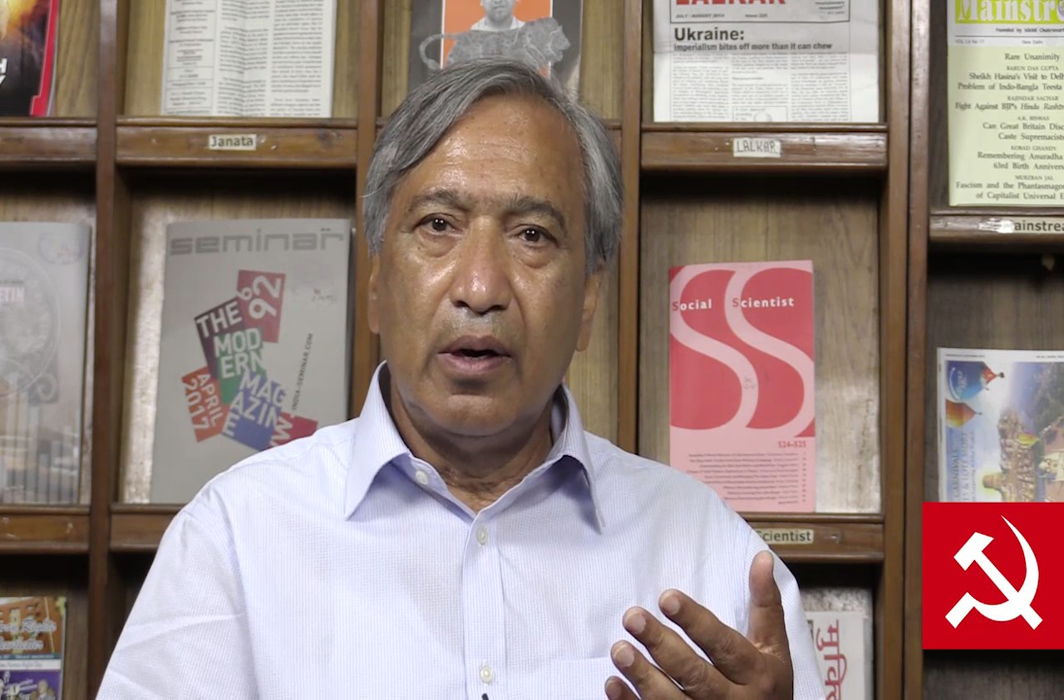 In the first press conference by a leader after facing detention Kashmir following the revocation of Jammu and Kashmir’s special status and its bifurcation into two union territories, CPI(M) leader Mohammed Yusuf Tarigami rebutted Modi government’s claims of normalcy in J&K and questioned its decision to invoke the Public Safety Act (PSA) against former J&K chief minister Farooq Abdullah.

Tarigami, who is in Delhi for treatment, was talking reporters at a press conference with CPI(M) general secretary Sitaram Yechury today (Tuesday, Sep 17).

Addressing a press conference in New Delhi, Tarigami, who was put under house arrest for a month when the Centre scrapped special status to Jammu and Kashmir, said, “They claim nobody has died, people are slowly dying, they feel suffocated. We want to live too, we should be given the chance too.”

Tarigami said that the BJP claims that not a single bullet has been fired and no one has been killed but the Centre’s security measures in J&K are slowly “suffocating” the people. “Truth is that the Kashmiris are dying a slow death. Hum bhi jeena chate hai, ek Kashmiri, ek Hindustani bol raha hai yahan. Yeh meri appeal hai, hamari bhi sune (we also want to live, a Kashmiri, a Hindustani is saying this. This is my appeal, please listen to us too),” Tarigami said.

Referring to octogenarian National Conference leader Farooq Abdullah’s detention under the draconian Public Safety Act (PSA), Tarigami said, “I am not a foreigner nor Farooq Abdullah and other leaders are terrorists. The situation in Kashmir is bad not because of the people of Kashmir but because of all of us politicians and politics.”

For over 40 days, Srinagar has had no internet or medical facilities, Tarigami said.

“Shops aren’t open, schools aren’t open. There has been no public transport… For more than 40 days, people have been unable to do any work to earn anything. Large section of people work daily and earn, their families live on that basis. The communication breakdown is isolating people,” he said.

“Main issue is of people’s livelihood. It’s been 40 days that normal life has been disrupted. And no one knows how long it will continue,” Sitaram Yechury said.

Sitaram Yechury said Mohammad Yousuf Tarigami would approach the Supreme Court on behalf of the party challenging the dilution of Article 370 and bifurcation of Jammu and Kashmir.

“In my affidavit (to the Supreme Court) I have stated that the situation in Kashmir is completely contradictory and not what the government is claiming… The manner in which this happened is very serious. This has to be resolved at the earliest,” said Yechury, who had filed the petition in the Supreme Court regarding medical help for Tarigami.

The CPM had also claimed Tarigami’s house arrest was “illegal” as there were no charges against him and no detention order had been issued.

He said that Kashmiris were neither forced nor compelled to join India. “We joined secular India out of our will. Today the bond that was created by the hard work of the leaders and the people of Jammu and Kashmir has been assaulted. The people of Kashmir want nothing but a chance to march with the government, a chance to debate and discuss,” Tarigami further said.

“Please listen to us. You have heard only one version, listen to people of Kashmir too. We don’t want to be killed or destroyed,” he added.

The ailing CPI(M) leader had been brought from Srinagar to AIIMS in New Delhi following Supreme Court order on September 5 on a habeas corpus petition filed by Yechury, who was allowed to travel to Srinagar to visit the ailing leader last month. Yechury had filed a report, as directed by the Court, on his visit to the state.

On Monday, the Supreme Court said Tarigami was free to return to his house in Srinagar. A three-judge bench, headed by Chief Justice of India Ranjan Gogoi and comprising justices SA Bobde and SA Nazeer, said the ex-MLA does not need any permission to return home if doctors at AIIMS considered him fit enough to do so.

The order however clarifies that “if he intends to move around any part of Srinagar, where there are restrictions or prohibitions to move, he will be free to do so subject to requisite permission from the district authorities”.