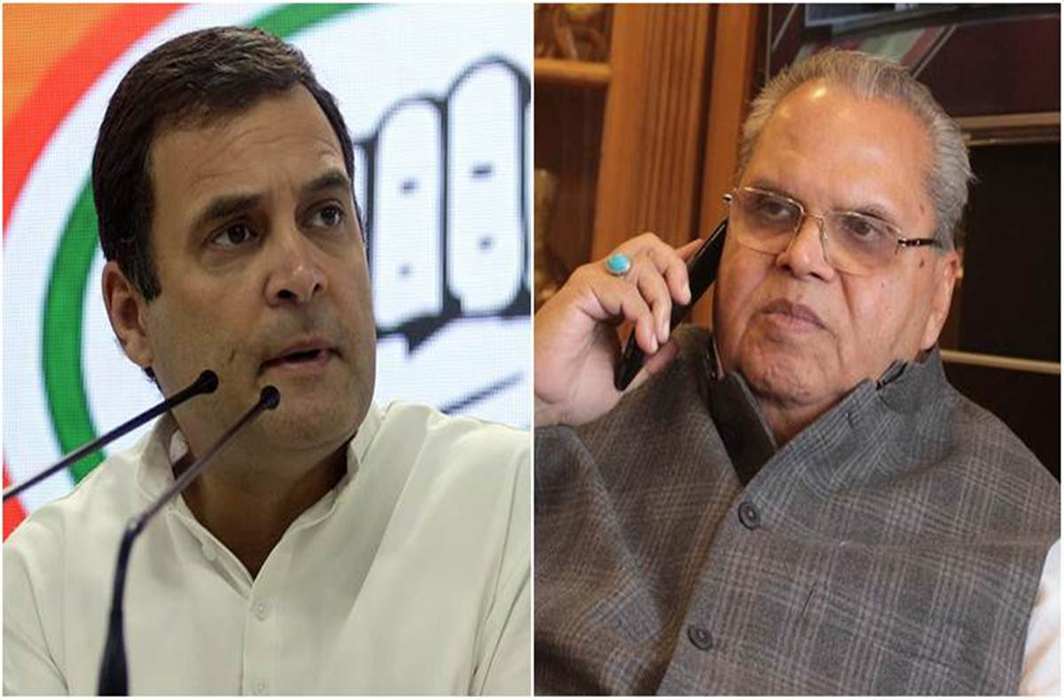 A day after Jammu and Kashmir governor Satya Pal Malik, reacting to Rahul Gandhi mentioning reports of violence in Kashmir, said he will send Rahul Gandhi an aircraft to visit the valley and observe the ground situation, the Congress leader today (Tuesday, August 13) accepted the invite.

However, taking a dig at Malik’s “gracious invitation”, Rahul said he did not need a plane but the freedom to travel and meet people, leaders and soldiers there.

“Dear Governor Malik, a delegation of opposition leaders and I will take you up on your gracious invitation to visit J&K and Ladakh,” Rahul Gandhi said in a tweet. “We won’t need an aircraft but please ensure us the freedom to travel and meet the people, mainstream leaders and our soldiers stationed over there.”

Another Congress MP, Shashi Tharoor, said to the Governor’s invite: “Why only @RahulGandhi, Governor Sahib? On behalf of Congress, I had asked in Lok Sabha for an all-party delegation to be invited to J&K to see the #Kashmir situation for ourselves! Do arrange such a trip instead of grandstanding.”

On Monday, the J&K governor had hit out at Rahul Gandhi for his remarks that there have been reports of violence in Kashmir. He had said Rahul Gandhi should feel ashamed about the behaviour of one of his leaders who was talking like an “idiot” in Parliament.

“I have invited Rahul Gandhi to come here. I will send you a plane, to observe (the situation) and then speak up. You are a responsible person and you should not speak like this,” Malik had said. He was replying to a question about statements and reports by some leaders and the media about the violence in Kashmir.

Gandhi’s sarcastic remark for freedom to travel comes against the backdrop of the Jammu and Kashmir government turning back several opposition leaders from the Srinagar airport, including the Congress’ Ghulam Nabi Azad and prominent Left leaders Sitaram Yechury and D Raja.

Leaders of the two mainstream regional parties, Omar Abdullah of the National Conference and Mehbooba Mufti of the Peoples Democratic Party are among the scores of political leaders detained to forestall protests and rallies.

Discontent has simmered in Kashmir since the early hours of August 5, when phone and Internet lines were suspended and restrictions on movement and assembly of people clamped. Since the clampdown, rumours and standalone accounts of violence and retaliation by security forces have swirled in the Valley but almost all of them have been denied by the government.

In a statement, the Union home ministry on Monday admitted to “isolated stone pelting incidents” but added that they were “insignificant”.

“In Srinagar, keeping in view the possibility of terrorists, militants and mischievous elements trying to disturb public order and peace, reasonable restrictions were imposed on large gatherings in sensitive areas,” the ministry added.

Home Minister Amit Shah had defended the restrictions imposed in Jammu and Kashmir during the debate on the passage of the two laws, underlining that these had been placed as a preventive measure so that there was no loss of lives as against the past when such measures were only taken after people died.

While the Centre is monitoring the situation directly, a News18 report quoted top Union government officials as saying that the decision on whether to allow the Congress leader and other political figures will be taken by the local district administration.

They said that the permission for political leaders to visit Kashmir or meet detained leaders such as Omar Abudllah, Mehbooba Mufti and Farooq Abdullah may not come just yet.

Government officials also said that the decision to relax movement and communication restrictions will be taken by the local administration and not by Delhi.

“It is a trade-off between peddling fake news and spreading rumours and inconvenience,” said the officer when asked for how long will the Valley’s residents be inconvenienced by the restrictions, especially where communication clampdown is concerned.

Meanwhile, state government spokesperson and Principal Secretary Rohit Kansas told reporters that restrictions will be “relaxed in a phased manner”.