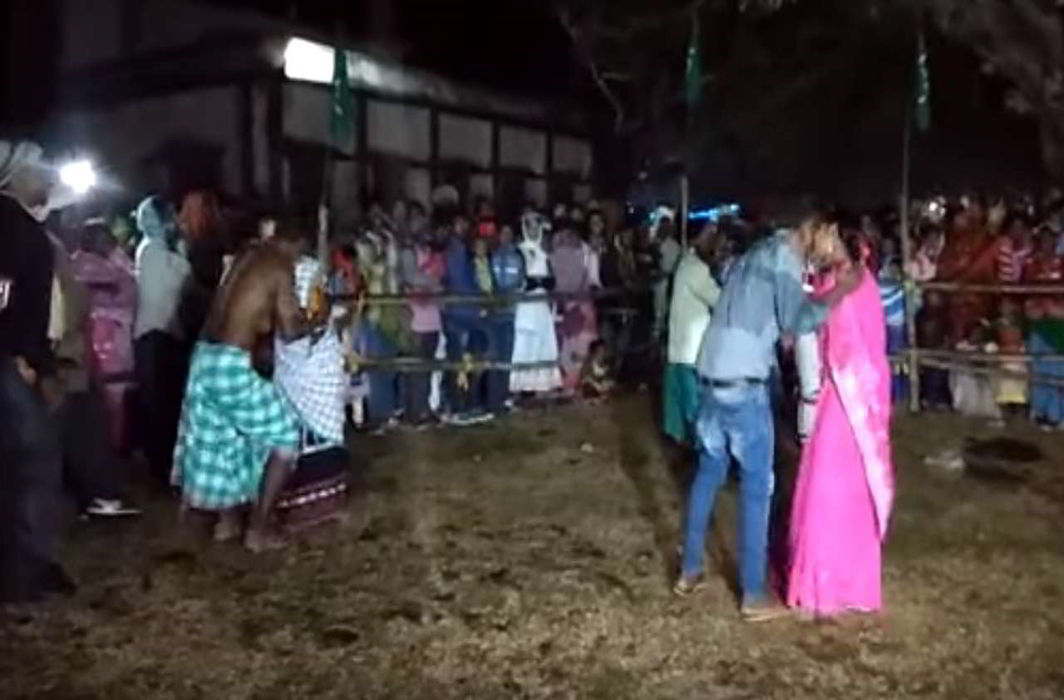 An annual tribal fair, named ‘prem ka chumban’ or ‘kiss of love’ according to reports quoting the local legislator Simon Marandi, is in the eye of a controversy over a ‘kissing competition’ held at the event on Dec 9.

The state BJP has criticised Marandi, who attended the program, for trivialising tribal culture. Marandi is from Jharkhand Mukti Morcha (JMM). Another JMM MLA Stephen Marandi also attended the fair.

Leading the BJP attack was Hemlal Murmu, also a tribal like Marandi and the state BJP president.

The fair, Dumaria Mela, which Marandi has reportedly been organising for over 35 years, was held in Talapahari village of Littipara Assembly constituency, where Marandi was elected the MLA in the bypoll in April this year.

One of the “events” in the fair was the “kissing competition” in which couples were asked to kiss each other in public. Around 20-odd couples participated.

Marandi’s said he did not understand what the hullabaloo was all about. “This fair has been held for a long time and several competitions are organised. Since it was a local affair, I had to attend it,” he told The Indian Express.

Marandi said this was just to prevent married couples from seeking divorce. “It is not about making people modern as such, because tribals have their own lifestyle. But it is also true that there is a growing trend among tribals of divorcing their spouses. Men and women, both leave their current spouses to marry somebody else. This leads to families breaking up. This event was intended to make love blossom between the couples. In fact, the name of the fair in Santhali language literally means “kiss of love (prem ka chumban),” Marandi told IE.

Asked about the BJP, Marandi said: “I don’t know what they are saying. In any case, do the BJP people know the realities of the village? Do they even visit one?”

Murmu contested this. Addressing a press conference, he said that the event amounted to trivialising tribal culture. “In Santhal traditions, the girl and boy do not even shake hands. Kissing is something way too far. Santhal tradition never had such a thing. Also, this fair is being organised in the name of Siddo, Kanu (tribal icons) and the Hul revolt, which they led. But at this time, it is neither the birth anniversary of these brave leaders nor of the Hul revolt. This is humiliation of the female power,” he was reported as saying.

“JMM’s Christian legislators are trying to destroy Santhal’s rich tribal culture and custom by introducing the western culture, which we protest as tribal and BJP leader,” Murmu said.

Murmu demanded that Marandi should not be allowed to attend the Assembly session that starts from Tuesday.

Tribal groups were also reported to have lodged a protest against the incident. “Men and women from our community participate together in festivals and dancing events. But, the kissing contest has never been part of our culture. It is very disappointing,” religious leader of the Sarnas Bandhan Tigga said, according to a Hindustan Times (HT) report.

“It’s a serious issue and these leaders should immediately seek a public apology from respective tribal village heads. They have no business except to lure people into alcoholism and immoral fun and frolic,” Hemlal Murmu told HT.