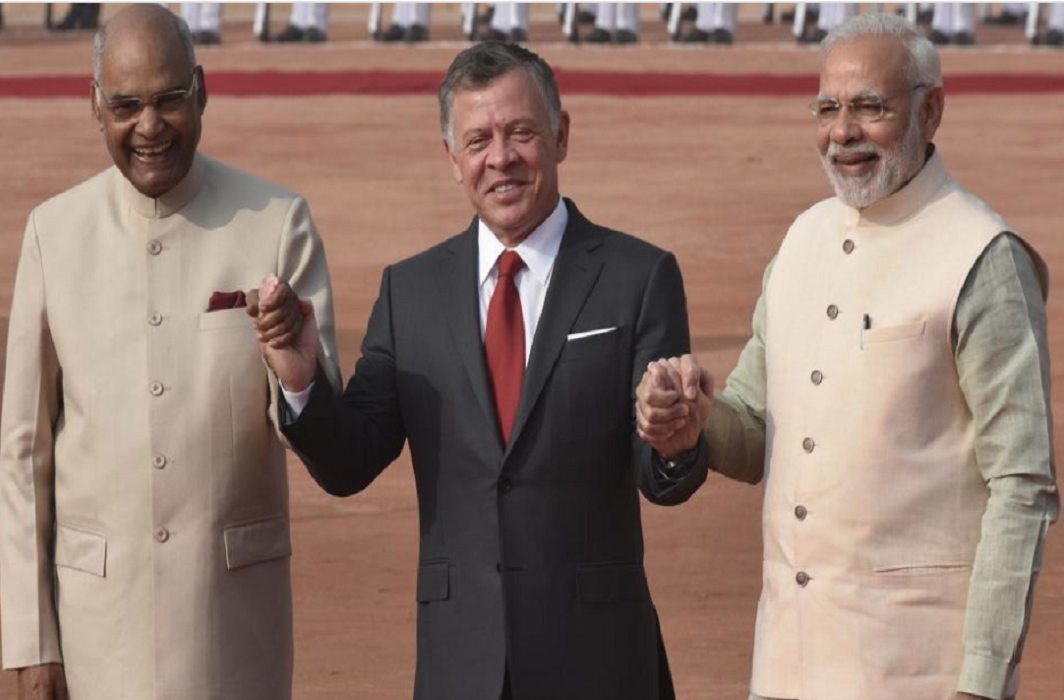 Jordanian King is on a three-day official visit to India. He arrived on Tuesday evening and visited IIT Delhi and addressed business leaders on Wednesday. He was officially received at Rashtrapati Bhavan on Thursday morning.  Later the visiting dignitary aid wreath at Gandhi Samadhi, addressed a conference  on “Islamic Heritage: Promoting Understanding and Moderation” before his meeting with PM Narendra Modi.

The two leaders also witnessed the signing of 12 MoUs and agreements for strengthening cooperation in different areas, including  Defence cooperation, visa waiver for diplomatic and official passport holders, setting up of the next generation Centre of Excellence in Jordan, Customs Mutual Agreement, a twinning agreement between archaeological sites in Agra and Petra (Jordan), cooperation between Indian Institute of Mass Communication (IIMC) and Jordan Media Institute (JMI),  and MoU between Prasar Bharti and Jordan TV.

Earlier in the day, Prime Minister Narendra Modi emphasised on the Sufi-syncretic values of Islam while addressing Muslim elite at Vigyan Bhavan. He said that the fight against terrorism and radicalisation was not against any religion, but against a mindset that misguides the young.

Reinvigorating traditionally close and cordial ties! PM @narendramodi warmly welcomes His Majesty @KingAbdullahII Ibn Al Hussein, King of the Hashemite Kingdom of Jordan at the Hyderabad House ahead of the bilateral talks. pic.twitter.com/WuXPQILwmm

He was addressing ‘Islamic Heritage: Promoting Understanding and Moderation’ conference in the presence of King Abdullah II. He said, “Muslim youth in India had the Quran in one hand and a computer in the other. Youth are radicalized and violence is inflicted on the innocent. Together, we can fight terrorism.”

King Abdullah II is known for his initiatives to fight radicalisation and terrorism in the name of religion and is also custodian of the Al-Aqsa mosque, the third holiest site in Islam, located in Jerusalem. Speaking at the event, King Abdullah II said, “Ideologies of hate distort the word of God. Faith is supposed to draw humanity together.”

“… Let’s get things done and, please, do not be bashful with our ministers here. Tell them exactly what you think and what you need, and we will follow up to make sure that happens,” His Majesty told an audience of more than 300 businesspeople, investors and company representatives from the two countries.