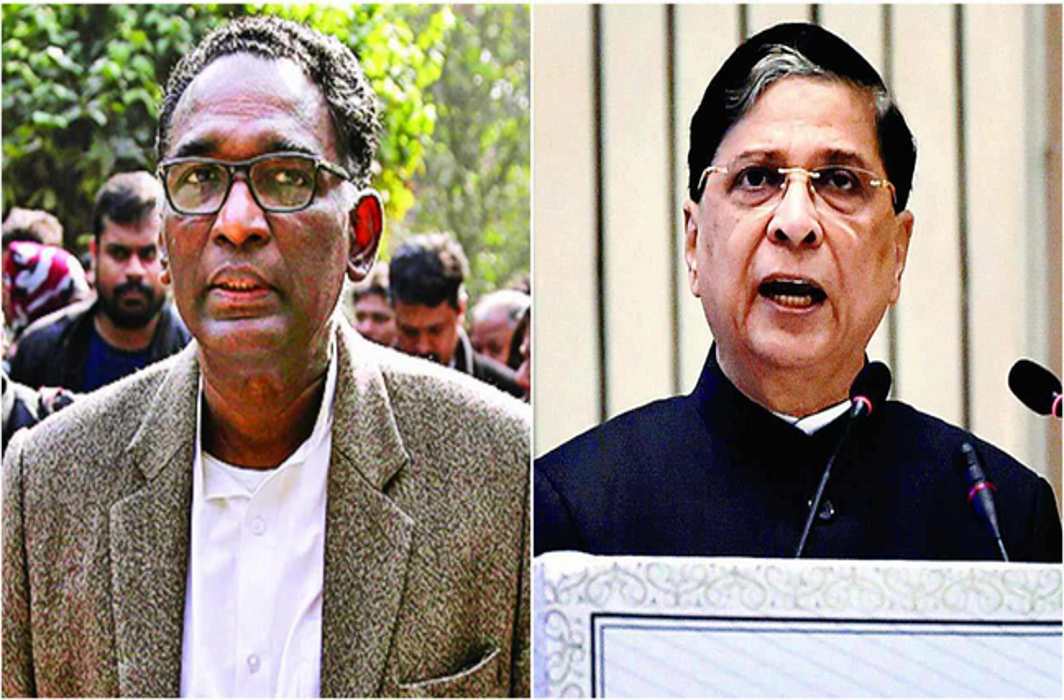 A Supreme Court Bench led by Justice Jasti Chelameswar on Thursday, April 12, turned down an urgent mentioning to list for hearing a petition seeking clarification on the role of Chief Justice of India (CJI) as ‘master of the roster’ and specify that the CJI’s authority as such should not be reduced to an absolute, singular and arbitrary power.

This comes a day after a bench headed by Chief Justice Dipak Misra ruled that constitution of benches of the top court allocation of cases is exclusive prerogative of the CJI.

Justice Chelameswar – the senior-most judge after the Chief Justice – refused to hear the PIL filed on behalf of former Union minister Shanti Bhushan, commenting: “There is nothing much I can do in this. I am sorry. You please understand my difficulty… With two months left, I don’t want to hear that I am trying to grab some office. I do not want another reversal of my order in 24 hours. This is why I can’t do it. Let the nation decide its own course.”

Justice Chelameswar was referring to his earlier order which was quashed on November 10, 2017 by a Constitution Bench headed by CJI in the Campaign for Judicial Accountability and Reforms (CJAR) case.

Justice Chelameswar, who has been critical of Chief Justice Dipak Misra’s handling of the roster and had, along with three other senior judges, held an unprecedented press conference to slam CJI’s allocation of important cases to benches headed by junior judges, said that reasons for him not hearing Shanti Bhushan’s petition were “too obvious”.

A report by news agency PTI quoted Justice Chelameswar as saying: “someone is running a relentless tirade against me that I am up to grab something (sic)… Please understand my difficulty.”

The former law minister’s son and advocate Prashant Bhushan, however, persisted with the request to have the petition heard, claiming that the plea had been filed 10 days ago but the Supreme Court registry was yet to list it before a bench.

A report in The Hindu said that it was then that Justice Chelameswar’s puisne judge, Justice Sanjay Kishan Kaul, to say that retirement is looming for his senior brother judge and Justice Chelameswar should be spared from being dragged into controversy.

Prashant Bhushan was then forced to move to the court of Chief Justice Dipak Misra with his request to have his father’s petition heard. It may be recalled that while filing the PIL, the Bhushans had urged the Supreme Court registry to not list the plea before a bench headed by the Chief Justice.

In Court No. 1, as Prashant Bhushan urged the judges to list the petition for hearing, Justice DY Chandrachud asked: “have the defects (in the petition) been removed?” With Prashant Bhushan replying in the affirmative and adding that he had earlier urged the court of Justice Chelameswar to hear the matter but that his bench conveyed to him that “it could not do anything about it”, Chief Justice Dipak Misra said: “we will look into it.”

The petition by the Bhushans seeks a ruling by the apex court on the administrative authority of the Chief Justice in his capacity as the apex court’s master of roster and for laying down the principles and procedure to be followed while allocation of cases to various benches.

The Wednesday (April 11) verdict delivered by a bench headed by Chief Justice Dipak Misra himself against a petition filed by Allahabad-based lawyer Asok Pande ruled that constitution of benches of the top court allocation of cases is exclusive prerogative of the CJI.

Several jurists and former judges of the Supreme Court and various high courts have criticised the verdict, arguing that the CJI should have recused himself from hearing the petition filed by Pande as the petition directly concerned him.

The April 11 verdict, delivered by the bench that also comprised of Justices AM Khanwilkar and DY Chandrachud, reaffirms that the Chief Justice is “the first among equals” and “in the allocation of cases and the constitution of benches… has an exclusive prerogative.”

On the issue of how judges must be selected for various benches and to hear different kinds of cases that come before the apex court, the verdict had said: “the petitioner (Asok Pande) seems to harbour a misconception that certain categories of cases or certain courts must consist only of the senior-most in terms of appointment. Every Judge appointed to this Court under Article 124 of the Constitution is invested with the equal duty of adjudicating cases which come to the Court and are assigned by the Chief Justice. Seniority in terms of appointment has no bearing on which cases a Judge should hear… every Judge of the Court is entitled to and in fact, duty bound, to hear such cases as are assigned by the Chief Justice…”

“To suggest that any Judge would be more capable of deciding particular cases or that certain categories of cases should be assigned only to the senior-most among the Judges of the Supreme Court has no foundation in principle or precedent. To hold otherwise would be to cast a reflection on the competence and ability of other judges to deal with all cases assigned by the Chief Justice notwithstanding the fact that they have fulfilled the qualifications mandated by the Constitution for appointment to the office,” the verdict said.

—With inputs from India Legal Bureau and agencies