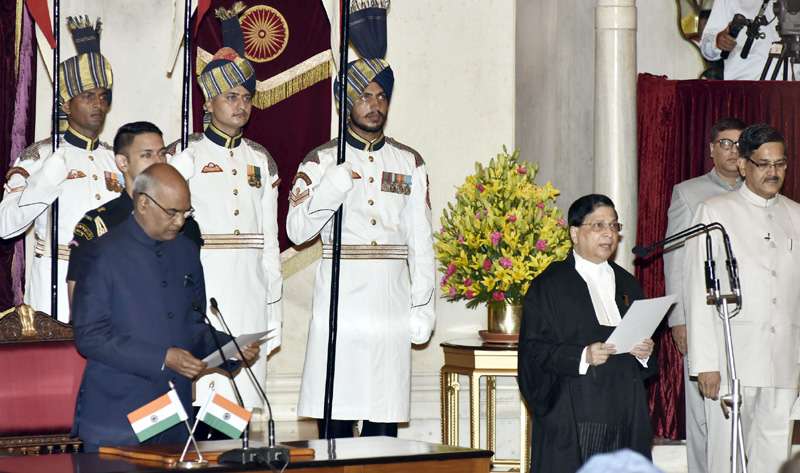 New Chief Justice will have the unenviable task of presiding over politically sensitive cases like the Babri Masjid-Ram Janmbhoomi land dispute, repealing Article 35A in Kashmir, among others

Justice Dipak Misra was, on Monday, sworn in as the 45th Chief Justice of India by President Ram Nath Kovind, taking over the mantle from Justice JS Khehar, who retired on Sunday. The newly sworn-in CJI is scheduled to retire on October 2, 2018 after a tenure that will last for 13 months and six days.

Justice Misra was appointed as a judge of the Supreme Court on October 10, 2011 and in the past six years has delivered several crucial judgments – those that were hailed as landmark verdicts and yet others that were criticised by legal experts for bordering on judicial over-reach.

Among the most defining moments of his stint as a judge of the apex court, perhaps came on the intervening night of July 29-30, 2015 when as part of a three-judge Bench, which also included then Chief Justice of India, HL Dattu, he dismissed the mercy petition of Yakub Memon, convicted in the Bombay blasts case. For the first time in the history of independent India, the Supreme Court had held a midnight hearing, discussing the arguments made in the case for nearly 90 minutes before reading out its verdict at 3 am. Memon was hanged at 3 am on July 30, 2015, amidst criticism and applause of the Supreme Court in equal measure.

A judgment passed on November 30, 2016 by a Bench headed by Justice Misra, however triggered a debate over whether an increasingly aggressive brand of nationalist fervour was stifling civil liberties. The verdict gave sanction for playing of the national anthem in cinema halls before the screening of a film began and made it mandatory for everyone present in the audience to stand up while the anthem was being played. In the days following the verdict, while a handicapped person, who could not stand up during the playing of the national anthem in a cinema hall, was severely heckled several similar reports of people being harassed by right-wing lumpens at movie theatres across the country collectively added to the narrative that whether the Supreme Court had erred in its verdict. A few months after the verdict, the Centre had informed the apex court that handicapped people who cannot stand when the anthem is played should be exempted from doing so.

On May 3, 2016, Justice Misra upheld the constitutional validity of the legal provision related to criminal defamation. Justices Misra and PC Pant had held that the reputation of an individual was an equally important right and stood on the same pedestal as free speech. The court said it would be a stretch to say that upholding criminal defamation in modern times would amount to imposition of silence. A section of the legal fraternity and advocates of free speech had termed the verdict as being regressive.

Then, on May 5, 2017, a bench headed by Justice Misra had upheld the execution of the three convicts in the highly publicised Nirbhaya gang rape case.

Just as verdicts passed by him or a bench that he was part of faced scrutiny by legal eagles, Justice Misra’s elevation as the CJI too had become a matter of some debate over the past few weeks. In July this year, Adish C. Aggarwala, president of the International Council of Jurists, had alleged that Justice Misra’s appointment as the CJI would “severely compromise the independence of the judiciary”. Aggarwala had written to then CJI Khehar – who had named Justice Misra as his successor – asking that an ongoing enquiry into allegations that Justice Misra had misrepresented facts in attempting to get hold of public land meant to be distributed to the landless poor for agricultural purposes in Odisha must first be resolved before he takes over India’s highest judicial post.

Aggarwala had raked up allegations made by an Odisha-based activist, Jayanta Kumar Das, who had claimed that back in 1979, when Justice Misra had not joined the judiciary but was a practicing lawyer, he had applied for allotment of the land to develop a fodder farm. While in his application to the Odisha government he had declared that his family owned 10 acres of land, Das had alleged that none of the said land was actually in Justice Misra’s name and that he had allegedly concealed this information in a subsequent affidavit. The affidavit later became the basis for allotment of two acres of land to Justice Misra.

The suicide note of former Arunachal Pradesh chief minister Kalikho Pul too had reportedly made some serious allegations against Justice Misra, which went uninvestigated.

However, these allegations notwithstanding, outgoing Chief Justice Khehar and the Narendra Modi government still went ahead with the appointment of Justice Misra as the CJI, sticking to the seniority rule.

On his hands, the new Chief Justice will have some critical cases to deal with. He might preside over the contentious Babri Masjid demolition case and also deal with the much popular BCCI reforms matter, as well as the Sahara SEBI case. The explosive issue of abrogation of Article 35A in Kashmir is also expected to be heard by the new Chief Justice.

Adding to the challenges he is certain to face is the seemingly perpetual problem of filling up vacancies in High Courts and the Supreme Court. High Courts in India are working with just 56% of their sanctioned strength while the shortfall in the Supreme Court will widen to 6 when Justice PC Pant retires on Tuesday, leaving only 25 judges in the apex court. The contentious MOP (Memorandum of Procedure) continues to remain an unresolved issue between the government and the SC collegiums, which has rejected the idea of including a security clearance clause that would allow the executive to veto superior court appointments in case of a negative remark against a proposed candidate.