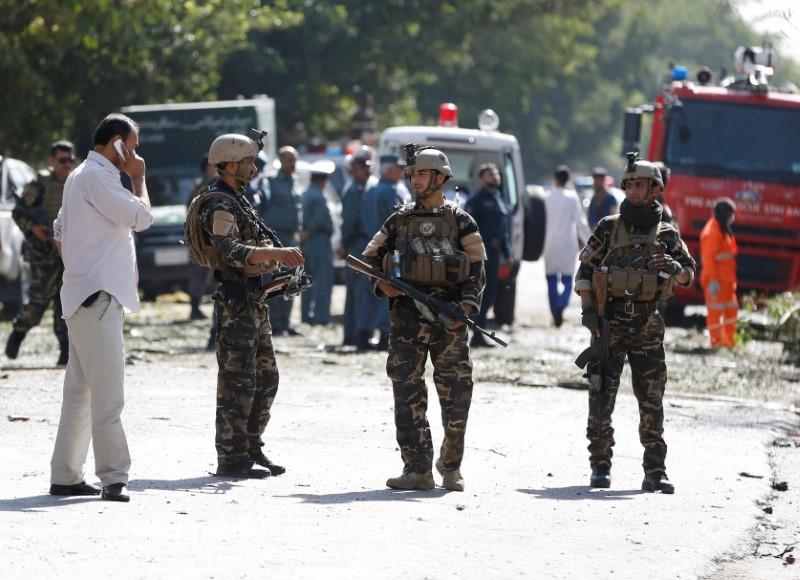 Nearly two dozen people – including several staffers of Afghanistan’s Ministry of Mines and Petroleum – were killed and over 40 injured in a suicide explosion that rocked Kabul during the morning rush hour, on Monday.

Preliminary reports suggest that a suicide car bomb targeted a bus carrying ministry staff. The Taliban issued a statement shortly after the attacks claiming responsibility for the act of terror. According to Reuters, Taliban spokesman Zabihullah Mujahid claimed in a statement that 37 “intelligence workers” had been killed in the attack.

Both buses were destroyed by powerful explosion, killing 37 intelligence workers.

NOTE: These buses were under surveillance for 2 months

The explosion took place at 7 am, in Kabul’s Dehbori neighborhood, which is home to a large Shia Hazara population – one of Afghanistan’s largest ethnic minorities. The blast site is also close to the residence of Mohammad Mohaqiq, a prominent Afghan politician and deputy government Chief Executive.


Najib Danish, an acting Interior Ministry spokesman said that the death toll could rise as, “The car bomb hit a bus carrying employees of the ministry of mines during rush hour”.

The bus was completely destroyed, along with three other cars and several shops in the area, said Basir Mujahed, chief spokesperson of the Kabul police, while adding that children were among those wounded. “The bomber attacked at one of the busiest times of the day…There were traffic jams en route as people were going to work, schools and the university. Many shops in the locality had just opened,” Mujahed added.

The attack struck Kabul’s Dehbori neighborhood which, along with other parts of Afghanistan’s national capital, was to witness a peaceful demonstration later in the day to commemorate the first anniversary of a suicide bombing that killed 84 people in the same area on July 23 last year and left over 300 wounded.

The July 23 bombing last year had been carried out by the Islamic State of Iraq and the Levant (ISIL, also known as ISIS) and was its first major strike in Afghanistan. The terror outfit has since last year carried out several other devastating attacks across the country that is already ravaged by the excesses of the Taliban and other local warlords.

According to Al Jazeera, Monday’s suicide bombing “adds to the unrelenting violence in Afghanistan, where at least 1,662 civilians have been killed” in just the first half of 2017. A recent UN report too had showed that attacks in Kabul alone have accounted for nearly one-fifth of all civilian Afghan casualties this year.

Earlier on May 31, a major explosion in the Vazir Akbar Khan neighborhood had killed around 150 people. The attack was said to be the deadliest that the country has witnessed since the US led forces ousted the Taliban government in 2001. The neighborhood houses crucial diplomatic missions including those of US, Russia, France and India.

Taliban which is battling the Western backed government and a NATO-led coalition for control of Afghanistan, has launched a wave of attacks around the country in recent days.