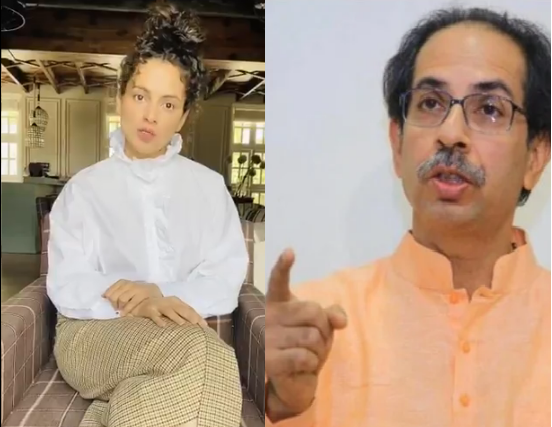 Bollywood actor Kangana Ranaut in a series of tweets on Monday hit back at Maharashtra Chief Minister Uddhav Thackeray, who criticised the actor and her home state Himachal Pradesh at the annual Dussehra rally.

On Sunday, Thackeray addressed the annual Dussehra rally of the Shiv Sena party where he referred to Ranaut’s infamous tweet without mentioning her name. He said people who have no means of livelihood come to Mumbai and earn their bread and butter here, abuse the city by terming it as Pakistan occupied Kashmir (PoK). If someone feels Mumbai is PoK, then unfortunately it is Prime Minister Narendra Modi’s failure, not us, said the Shiv Sena chief.

There are drugs everywhere and people are trying to malign the image of the city by calling it a hub of drugs, he said referring to Ranaut’s statement over late actor Sushant Singh Rajput’s drug probe case, which claimed Mumbai is the city of drugs. Thackeray said ganja fields are in your state, not in our Maharashtra, further pointing at the actor’s home state Himachal Pradesh.

On Monday morning, Ranaut took to Twitter and responded to Thackeray. She called the chief minister the worst product of nepotism. The Shiv Sena leaders Sanjay Raut and Thackeray abused me, and claimed that I won’t get food and shelter in my state. I am your son’s age, this how you speak to a self made single woman, tweeted Ranaut.

She said she is not drunk on her father’s power and wealth like Thackeray. If she wanted to be a nepotism product, she could have stayed in Himachal since she hails from a renowned family, the actor said.

Ranaut attacked Thackeray for having a vengeful, myopic and ill-informed view about Himachal Pradesh. She said just how beautiful Himachal belongs to every Indian, similarly the opportunities offered by Mumbai belong to her. She warned the chief minister to not snatch the democratic rights.

The chief minister should be ashamed of being a public servant as he indulges in petty fights, uses power to insult, damage and humiliate people. He doesn’t deserve the chair he has acquired by playing dirty politics, said Ranaut adding that his filthy speeches are a vulgar display of incompetence.

Calling the chief minister a petty person, she questioned the audacity of Thackeray. She said he is just a public servant, why is he behaving like he owns the state. When he will be out, someone else will come in his place to serve the state, she said.

Meanwhile, a complaint has been filed against Ranaut at a Mumbai court for spreading hate, breaking brotherhood, integrity of the country through her provoking hate speeches given by her. The complaints include several of her tweets in which she had targeted politicians, Maharashtra police, and Bollywood personalities from the film industry. The metropolitan magistrate 65th court of Mumbai has set November 10 as the next date of the hearing in the matter.