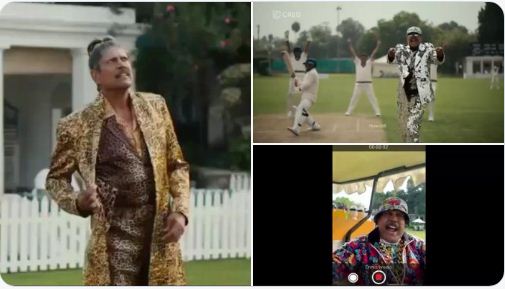 The 1983 World cup-winning captain Kapil Dev has taken the internet by storm, the former skipper has featured in an ad for CRED (a credit card management app). The advertisement starring cricket legend Kapil Dev shows him making some radical fashion choices inspired by Bollywood actor Ranveer Singh, who is playing Dev’s role in the upcoming sports film ‘83’. Dev can be seen in many avatars in the advertisement, imitating Ranveer.

Fans on the internet are saying that Kapil Dev is returning the favour to Ranveer, after Ranveer played the role of Dev in his upcoming film ‘83’. From a light pink cricket jersey to quirky sunglasses, Kapil can be seen going berserk channelling his inner Ranveer Singh

Kapil Dev shared the ad on his Twitter with the caption, “Heads, I’m fashionable. Tails, I’m still fashionable” and we love the cricket pun. Minutes after Dev posted the video, tweeples couldn’t resist themselves and shared some hilarious memes.

Here are some of the popular picks: