Kapil Dev praises Jasprit Bumrah for breaking his own record 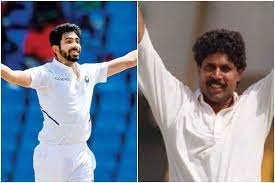 India legend Kapil Dev is all praise for Jasprit Bumrah for breaking his own record of becoming the fastest pacer to reach 100 Test wickets for India.

Bumrah broke the record during the fourth Test match against England when he dismissed England’s Ollie Pope on the final day of the match at the Oval. He achieved this feat in 24 Test matches at the age of 27 years. Kapil Dev had achieved the feat in his 25th Test and was 21 when he achieved this feat against Pakistan at Eden Gardens in 1980.

Kapil Dev, India’s first World Cup winning captain, appreciated Bumrah’s achievement and called it sensational, more so because of the conditions he bowled in. Dev said Indian pitches are becoming favourable for fast bowlers which is why so many quality fast bowlers are emerging from India. He also admitted that when Bumrah started to play Test cricket, he was not expecting Bumrah to be as good as he was in ODIs and T20Is.

Bumrah made his Test debut in 2018 against South Africa in 2018. In a three Test match series Bumrah had a remarkable debut as he managed to pick 14 wickets in 6 innings with an average of 25.21 and was the 2nd top wicket taker for India.

Dev said that Bumrah can be titled the world’s best bowler right now given his form and achievement.

In August 2019, Bumrah became the quickest Indian bowler to pick 50 Test wickets and only third bowler from India to grab a Test hat-trick after Harbhajan Singh and Irfan Pathan.

Bumrah was the leading wicket taker for India in the England-India Test series, scalping 18 wickets in 8 innings. He will now be seen in action when the IPL 2021 resumes with his team Mumbai Indians taking on Chennai Super Kings on September 19.

Kapil Dev won India’s first ever World Cup in 1983 and was the leading wicket-taker in Tests when he retired in 1994 with 434 wickets to his name.