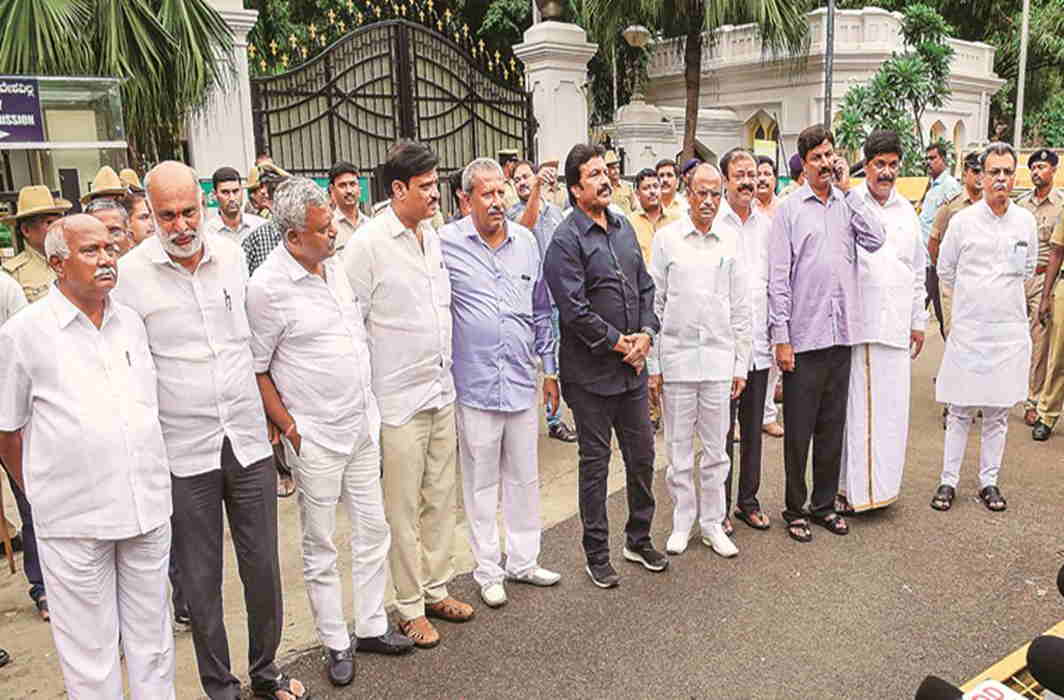 Teetering on the edge after resignation of 14 MLAs – the latest a minister and independent MLA who openly came out in support of BJP – the coalition government in Karnataka is set for a cabinet reshuffle as part of a last ditch effort to save it.

The pave the way for this, Congress and Janata Dal (Secular) ministers in HD Kumaraswamy’s government sent in their resignations today (Monday, July 8).

“All ministers from JDS have submitted their resignations just like the 21 ministers from Congress,” the Karnataka Chief Minister’s office tweeted on Monday, announcing that a “cabinet reshuffle will happen soon”.

The announcement by Chief Minister Kumaraswamy’s office came hours after the Congress asked its 21 ministers to step down to make space in his new council of ministers for the dozen-odd rebel legislators who have sent in their resignation letters.

Chief Minister HD Kumaraswamy, who cut short a private visit to the US and returned last evening to handle the crisis, said Congress and JDS minsters have resigned to make room for rebels who might be persuaded to return.

KC Venugopal, the senior Congress leader sent from Delhi to see if the coalition government can survive its biggest crisis, said the ministers had resigned voluntarily. “I sincerely thank the ministers for their sacrifice for defeating the anti-democratic attitude of BJP. We believe in the MLAs and we are ready to discuss everything. Those who resigned should come back and strengthen their own party,” he said.

Targetting the Opposition BJP, former chief minister and chairman of reconciliation committee Siddaramaiah said, “The BJP is trying to overthrow the government through anti-constitutional measures. The BJP, which has no respect for democracy, is a disgrace to the country. The BJP is constantly trying to break up a constitutionally constituted government with a mandate.”

Siddaramaiah, who called Amit Shah and Narendra Modi “dictator”, accused them of exploiting central institutions to intimidate the Congress and JD(S) legislators. “This is the sixth attempt of the BJP to topple the coalition government in the last one year,” Siddaramaiah said, adding that he was sure that the BJP would fail again.

Siddaramaiah added that the rebel MLAs, who were unhappy that they did not get a berth in the year-old Kumaraswamy, would be accommodated. “Reshuffle means a total reshuffle,” he told reporters.

Many of the rebel MLAs have insisted that they didn’t quit because they were left out of Kumaraswamy’s cabinet but had their own reasons.

For instance, Independent MLA H Nagesh, who switched sides from the ruling coalition to the BJP on Monday, had been inducted to the cabinet just last month. The Congress’ calculation appears to be that if the lure of a cabinet berth can convince just some of the MLAs to withdraw their resignation letters, the Kumaraswamy government would continue to stay above the majority-mark when the July 12 budget session of the state assembly begins.

Meanwhile, Nagesh has left for Mumbai, which has become the base of the rebels. The lawmakers who resigned on Saturday – eight from the Congress and three from the JDS – were taken to a five-star hotel in Mumbai the same day.

There are reports of two more exits, including that of Congress’s Soumya Reddy, daughter of former Karnataka minister Ramalinga Reddy. The JDS has moved all its lawmakers to a resort. Media reports said the party has booked 35 rooms in Paddington Resort in Kodagu for tonight.

The Congress, which accused the BJP of herding the rebels to a hotel in Mumbai, alleged that Nagesh has been kidnapped. “Just now Nagesh called me and said that he has been hijacked by Yeddyurappas’ personal attendant and the BJP. By the time I reached airport the flight had left,” Congress troubleshooter DK Shivakumar was quoted as saying by news agency ANI.

The BJP has denied any role in the crisis but sources say it is getting ready to strike. “We are not sanyasis (hermits),” its leader BS Yeddyurappa has said.

While BJP denies having a hand in the affair, The Hindu reported that rebel Congress-JD(S) MLAs holed up at Sofitel hotel in Mumbai under the watch of State BJP leaders since Saturday.

It quoted a BJP leader assigned with the task of monitoring the MLAs, as saying, “We have 14 Congress and JD(S) MLAs with us in Mumbai. They were brought to Sofitel on Saturday night and will be here for at least two-three days.”

The coalition was pushed to the brink on Saturday after 13 Congress and JD(S) MLAs submitted their resignations to bring its number to 105, on par with the BJP, in the 224-member Assembly even as several other rebels are reported to be waiting to exit. The resignations of the 13 MLAs, at least 10 of whom have moved to a Mumbai hotel, are yet to be accepted by the Speaker.

If the resignations of the MLAs are accepted by the Speaker, the coalition’s tally will be reduced to 104. The Speaker also has a vote. The BJP has 105 MLAs in the House.

At present, pending acceptance of resignations of MLAs, the JD(S)-Congress coalition’s total strength after Nagesh withdrawing his support, stood at 117 (Congress-78, JD(S)-37, BSP-1 and Independents-1), besides the Speaker. The half-way mark is 113.

If the resignations stand, the Congress-JDS coalition’s 118 members in the 224-seat state assembly will come down to 104 and the majority mark will drop from 113 to 106. The BJP, with the support of Nagesh, has 106 members.

Speaker Ramesh Kumar, who was not in office when 11 lawmakers submitted resignation letters on Saturday, will examine the matter tomorrow. Congress leaders say a clear picture will emerge on July 12, when the assembly session begins.

“There is no threat to the coalition government. It is safe,” said Siddaramaiah. “@BJP4India is misusing central govt & its agencies to threaten our MLAs. It is not just by @BJP4Karnataka leaders but also by dictators @AmitShah & @narendramodi. They are nothing but the traitors of this vibrant country,” his tweet read. Senior Congress leader Mallikarjun Kharge said the party is in still in touch with the rebels.

The matter found resonance in Parliament, where Union minister Rajnath Singh denied Congress allegations about the BJP attempts to destabilise the state government. “Our party does not put pressure on any other party’s lawmaker or legislator. It is Rahul Gandhi who started the resignation spree,” Rajnath Singh said.

Congress leader Venugopal, who pinned the blame for the resignation of the ruling coalition MLAs on the BJP, said the BJP had offered money and cabinet berths to the rebels. “The country never witnessed anything like this. This is the sixth attempt to destabilise the government,” he said, insisting that the coalition was confident that the BJP will “fail terribly” at its effort too.