Trafffic was affected for about 30 to 45 minutes in and around the region. 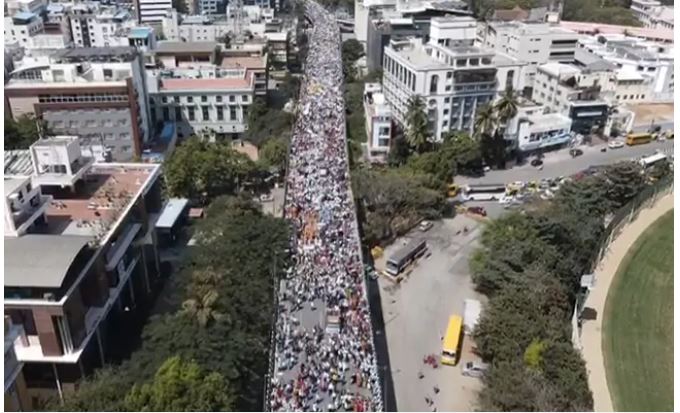 As Karnataka government has decided not to reverse its decision to impose a 30% cut on tuition fees, At least 3,000 teachers and non-teaching staff of private schools across Karnataka hit the streets on Tuesday to protest against the government’s decision to reduce the tuition fee.

The protest comes in the backdrop of a government order that directed private schools to reduce fees for the upcoming academic session. Private schools, however, have argued that they need money to pay its staff which parents contest, stating that most of the teachers have been sacked or have received pay cuts by the management.

The protesters have marched from Bengaluru’s main railway station to Freedom Park as decided by the Karnataka Private School Managements, Teaching and Non-Teaching Staff Coordination Committee (KPMTCC) on Monday. The KPMTCC consists of 11 private school associations. Those who protested in state capital Bengaluru included drivers, attendees, security staff and members of school managements.

The drone footage of the protest showed thousands of people walking in protest on a flyover in Bengaluru. Trafffic was affected for about 30 to 45 minutes in and around the region.

The majority of private schools in Karnataka have declared holiday on Tuesday as a sign of protest against the government’s educational policies. The protesters are demanding that this order on fee concession should be revoked.

The KPMTCC said in statement that the protest was against the financial distress of private education institutions, unscientific fee reduction and the imposition of a new school clause for the old schools under the Covid-19 pandemic in the name of the accreditation renewal.