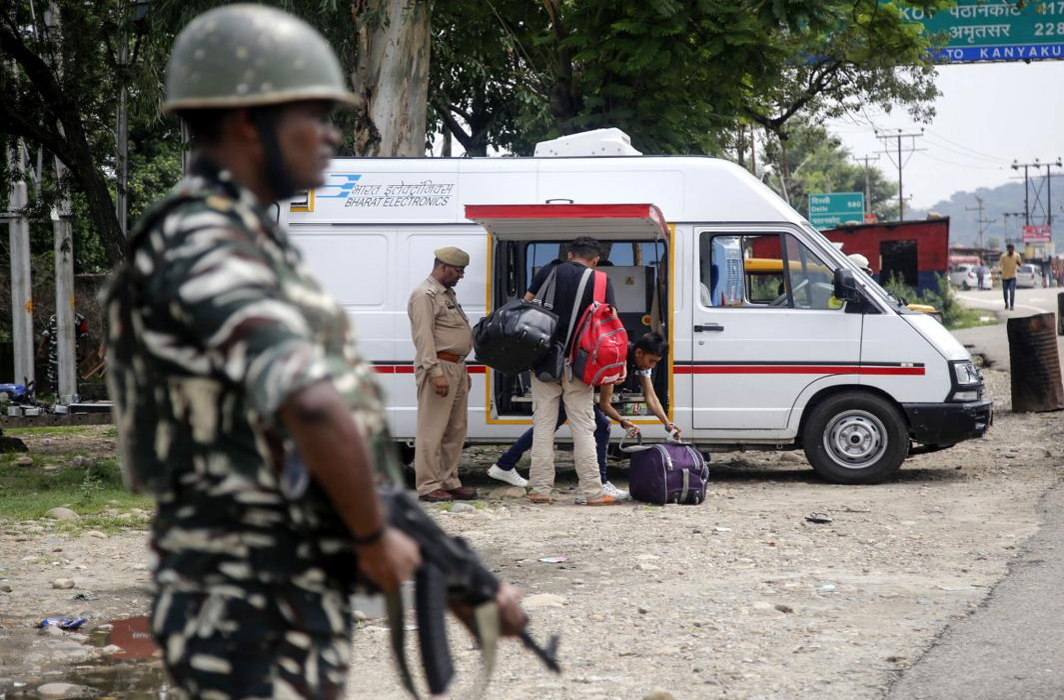 Alarm and confusion prevailed in Kashmir after an unprecedented troop build up, cancellation of Machail yatra after Amarnath yatra citing security threat and suspicion that all this was a build-up to withdrawal of special Constitutional provisions relating to Kashmir.

Kashmir is still under President’s rule – euphemism for central rule through the Governor – and statements from the government instead of allaying suspicions have had the contrary effect.

Jammu and Kashmir Governor Satya Pal Malik today (Saturday, Aug 3)  said the state had “no knowledge” of any changes to constitutional provisions. His statement came after a delegation of leaders from the National Conference, led by former chief minister Omar Abdullah, apprised him of the “panic” following the suspension of the Amarnath Yatra and subsequent order for yatris and tourists to leave.

Malik explained that there were “vulnerable” people, who did not know the area and could be targeted in a terrorist or fidayeen attack. “It is the responsibility of the state to provide security to all its citizens.”

On the sudden increase in the deployment of troops, Malik said the security situation has developed in a manner which required “immediate action”.

“There were credible inputs which were available to the security agencies regarding terrorist attacks on the Amarnath Yatra. There has been intensified shelling on the LoC by Pakistan which was responded to effectively by the Army,” the Governor said, adding that it is in this context that the government had issued an advisory asking Yatris and tourists to return as soon as possible.

Abdullah also said that the Governor had “assured” the NC delegation that there were “no preparations” on any announcement on Article 370, 35A or trifurcation of the state.

“We wanted to know about the current situation. When we ask officials, they say something is happening, but nobody knows what is actually happening,” Abdullah said in a press conference post-meeting.

Abdullah said that Malik’s words were not “final” and that he would prefer hearing them from the Centre. “The Governor isn’t the final word on J&K. The final word on J&K is the Government of India. Therefore, I definitely would like to publicly hear from the government that there is nothing people have to worry about.”

He demanded that the government make a statement during the ongoing session of Parliament on the current situation.

Machail yatra in Kishtwar’s Paddar area had started last month and it was to continue till September 5. Thousands of people from across the Jammu region visit the temple of Goddess Kaali situated at a height of 9.795 ft above sea level in Paddar area which also has world-famous Sapphire mines located nearby.

The chopper service from Kishtwar to Machail too has been suspended, sources added.

Yesterday, Governor’s administration in an unprecedented decision had suspended Amarnath Yatra 13 days ahead of the schedule, asking pilgrims and tourists in the Valley to leave as early as possible in view of intelligence inputs about terror attacks. The yatra to South Kashmir which had started last month was to culminate on Raksha Bandhan day which falls on August 15.

Unprecedented in the last 30 years of insurgency in Kashmir, these steps have alarmed the people into preparing themselves for emergency. Locals have rushed to stock up on essentials, including petrol, groceries and money from ATMs.

Airlines have waived cancellation charges, tourists are packing up to leave, and even the National Institute of Technology in Srinagar had suspended classes “stands suspended till further orders”.

“We have inputs of a major militant strike on the Yatra and the tourists. There have been some recoveries too, as revealed by the Director General of Police and the Corps Commander in the press conference. That’s why this decision,” Additional DGP (Law and Order) Munir Khan was quoted as saying by The Indian Express (IE).

The seizure of Pak-origin weapons displayed at the press conference yesterday strengthens New Delhi’s case that the terror tap from across the border is still very much open.

There have been conflicting indications from the government before this. Just about a week ago, senior government officials were upbeat about “grassroots democracy” gaining traction in the Valley with panchayats being empowered over the last nine months since elections and were celebrating the fact that yatra pilgrims had breached the numbers recorded the previous year.

Then a couple of days ago, the state government suddenly issued an advisory suspending the yatra for four days citing weather conditions. Simultaneously, it withdrew the Jammu and Kashmir Police’s armed forces from the yatra duty. “For all practical purposes, the yatra is over,” said an official.

Earlier, on July 25, the Union Ministry of Home Affairs (MHA) ordered deployment of 100 companies of Central Armed Paramilitary Forces (CAPF) to “strengthen the CI (counter-insurgency) grid as well as for maintaining law and order situation in J&K”. This was later described by the police as a “relief to over-stretched training companies of J&K Police on duty since panchayat elections last year”.

The additional troop deployment came on top of 400 companies of paramilitary forces rushed by the Centre to J&K after the Pulwama car bombing on February 14 this year.

Two days later, reported IE, J&K Police sent a wireless message to police officers asking them to “communicate shortfall or riot control equipment/ gas gun…for special law and order duties”. The police in the Valley were also asked to keep a satellite phone and bulldozer at every police station hinting at possible snapping of communication networks.

A day later, on July 28, a Divisional Security Commissioner of Railways in the Valley asked railway officials to store ration for four months, not to keep their family members in Kashmir and to restrict staff leave due to “emergency situations”. The letter said precautionary security measures have been directed after receiving inputs from “different security agencies” including SSP Railways Srinagar regarding “forecast of deteriorating situation in Kashmir valley and issue of law and order for a long period”.

The same day, another order was issued by police asking its officers in Srinagar to “provide details of mosques and their management… for onward submission to higher authorities”.

What was weird was that the government termed these orders as “fake” and even said it would act against rumour mongers. J&K Governor Satya Pal Malik said on July 30, “None of the orders being shown are valid, there is a lot of rumour mongering here and no need to pay attention to that. Everything is fine, everything is normal.”

While these “fake” orders had come from officers, the Governor’s advisor, K Vijay Kumar, said it would not be proper for him to counter every time there was a rumour. DGP Dilbagh Singh said the police would act against rumour mongers. “There is nothing to worry. People should not take these fake orders seriously. Some miscreants are hell bent to disturb peace in the Valley and they will certainly face the music.”

Non-BJP political leaders in the Valley believe all these measures suggest that the establishment is preparing for “defining action” in the Valley which could include diluting or abrogation of Article 35A that defines the state residents of Jammu and Kashmir and their rights.