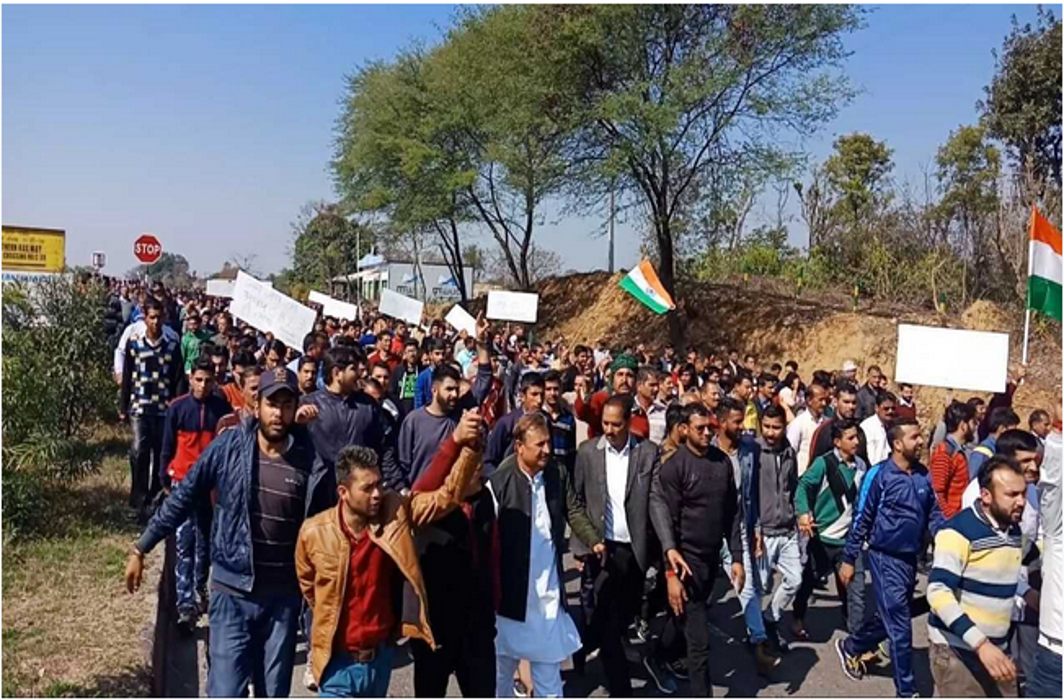 As a storm of protests erupted over the gory gang rape and murder of an eight-year-old in Jammu and Kashmir’s Kathua and the gangrape of another minor in Uttar Pradesh’s Unnao, a few voices emerged from the BJP against the crime.

So far, the party has been largely silent on the crime and the loudest voices from it have been in shocking defence of the accused in both cases.

This has evoked reactions internationally; A tweet from The New York Times said: “In India, the rape and murder of an 8-year-old girl has led to protests by Hindu nationalists – coming to the defence of the accused.”

#KathuaCase was trending on Twitter, in an outrage reminiscent of the Nirbhaya protests on social media.

Hindutva outfits have been backing the accused, all Hindus, and demanding their release, claiming they were being treated unfairly.

Forensic examination, including DNA tests, confirmed the child was confined in a Devasthan and that she was drugged, raped and murdered.

On Thursday, April 12, the Jammu and Kashmir government appointed two special public prosecutors, both Sikhs, for the trial in the sensitive Kathua rape and murder case to ensure focussed attention and speedy conduct in the matter, said a report in The Financial Express quoting a senior official. The state police crime branch which probed the alleged rape and murder of an eight-year-old girl belonging to the nomadic Muslim Bakerwal community had filed a main charge sheet against seven accused persons and a separate charge sheet against a juvenile in a court in Kathua district earlier this week.

Asked whether two Sikh officers were engaged as SPPs to ensure “neutrality” in view of Hindu-Muslim polarisation over the case, J&K DGP SP Vaid said “please do not think on religious lines. It has not been done. Police does not think in terms of Hindu or Muslim or Sikh”.

Vaid said nothing could be worse than this crime. “It is a very heinous crime, it can’t get worse than this. The SIT has done a very professional job and filed chargesheet, now we hope justice will be done,” said Vaid.

Victim’s family under threat: Even as the chorus for justice in Kathua rape case grows louder, the minor victim’s family is under threat. The sister of the eight-year-old girl, who was held captive, sedated and repeatedly raped before being killed, says her family received death threats recently. Speaking to News18 Network, she demanded death penalty for the accused.

A report in The Times of India (TOI) said the family of the raped and murdered eight-year-old quietly abandoned their home in Rasana village out of fear late on Tuesday after the Jammu Bar Association called a strike to protest the J&K police’s “mishandling” of the investigation into the case.

According to media reports, Asifa’s father Muhammad Yusuf Pujwala has left for an unknown place along with his wife, two children and livestock. Earlier, it was said that the family was planning to leave for Kashmir next month.

The girl, who belonged to the nomadic Bakerwal Muslim community, had disappeared from a spot near her house on January 10. A week later, her body was found in the same area. A Special Investigation Team, formed to probe the incident, has arrested eight people, including a local priest, two Special Police Officers (SPOs) and a head constable, who was charged with destroying evidence.

Lawyers obstructing justice: On Tuesday, April 10, an FIR was registered against lawyers who attempted to prevent the police from filing chargesheet in the Kathua rape and murder case in Jammu and Kashmir, as the investigation came close to a conclusion. “The FIR has been lodged into the incident wherein some lawyers tried to obstruct the presenting of the chargesheet by the crime branch in the court of the Chief Judicial Magistrate at Kathua on Monday. Action under law will be taken against those found involved in the incident,” J&K Director-General of Police SP Vaid said.

In response, the Jammu High Court Bar Association (JHBA) called for a bandh in the Jammu region on Wednesday in support of various demands, including CBI probe into the rape and murder of the eight-year-old girl. Claiming mass support to the call for a strike, JHBA said more than two dozen social, religious and political groups besides commercial transport and tanker unions have pledged support.

BJP involvement: Local BJP leaders and two BJP ministers in state cabinet have come out in support of the accused, led out marches and held demonstrations, with the crowd waving the national flag and shouting ‘Bharat Mata Ki Jai’.

One of the leading lights of the protest in favour of a CBI probe is senior Congress leader BS Slathia, the president of the Jammu Bar Association. Slathia spearheaded Wednesday’s Jammu bandh. Slathia is very close to Congress veteran and Rajya Sabha leader of the opposition Ghulam Nabi Azad, who hails from Doda in the Jammu region. In the 2014 Lok Sabha election in the Udhampur-Doda constituency, Slathia was Azad’s chief election agent. Azad lost by about 60,000 votes to BJP’s Jitendra Singh, now minister of state in the PMO.

The chargesheet filed in the case said the 8-year-old girl was abducted, kept confined in a Devasthan, repeatedly gang-raped, drugged, beaten and ultimately killed by a group of men in Kathua. This has been revealed in a charge sheet filed by the Jammu and Kashmir police’s crime branch.

Briefly, it says the 8-year-old was gangraped repeatedly inside the Devasthan or prayer hall, after the mastermind had “performed rituals”. One of the rapists was called from Meerut to satisfy his lust. The girl was confined using sedatives, then strangled and hit on the head twice with a stone in order to make sure she was dead. But not before another accused, a police personnel, asked the others to wait because he wanted to rape her one last time.

The motive was to dislodge a group of Bakherwal Muslim nomads from Rasana village in Kathua near Jammu.

In the days that followed, the chargesheet states, the accused paid Rs 1.5 lakh as a bribe to local policemen who knew where the girl was kept and helped cover up the crime initially.

According to the chargesheet, the mastermind behind the rape and murder is retired revenue official Sanji Ram who is among the eight arrested, along with his son Vishal Jangotra and nephew, believed to be a juvenile.

According to the chargesheet, the girl’s father Mohd Yousuf lodged a complaint on January 12 at the Hiranagar station that his daughter who had gone for grazing horses in the nearby forest at about 1230 hrs on January 10 had not returned. A FIR was lodged and police arrested Ram’s nephew, leading to allegations of a cover-up by the Bakherwal community. On January 22, the case was transferred to the Crime Branch.

Here are some reactions:

Congress President Rahul Gandhi led a march at India Gate last night in protest of the Unnao and Kathua rape cases. He said there were repeated incidents of violence, rape and murder of women in the country. “We want the government to take action.

“Today, women are feeling insecure to move out of their houses. Somewhere a child, a woman is raped, killed and we want that the government should resolve this. The women of the country should feel safe,” he said.

Gandhi said it was a national issue and not a political issue. “This is an issue concerning women,” he said, adding that people from all parties as well as the common man was at the India Gate. “I only want to say that the atrocities being committed against women, the government should do something about it.” He said Modi’s slogan of “Beti Bachao, Beti Padhao” was a correct slogan. “We are saying that Narendra Modi should begin the task of protecting women of the country,” he said.

Union Minister Maneka Gandhi says she’ll work to amend the POCSO Act to make rape of children under 12 years punishable by death. . “I am deeply moved with the rape incident of Kathua and [other cases]… (sic),” Maneka said adding that she and her ministry intends to bring an amendment of the POCSO Act to make death penalty must for rapists of children under the age of 12.

Union minister VK Singh on Thursday, April 12, said “we as humans” had failed the eight-year-old girl from a minority nomadic community who was gangraped and killed in Jammu and Kashmir’s Kathua district but she would not be denied justice.

Union minister Smriti Irani, however, earlier said that the gangrape cases should not be politicised.

BJP spokesperson Meenakshi Lekhi termed much of the attacks on the BJP-led government in UP over the Unnao case, and the support that two BJP Ministers in the Mehbooba Mufti government extended to the Hindu Ekta Manch on the side of the accused in the Kathua case “as a pattern” by the opposition to undermine the Modi government.

A BJP MP from Madhya Pradesh Nandkumar Singh Chouhan said, “The act must have been committed by Pakistan’s agents to divide people by chanting Jai Shri Ram.”