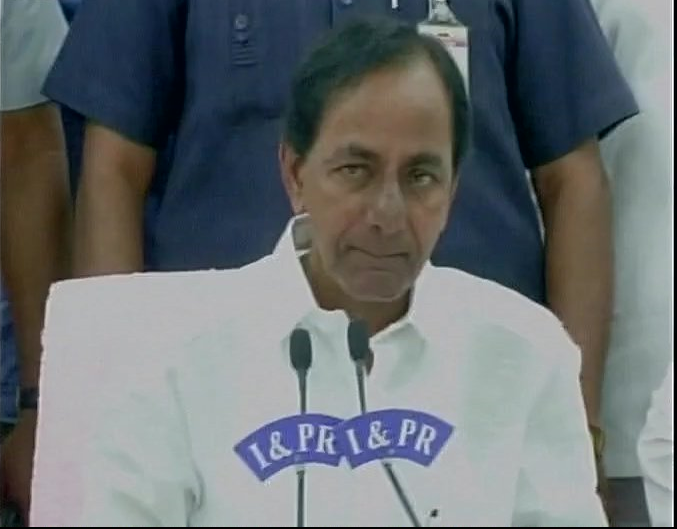 A war of words between Telangana Chief Minister K Chandrasekhar Rao and BJP president Amit Shah has sent the political temperatures soaring in the state. Rao has accused the BJP of trying to disrupt communal harmony in Telangana by raising the issue of the 12 percent quotas to Muslims announced by the state government unnecessarily. He also said the remarks in question are “baseless” and that there’s a “limit to patience and tolerance”.

Addressing a press conference in Hyderabad late on Wednesday night in the wake of Shah’s visit, the CM criticised his stand on the matter of Muslim reservations.

“On the one hand, Prime Minister Narendra Modi, during the recent BJP meeting in Odisha, talked about Muslim reservations. He asked his party cadre to reach out to Muslims. He asked the new National Commission for OBCs to look into quotas for Muslims.  On the other hand, his party president Amit Shah and Telangana BJP leaders criticize us for announcing quotas for Muslims,” he said.

Rao said this was despite his having repeatedly clarified that these quotas were being provided not on religious grounds but on grounds of the community’s backwardness in education and employment after conducting scientific studies on their living conditions.

Rao has also demanded an apology from the BJP president for his remarks on the quantum of funds given to the TRS-ruled state by the centre. While in Nalgonda on Tuesday, Shah had claimed that Telangana had been given an additional amount of Rs 20,000 crore annually under various heads by the NDA government. Sharing detailed figures with his audience, Rao has offered to quit the CM’s post if the figures provided by Shah are proved correct.

Rao said Telangana has received Rs 67,390 crore under tax devolution and various central schemes till date from the centre as its due share. The state, in its turn, has contributed Rs 1 lakh crore during the last three years to the central exchequer on account of income tax, central excise and service tax collections.

Rao has also disagreed with Shah’s observation about the TRS government’s purported failure in implementing central schemes. “Those remarks are baseless. There is a limit to patience and tolerance—whether it is Amit Shah or any Shah, or KCR. Telangana is Badshah,” Rao said.

Reacting to the BJP’s claims of forming the next government in the state, he said that it would be unable to retain even the five seats it currently holds in the assembly. “We will not forgive anyone who tries to insult Telangana. I demand that Shah apologise to the people of Telangana for his false remarks… These are unwarranted comments from a person who heads a party that rules this country,” he said