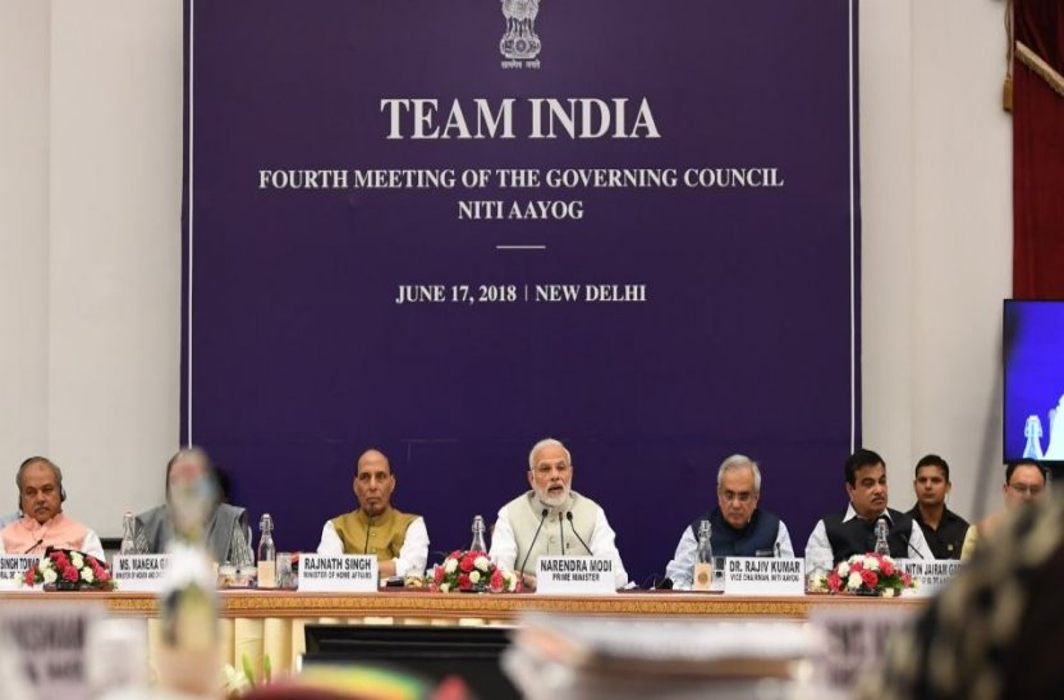 He said that the Chief Ministers of the states have played a key role in policy formulation, through sub-groups and committees on issues such as Swachh Bharat Mission, Digital Transactions and Skill Development.

Delighted to interact with Chief Ministers, officials and other dignitaries at the 4th Governing Council meeting of @NITIAayog. This is a wonderful platform to bring historic transformation in the nation. Here are highlights of my opening remarks.  https://t.co/xGkcBA5asC pic.twitter.com/yoH115Tzcc

PM’s comment comes in the backdrop of four state Chief Ministers, including Mamata Banerjee from West Bengal, N. Chandrababu Naidu of Madhya Pradesh, Pinarai Vjayan of Kerala an H. D, Kumaraswami of Karnataka were denied permission to meet Delhi CM Arvind Kejriwal at Delhi’s LG House on Saturday. They had earlier said they would meet PM Modi to seek resolution for the “constitutional crisis”.

The four Chief Ministers have accused the central government of stoking the crisis and “destroying” the federal structure.” Mamata Banerjee was quoted saying, “If this is happening in the capital, then what will happen in other states?”

Kejriwal, while talking to a TV channel on Saturday, thanked the four Chief Ministers and said that the officers’ protest was at the “instance of Prime Minister” and asserted that “We will work together to save democracy”.

Meanwhile, a senior BJP leader Vijay Goel said on Saturday that the leaders and Chief Ministers were in capital to attend the NITI Aayog meeting and not to do politics saying, “It doesn’t suit them.”

Delhi’s Chief Minister did not attend the NITI Ayog meeting on Sunday as he and his three cabinet colleagues have been camping at the waiting room in Lt Governor’s house for almost a week, demanding an end to a “strike” called by bureaucrats after the alleged assault on Delhi Chief Secretary Aanshu Prakash in February this year.

The NITI Ayog meeting discussed the measures taken to double farmers’ income and the progress in flagship schemes. The development agenda for “New India 2022” was also expected to be approved in the meeting.

The council includes all states’ Chief Ministers and leiutinent governors of Union Territories, except Delhi and Pondicherry.

Earlier in the day, Delhi CM Arvind  Kejriwal stoked a controversy by wondering on Twitter what Delhi’s LG is doing at the Niti Aayog meet. “Under which provision of the Constitution does LG have powers to replace the Chief Minister?” he tweeted.

Under which provision of the Constitution does LG have powers to replace the Chief Minister? I have not authorised him to go in my place. https://t.co/ccA94tpKNo

Meanwhile, Trinamool chief and West Bengal CM Mamata Banerjee said that the issues of the Delhi government need to be heard and dealt with quickly. “I along with the Chief Ministers of Andhra Pradesh, Karnataka and Kerala have requested PM Modi today to resolve the problems of Delhi government immediately,” she said.

I along with the Hon’ble CMs of Andhra Pradesh, Karnataka and Kerala have requested Hon’ble PM today to resolve the problems of Delhi government immediately.