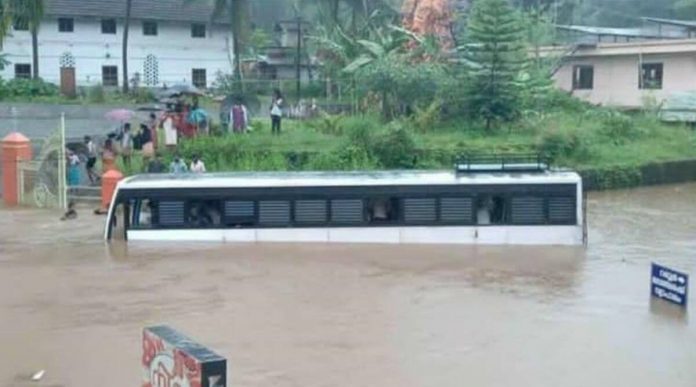 Kerala has been witnessing heavy rain since Friday night, Kottayam and Pathanamthitta are two of the most affected districts. Kerala government has requested the assistance of the Indian Air Force for rescue operations in God’s own state. Officials have also reported of two landslides in the areas of Kottayam and Iddugi.

The Chief Minister informed that help from the Air Force is on the way, where landslides have occurred following heavy rains. Corporation and Registration Minister V N Vasavan told that at least three houses have been washed away in Kottayam and 13 people are missing. Minister Vasavan also assured that Air Force is on the way to help the people in floods. “We have received information about some people missing and over 60 waiting to be rescued as water entered their homes,” added Minister. While Minster said that at least four landslides have been reported from various parts of flood-hit areas.

A press release from CMO Kerala informed that six teams of NDRF have been deployed in flodd hit areas, Pathanamthitta, Idukki, Alappuzha, Ernakulam, Kottayam and Idukki. While two teams of Army is to be deployed in capital city Thiruvananthapuram and Kottayam district. CMO also suggested people stay in safe places, India Meteorological Department (IMD) has issued Red alert for five districts, Kakki dam in Pathanamthitta, Sholayar in Thrissur, Kundala and Kallarkutti in Idukki.

Kerala CM Pinarayi Vijayan is having a meeting with all district collectors and other concerned authorities.

A video of KSRTC bus stuck in floods, with locals trying to rescue the passengers, is going viral on social media.

Kottayam and Pathanamthitta are the most affected districts in the state as of now due to heavy rains since Friday night.