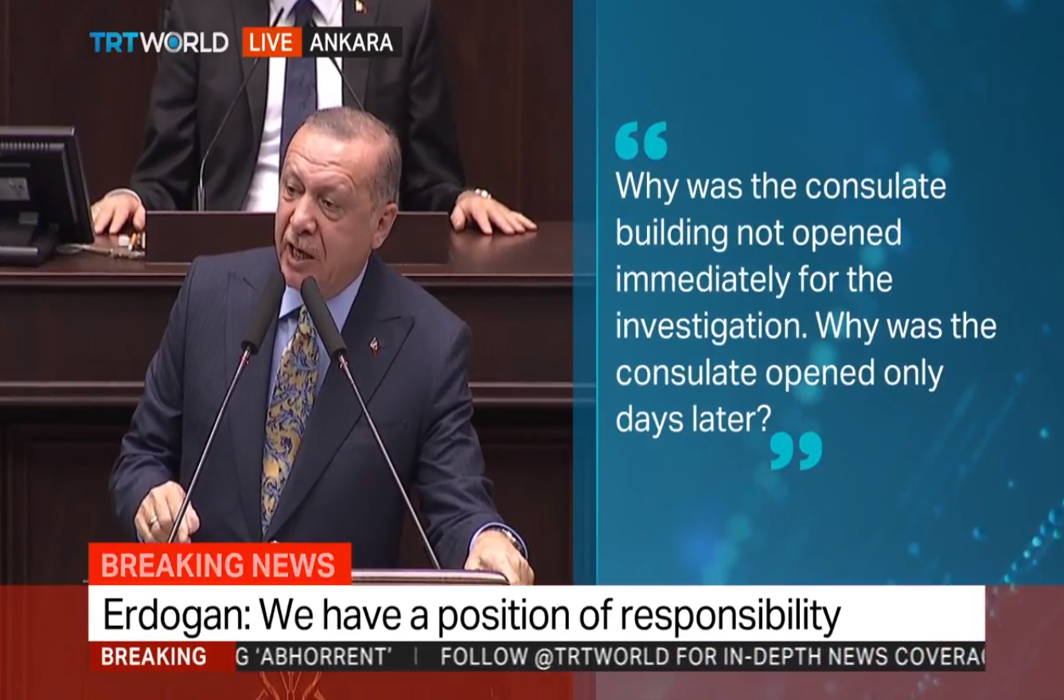 Turkish President Recep Tayyip Erdogan has demanded that the 18 Saudi nationals, involved in the murder of journalist Jamal Khashoggi, should be extradited to Turkey for judicial trial as the crime took place in his country. He has also vowed to continue full investigation with responsibility in accordance to the international law.

While speaking at Turkish parliament on Tuesday afternoon, Erdogan said that presence of the top Saudi forensic expert on the crime scene indicate that the murder was pre-planned. He has also demanded fresh look at the Vienna convention extending immunity to the diplomatic staff working in the foreign missions. APN monitored his live speech through official TRT World TV channel.

The Turkish leader also demanded the Saudi authorities to divulge the identity of the “local coordinator” who reportedly carried the dead body of the deceased journalist. Earlier Saudi Arabia’s foreign minister Adel al-Jubeir had claimed that the body was wrapped in a rug and sent out through the local coordinator in a mission’s van.

Khashoggi entered into the Turkish Consulate in Istanbul for getting some document necessary for getting married. His fiancée Hattis Cengiz was waiting outside. She alarmed Turkish authorities shortly after the closing of the mission for the day.

Saudi authorities kept denying the the alleged killing. However, after two weeks, Riyadh accepted that journalist died during the interrogation. The 15-member team, which was specially flown into Istanbul the day of the killing, got infuriated and he died of “chokehold”.

Read More:- Khashoggi was being trolled by MBS internet army

Moreover, Riyadh also accepted that one of the 15-member, a body-double wore Khashoggi’s clothes along with his Apple watch and goggle and left the mission from back side door.

CIA director Gina Cheri Haspel was in Trukey on Monday, a day before his speech in the parliament. US has been working wrapping up the mystery of Khashoggi’s death, obviously, for face saving, and continue with the $110 billion weapons deal, US President Donald Trump, signed in May last year, during his maiden foreign trip to Riyadh.

Earlier Donald Trump had a telephonic talk with Erdogan on Monday. He was also quoted saying that “some great persons” from US are in Saudi Arabia and Turkey to help investigate the case.