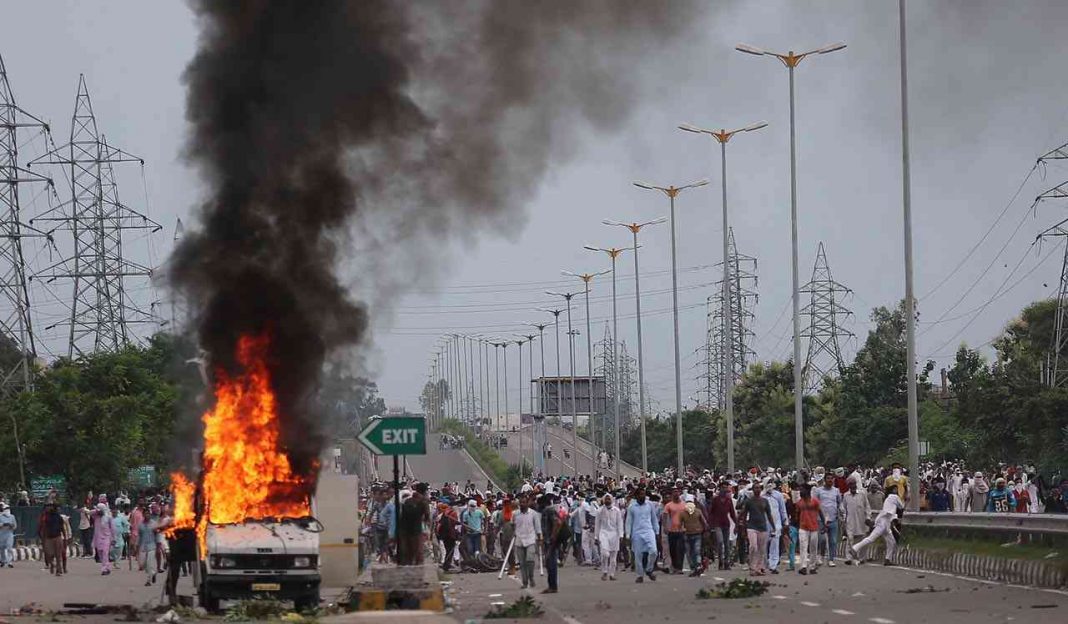 Despite imposition of curfew in Panchkula, Haryana’s Manohar Lal Khattar government allowed over 1.5 lakh followers of Dera chief Gurmeet Ram Rahim Singh to converge in the town before the special CBI court declared the Godman guilty of raping and sexually exploiting 2 of his followers in 2002. The resulting riots claimed the lives of 32 people, damaged property worth crores of rupees and the mayhem spread to Delhi, Punjab, Rajasthan and Uttar Pradesh

As Haryana was burning, on Friday, and the wildfire spread to the neighbouring states of Punjab, Delhi and Rajasthan, the Punjab and Haryana High Court hit out at the Manohar Lal Khattar government. “You (Haryana government) allowed the city to burn for political gains. It seems the government has surrendered to agitators,” the court had said.

The indictment by the Punjab and Haryana High Court that came in light of the widespread violence that began as soon as a special CBI court in Panchkula declared Dera Sachha Sauda chief Gurmeet Ram Rahim Singh guilty of raping two of his followers in 2002, is reason enough to recount how Haryana’s Khattar government capitulated before the Dera goons and allowed them to unleash mayhem.

The complete collapse of Haryana’s law and order machinery that was witnessed on Friday soon after the pronouncement of the verdict against the rapist Godman was perhaps as much a result of the manner in which the Khattar government tried to mislead people and even the court’s on the gravity of the situation in Panchkula.

Around 11.30 am on Friday, over three hours before the Panchkula CBI court declared its verdict, the Khattar government’s Advocate General BR Mahajan had claimed before the Punjab and Haryana High Court that with the exception of two spots – a “public park” and “community hall” – most Dera followers had been evacuated from Panchkula.

The High Court had clearly directed the Haryana government “not to shy away” from using “any kind of weapon” to deal with persons indulging in arson, loot and violence. However, when the mayhem began – police personnel – a majority of them wielding lathis and not weapons – and even companies of the Army that had been called in to prevent any untoward incident, were seen fleeing their posts when the Godman’s followers clashed with them, torched vehicles and beat up media persons.

The Haryana government, especially Khattar who had appealed for calm a short while before the verdict – disappeared when the violence began. While the High Court was prompt enough to announce that properties owned by Gurmeet Ram Rahim Singh’s Dera Sachha Sauda will be attached to recover and compensate for the financial losses caused by the riots, officials of the Khattar government and ministers like Anil Jain were still crying helplessness, insisting “what can we do”.

It is no secret that the BJP owes its landslide victory in the Haryana assembly polls in 2014 that enabled the appointment of first-time MLA Khattar as the chief minister in part due to Gurmeet Ram Rahim Singh which had appealed to the state’s electorate to vote for the saffron party. The camaraderie between Khattar, his party’s ministers and MLAs and the Dera chief too was a very public one. Soon after the BJP had won Haryana in 2014, 19 of its newly-elected MLAs led by the party’s national general secretary Kailash Vijayvargiya had made a public spectacle of parading before the now-convicted-of-rape Godman to pay their respects.

Through the week before the rape verdict, Khattar government had allowed Dera followers to march to Panchkula, their numbers constantly swelling as Fridayapproached. Khattar’s cabinet colleague Rambilas Sharma, his bureaucracy and even the state police kept insisting that the marching mob comprised of “peaceful followers of the Dera”.

The High Court, which on Friday, slammed the Khattar government of “complete collusion” with the Dera followers in allowing them to wreak havoc had earlier hit out at the administration for issuing two “shoddy” Section 144 CrPC orders, in which the Panchkula district administration ordered that they shall only bar entry of people “moving with weapons”. The state government had later amended the orders and barred “assembly of five or more persons in Panchkula” – but asFriday’s mayhem firmly established, even these orders were not implemented.

Despite imposition of curfew, the Khattar government’s police allowed the Dera chief – who also enjoys a Z+ category security cover given by the government – to drive from Sirsa to the Panchkula court in a convoy of over 100 vehicles, filled with his rabid followers who further incited the mob en route.

Three days prior to the rape verdict, Haryana’s Additional Chief Secretary (Home) Ram Niwas had said, “We are totally prepared to deal with any situation. Nobody shall be allowed to breach the peace. Preventive arrests shall be made, if required”. Last week, the Chief Secretaries and police chiefs of both Punjab and Haryana met Union Home Secretary Rajiv Mahrishi in New Delhi and apprised him of the situation in both the states. Both the States also sought paramilitary support.

It is pertinent to point out that although there were reports of arson in Congress-ruled Punjab too after the verdict, no casualties were reported from the state – a sharp contrast to what unfolded in Haryana.

In the three years of his government, this is the third instance when Khattar’s mal-governance has cost the state heavily. In November, 2014, six people died during the 14-day standoff between police and followers of another self-styled Godman – Sant Rampal of Satlok Ashram in Hisar. Then in February 2016, 30 persons were killed in another police-public clash during the violent Jat agitation. Each time, Khattar has issued appeals for calm and they have failed to have any effect on the mobs which his administration has conveniently allowed to gather despite prohibitory orders.

Even after the violence began, the Haryana police preferred to worry more for the rapist Godman Gurmeet Ram Rahim Singh’s safety and comfort – flying him to a well-appointed government guest house with five-star amenities in Rohtak. It was only after a media outcry over this special treatment that the police surreptitiously moved the convict to the Rohtak jail. All along, in total violation of establish convention, the Dera chief was accompanied by a woman, whose identity could not be established but who, unofficially, the cops claim was his daughter.

If Khattar and his government abdicated their responsibilities of maintaining law and order, the Narendra Modi-led central government didn’t fare much better.

Almost as if the Union and Haryana government’s ministers and officials were following a pre-written script, Union home secretary Rajiv Meharshi described the tense situation as “serious but not yet out of control” on Friday evening. By the time Meharshi made this comment, 14 deaths had already been reported, the violence had already spread to the neighbouring states, coaches of at least two trains (one in the national capital’s Anand Vihar Railway station), several buses and public transport vehicles, buildings and government property had been gutted by arsonists. But according to the Union home ministry which is supposedly the guardian of the country’s internal security, the situation was “still not out of control”. Did the home secretary Meharshi not know the extent of the violence or was he deliberately underplaying it?

Union home minister Rajnath Singh, who was then on his way to brief Prime Minister Narendra Modi about the situation, insisted on Friday evening that the Haryana government “cannot be blamed” for the riots.

It was after around 8 pm on Friday night that news began doing the rounds of Narendra Modi being upset with Khattar – the man who was handpicked by the Prime Minister to become chief minister despite his inexperience of administration. At 8.18 pm, by when over 28 deaths had been confirmed, Modi appealed for peace through his Twitter handle. The Haryana government had suspended internet services even before the verdict came but then these appeals for peace, as had already become evident during the day, were perhaps only for public consumption.