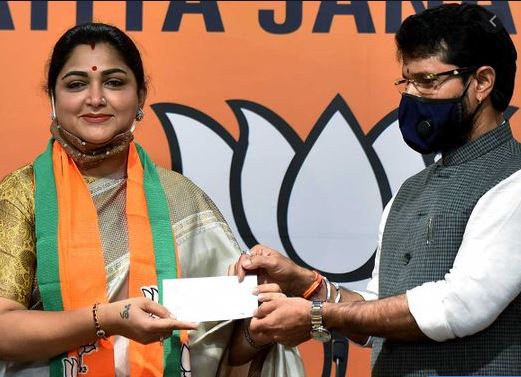 Former Congress spokesperson Khushbu Sundar joined the BJP on Monday in New Delhi. She was welcomed into the party by BJP leaders CT Ravi and Sambit Patra. She tendered her resignation from the Congress alleging that she was pressured and could not continue in the party because of senior leaders. The Congress dropped the actor-politician from its list of spokespersons with immediate effect.

In her resignation letter to Congress president Sonia Gandhi, she wrote that people like her who wanted to work for the party sincerely were being pushed and suppressed. Few elements at higher levels within the party had no ground reality and public recognition were dictating terms, she said. She has extended her gratitude to former Congress president Rahul Gandhi in the letter.

After a thorough and prolonged thought process, Sundar said she decided to end her association with the grand old party, which she joined 2014.

The resignation emerged as Sundar headed to Delhi on Sunday, where she is expected to join BJP later today. However, at the airport, when she was asked by the media, she refused to comment.

Speculations of her joining the saffron party intensified on Sunday, when she tweeted that change was inevitable. She said that with age one evolves, the thoughts and ideas take a new shape, and one understands the difference between right and wrong.

The developments come ahead of Tamil Nadu Assembly elections scheduled to be held next year. As per reports, the BJP state unit was quoted saying that Sundar will change the perception of the party in the state. It is expected that the party may also rope her in for the 2021 assembly elections to break new ground in the state, said sources.

Earlier this year, Sundar had faced a rift with Congress when she backed the Centre’s new National Education Policy, following which she tweeted an apology to Rahul Gandhi on differing opinions.