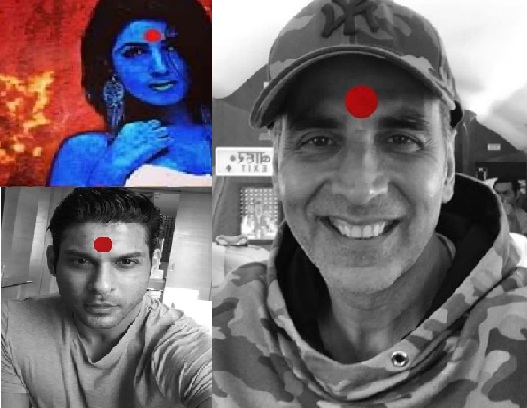 As Akshay Kumar’s upcoming horror-comedy drama titled Laxmii is all set for release on OTT platform Hotstar today, celebrities like Twinkle Khanna, Siddharth Shukla among others have extended their support to the campaign ##AbhumariBaariHai. The campaign has been started to support the third gender, a topic which is dealt with in the upcoming movie.

As part of Laxmii promotions, Kumar urged people to join him using the Ab Hamari Baari Hai filter on Instagram to celebrate humanity. The campaign is aimed at breaking stereotypes and extending support to third gender with the ‘Laal Bindi’(red vermillion dot on forehead) as symbol of equal love and respect.

Kumar’s Laxmii co-star Kiara Advani posted a video starring herself with Kumar, which featured third genders of the country including Laxminarayan Tripathi.

Following which several celebrities from film industry joined the campaign and posted their pictures with #Abhumaribaarihai filter.

Kumar’s wife and actor Twinkle Khanna shared a picture in which she was spotted wearing a red bindi. Khanna was earlier called Twinkle Bomb by a troll in reference to the film’s old title Laxmmi Bomb. With the picture, she gave a befitting reply to the troll saying, you make a joke of god, god clearly likes a good joke and created you. Like a true blue bombshell, she will take up a new skin tone and bindi look this Diwali, she further wrote.

The trolls are so helpful just when I was looking for the supporting image, here it is:) Crop rather than repost-you will see why in my column today. One tagged this picture with a comment, ‘Third class person. You make joke about God.’ I am almost tempted to reply, ‘God clearly likes a good joke, otherwise she would not have made you.’ By the way, I think I am going with the new skin tone and bindi look this Diwali like a true-blue bombshell 🙂 click on link in bio to read more #DiwaliBombshell

Bigg Boss 13 winner Sidharth Shukla also participated in the campaign. He hailed Kumar’s effort to support the third gender and posted a picture of himself wearing a large red vermillion dot on his forehead.

Really admire the initiative that Akki sir has started. We got to take a step beyond and show love, acceptance and support towards the third gender. Let’s wear the Laal Bindi and come together kyunki #AbHamariBaariHai unka saath dene ki jinhone aaj tak hamari khushi mein saath diya. ❤️

Earlier, the film was embroiled in controversy for its title Laxmmi bomb. The Rajasthan-based outfit Shri Rajput Karni Sena had filed a legal notice, claiming that the title demeans Goddess Laxmi. Following which the Central Board of Film Certification (CBFC) ordered to change the title to Laxmii.