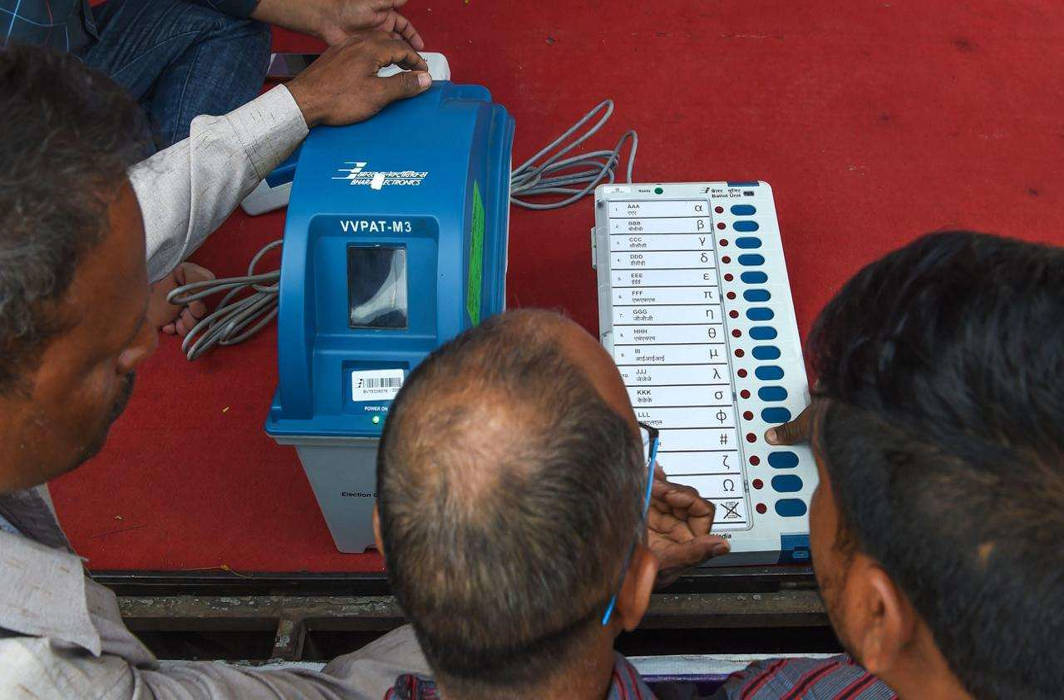 Contending that the Supreme Court mandated matching of 5 of Electronic Voting Machine (EVM) votes with Verified Voter Paper Trail (VVPAT) was only for a sample, leaders of 22 Opposition parties, in a meeting with Election Commission (EC) today (Tuesday, May 21) said that in case the sample indicated a mismatch, all votes should be matched with VVPAT slips.

In April, the Supreme Court had ordered the election commission to count to verify EVM votes with the paper slips generated by the VVPATs, or voter verifiable paper audit trail, for five polling booths selected on random basis in every assembly segment of a Lok Sabha constituency.

The commission, which reportedly heard them articulate their apprehensions for nearly an hour, did not give a firm commitment, said media reports. But they did get the assurance that the three Election Commission members would meet on Wednesday morning to discuss their two suggestions on counting of votes from the VVPAT slips.

The opposition parties are demanding that the VVPATs for the five selected booths in each assembly segment should be counted first. Their second demand is that if there is any discrepancy during VVPAT verification at the 5 booths, the Election Commission should go by the paper slips of VVPATs of all polling stations of that particular Assembly segment.

“We told the EC that the VVPAT machines should be counted first and if there is any discrepancy, then all of them in that segment should be counted,” Congress leader Ghulam Nabi Azad told reporters after meeting EC officials.

In the instructions put out by the poll panel, the VVPAT slips were to be counted at the end of the last round.

“This is a no brainer,” said Abhishek Singhvi of the Congress. After all, he reasoned, the Supreme Court had ordered counting of VVPAT slips from five polling booths only as a sample. If there is a problem with the sample, it means that entire lot may have been tampered.

Singhvi was also sore that the EC needed time to think about the two demands or suggestions from the opposition. Singhvi said this wasn’t a new proposal that the opposition parties had sprung on the commission but was part of the bundle of memos that had been sent to the poll panel.

“We raised these same issues in last one-and-a-half months. We asked Election Commission why have they not responded. Strangely, EC heard us for almost an hour and assured us they will meet us again tomorrow,” ANI quoted Singhvi as saying.

Telugu Desam Party chief Chandrababu Naidu, who has played a key role in rallying the opposition leaders around EVMs, said the opposition parties have asked the EC to “respect the mandate” of the people and it “can’t be manipulated”.

The fresh emphasis on concerns around voting machines comes against the backdrop of multiple reports and videos of EVMs being transported, which opposition parties say, raises questions about the reliability of the voting machines.

The Election Commission rebutted these reports, insisting that the polled EVMs and VVPATs had been brought to the designated strongrooms under security cover and in the presence of the candidates.

The parties also want the election commission to introduce a system for tracking EVM machines so that they can be identified with their numbers and location of use. An apprehensive Congress feels it is very important to track the EVMs to better understand the logic of replacement of machines.

The top opposition leaders had earlier in the day met to discuss the possibility of a non-NDA alliance staking claim to government formation.

Ahmed Patel, Ghulam Nabi Azad, Ashok Gehlot, Abhishek Manu Singhvi of the Congress, TDP’s Chandrababu Naidu, Satish Chandra Misra of the BSP, Sitaram Yechury of the CPI(M), D Raja of the CPI, Delhi Chief Minister and AAP convenor Arvind Kejriwal, Derek O’Brien of the TMC, Ramgopal Yadav of the SP, Kanimozhi of the DMK, Manoj Jha (RJD), Majeed Memon (NCP), Devinder Rana (NC) had taken part in the meeting held before the leaders headed out for the meeting with the election commission.

The Opposition meeting came on a day the Supreme Court dismissed a PIL by a Chennai-based organisation ‘Tech 4 All’, seeking 100 per cent matching of VVPAT slips with EVMs during the counting of votes on May 23.

“The CJI had dealt with this matter. Why are you taking chance before a two-judge vacation bench. We will not list any such case for urgent hearing. We cannot override the CJI’s order…This is nonsense,” said a vacation bench comprising justices Arun Mishra and MR Shah.

A three-judge bench, headed by CJI Ranjan Gogoi, on May 7 had dismissed a review plea filed by 21 opposition leaders seeking that random matching of VVPAT slips with EVMs be increased to 50 per cent.