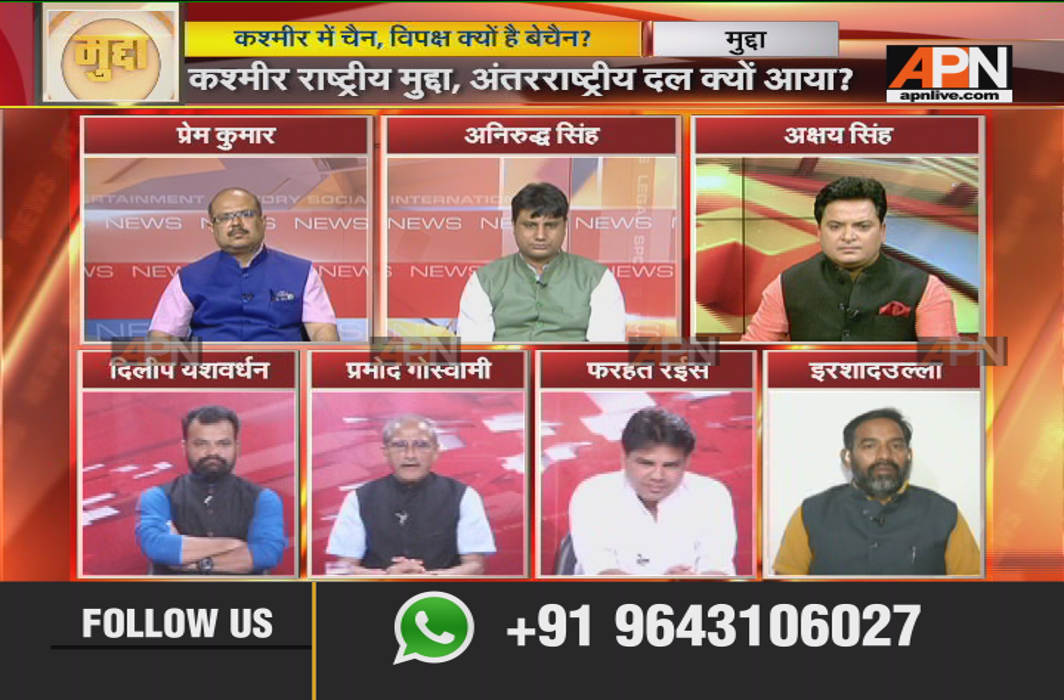 Harshwardhan said: “Nobody can be denied a touristy trip. The opposition can go to the Valley anytime. But the opposition has other intentions, nothing to do with a touristy interest. The foreign MPs are our guests, and we should welcome them.”

Singh said: “The opposition does not know how to perform its role. They are so anti-BJP that they have lost national interest too.”

Irshad Ullah said: “The way the EU MPS are visiting, I don’t know what are we trying to show them? Our own leaders are sent back from the airport. Why are the authorities stopping our own people?”

Goswami said: “This is a serious matter. There is no need to take such strong positions. Pakistan is watching the situation and is all out to malign the nation on this issue internationally. There is useless criticism; we should whole-heartedly welcome the bold and sensible steps taken by the government.”

Prem Kumar said: “I don’t think there is any mudda for the opposition to raise.  If the European MPs are here to observe the situation in the Valley, let us wait what they have to say. We should not fall into any trap laid by Pakistan. On the other hand, our own MPs are denied. The BJP is assuming that our MPs will create nuisance in the Valley and the foreign MPs will not. That’s not fair.”

Harshwardhan said: “Leaders are willing to do anything to grab political mileage.”

Goswami said: “We should look at the history, and then we can understand that after scrapping Art 370, it was important to take steps to ensure the safety of citizens in Kashmir. But Pak is all out to internationalise the issue, and has been saying there is an ulterior motive in stopping MPs from visiting the Valley. In that context, the visiting EU MPs will help to clear the matters. But I also think our MPs should also be allowed to visit the Valley.”

Singh said: “See, we are here to show the world that we are strong and self-reliant. There has never been any question on Modi-ji’s international policy, or Amit Shah’s Home policy. Please also note the number of curfews that have been imposed in the Valley over the years.”

Prem Kumar said: “We consider Kashmir issue as a bilateral matter. When EU MPs give their report, won’t that lead to internationalisation of the issue? We are calling the trip ‘unofficial’, but I don’t know if it can really remain ‘unofficial’.”

Singh said: “But even Indian MPs are frequently invited abroad, so what’s wrong with that?”

Harshwardhan said: “It is okay for the opposition to question, but is their motive social or political?”

Irshad Ullah said: “Art 370 scrapping is commendable. But the opposition is rightfully raising concerns. Kashmiris are Indians; we have to stand for their rights.”