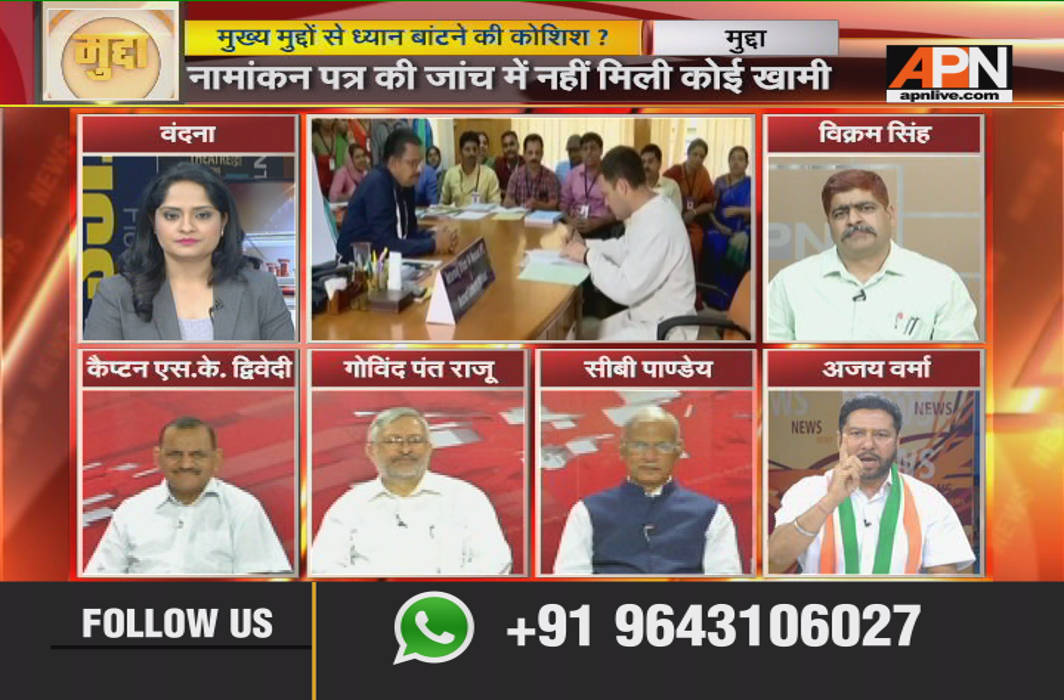 The Amethi Returning Officer (RO) on Monday set aside objections on Congress president Rahul Gandhi’s nomination papers for the seat and held the document valid, after scrutinising allegations of discrepancies over citizenship and other issues. Of late, questions have been raised regarding Rahul Gandhi’s nationality, his real name and so on. Are such issues being raised because of poll desperation? APN’s popular debate Mudda discussed the issue. Anchorperson Vandana posed the questions to panellists, including the Congress’s Ajay Verma, BJP’s Vikram Singh, legal expert CB Pandey, former bureaucrat Capt SK Dwivedi, and APN consultant Govind Pant Raju.

Singh said: “Rahul Gandhi has been given a clean chit today. But it is normal to raise these kinds of questions. People have the right to question.”

Verma said: “If it is about making things clearer, a JPC probe on Rafale is desired. Questions have been even raised on Hemant Karkare. If people with a militant bent of mind get tickets, this is what will emerge.”

Singh said: “Please find out how many criminals have got Congress tickets. A huge list will emerge.”

Rehading the controversy over Rahul Gandhi’s name, Capt SK Dwivedi said: “Names can be changed. This issue has been examined in the past. There is nothing new to that.”

Regarding Rahul’s nationality, Pandey said: “Rahul Gandhi has already contested elections in the past. If he is not a national, then how could he contest earlier? There is nothing to this now.”

Vandna wanted to know if there is a dearth of muddas. Raju said: “Allahabad High Court is under scrutiny regarding Rahul’s nationality. These issues have been raised because of the elections.”

Verma said: “BJP has lost out on muddas. Now it is all about Rahul’s nationality. They can go ahead and do whatever. The people of the country know the truth. Mudda is not just about EC giving a clean chit to the Congress chief, BJP is here to create trouble.”

Vikram Singh said: “Verma has made a big allegation that EC is doing what BJP dictates. That is derogatory. Is this a question on the EC’s or the BJP’s principles? It is better to contest elections on real muddas. BJP is doing exactly that which is why the people of the country are with it.”

Pandey said: “It is for the courts to settle the nationality issue. If Rahul Gandhi is a voter then how come he is not a national? Those who want to challenge this should go to the courts.”

Vikarm Singh said: “Congress is on the backfoot, it has no agenda which is why it rakes up useless issues like Rafale JPC etc.”

Verma said: “We are not on the backfoot. It is our duty to expose the government. Something is looking black in the bottom, which is why a JPC probe has been demanded on Rafale.”

Singh said: “But even the EVM controversy was raked just for the heck of it. Congress is a poor loser.