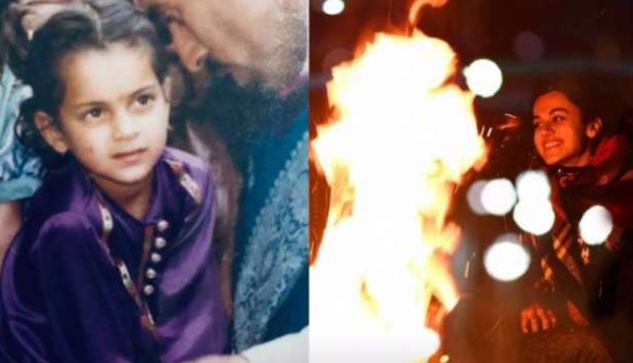 People all over the country celebrated the first festival of 2021, Lohri today. Bollywood also took to their social media accounts to pour in wishes for their fans, friends, and family. From  Amitabh Bachchan to Kangana Ranaut, stars extended their warm wishes in the most interesting ways.

Amitabh Bachchan shared a couple of  greeting cards to wish his fans on the special occasion. He wrote, Happy Lohri, prosperity and peace on Twitter.

Filmmaker Karan Johar also took to the microblogging site to wish everyone.He wrote, #happylohri to one and all. May this festival ring in the positivity and light we all need.

Kangana Ranaut shared a throwback picture as she remembered about Lohri celebrations back in her home town of Himachal. In the caption, the actor wrote about the Lohri tradition in her hometown. She said when he was small, children made groups and sang Lohri songs in neighbourhoods. They collected money, sweets, said the actor, adding that children living in villages and with joint families have more fun than those living in cities with nuclear families.

While Taapsee Pannu shared a picture of herself enjoying the bonfire. She posted a heartfelt Lohri’s wishes for everyone, which she captioned as, Happy Lohri with a popular song ‘Sundar Mundriye’ as the background music.

Manoj Bajpayee also extended warm wishes for the festival on Twitter. In fact, the actor had something special to treat his fans. He tweeted, Something is cooking, going to show up on your table at 12:30pm !! HAPPY LOHRI.

Facebook
Twitter
Pinterest
WhatsApp
Previous articleRahul Gandhi hits out at Centre over its affidavit in Supreme Court to stop farmers’ tractor rally
Next articleManish Sisodia: Delhi schools to reopen January 18 for Classes 10 and 12

The Congress Working Committee on Friday decided that there will be a new elected Congress president in June 2021 after a meeting...
Read more
Load more